Tomatoes Coming Out My Ears! 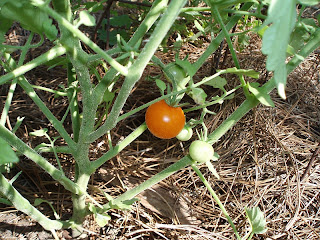 In honor of the first tomato of the season (a Sungold, seen at right), I thought I'd put up a list of all the tomatoes I'm growing this year.  I went a bit crazy so it's a long list, but I'm hoping to save seeds from the heirlooms to offer for sale as a fundraiser for the Spicewood Pea Patch.

I started out this year starting seeds of my top faves: Brandywine, Cherokee Purple, Mortgage Lifter and Matt's Wild Cherry.  I was going to start another round of a few more heirlooms, but didn't get around to it.  Then the plants started coming in at work.  Uh-oh.

For years, I've wanted to grow more heirlooms to taste-test them for myself.  Some years I actually did grow quite a few, but would get them in so late they didn't produce, or they'd suffer some horrible blight or devastation-by-fence-jumping-cow or ... or ...  You know how it goes.  But us gardeners are an optimistic lot.  This year, I said, This year will be my year!  It's still early!  I can beat the heat!  The mesquites are leafing out and Grandma always said that means no more frost!  I can do this!

So I grabbed a few different kinds and planted them in a second row, next to the already-full one of the seedlings I'd started.  I filled that second row (ten plants) quickly, but kept seeing more kinds I had to have.  So I thought one more row and that's it.  Yeah, right.

Four and a half rows and forty plants later and I still have five to plant.  I'm insane.

Heirlooms and OPs:
Cherries:
Matt's Wild Cherry ~ I'm about convinced that this is the same as Texas Wild, a currant type found growing on the Texas/Mexico border around 1900, though Johnny's Seeds says it is from a woman who brought it to Maine from her home in Hidalgo, Mexico, then gave it to a university professor named Matt who then gave it to them.  Produces loads of tiny, red, tart tomatoes.  Good acidity.  Found this little ditty on the 'net: "Matt's Wild Cherry! Indeed it is swell; Delicious as ''heaven'', Prolific as hell." *snicker*
Riesentraub ~ German heirloom whose name translates as "giant bunches of grapes", though this isn't a grape tomato. Red fruits are about 1".
Red Pear ~ Red, pear-shaped, cherry sized tomato an inch or two long.
Yellow Pear ~ Yellow, pear-shaped, cherry sized tomato smaller than Red Pear.  The color is incredible.  They look like little jeweled Christmas ornaments hanging on the plant.  Incredibly productive, so much so that I get tired of eating them and make salsa from them.  It's gorgeous, all golden yellow with green flecks of jalapenos and cilantro and red onions.


Paste/Plum:
Amish Paste ~ Good for canning or drying. Red-orange plum to oxheart shaped fruits are 8-12 oz. From the Amish near Lancaster, PA.
Principe Borghese ~Determinate.  Red, 1-2 oz. fruits are good for drying, maybe not good for cooking but I'm going to try it.  Italians hang the entire plant, fruit and all, to dry. I think I'll try the oven method: just put them in a barely-on oven for 24 hours, then put in jars or olive oil.
Roma ~ Determinate.  Red, plum shaped, medium sized fruits.  I read somewhere that it can be cut back after harvest and second harvest will be ready in a month or so.  I think I'm going to try that.  A mid-1900s introduction bred from Pan American (descendant of Marglobe), San Marzano and Red Top (possibly a descendant of Italian Red Pear, which may be a San Marzano strain).  Supposedly, I can scald them, slice off one end and squeeze the other to skin them.
San Marzano ~ Indeterminate.  Red, medium sized, longer and more pointed than Roma.  Many sources say this is the quintessential paste tomato for sauce, being widely grown and treasured in and around Naples.  Said to be from Campania region of southern Italy, brought there from Peru in 1770.

Slicers:Note: still working on adding descriptions to these.
Arkansas Traveler ~ Medium sized pink tomato.  Supposed to produce well in the heat.  Might actually be Traveler or Traveler 76.
Black Giant ~ Beefsteak type, 6-12 oz. Originally from the Baltics.
Black Krim ~ Beefsteak type up to 12 oz.  From the Isle of Krim in the Black Sea off Russia. Supposed to have a slightly salty taste.
Brandywine ~ Pink beefsteak type up to two pounds. THE heirloom tomato, the one you want if you want that old fashioned tomato flavor.  Seeds offered in 1982 by Seed Savers Exchange who got them from Ben Quisenberry who got them from Doris Sudduth Hill whose family had been growing them for 100 years.
Cherokee Purple ~ One of my faves.  Large, beefsteak type that produces well in the heat.  Seed given to a Tennessee man's family by the Cherokee Indians 100 years ago.
German Johnson ~ Large, pink beefsteak type up to a pound or more.  Mother of Mortgage Lifter.
Golden Jubilee ~ Yellow beefsteak type around half a pound.  Supposed to be great for juicing and so big that one slice hangs off the sides of your hamburger.
Green Zebra ~ Small (4 oz. or so), striped green tomato that turns slightly yellowish when ripe.  A "created" heirloom, only been around since 1980 or so.
Hillbilly Potato Leaf ~ 85 days.  Yellow beefsteak streaked with red on the blossom end.  Up to a pound.
Kellogg's Breakfast ~ 85 days.  Orange beefsteak, 1-2 lbs. or more.  West Virginia heirloom. Described as the color of orange juice and suposed to be very meaty with few seeds.
Japanese Black Triefle ~ Triefle=truffle.  74 days.  8-10 ounce pear-shaped, deep purple-black tomato with green shoulders.  Russian tomato despite the name.
Mortgage Lifter ~ 82 days.  Huge pink beefsteak, 1-2 lbs. or more. Meaty with few seeds.  The full name is Radiator Charlie's Mortgage Lifter and there's a great story behind it.
Old German
Oxheart
Persimmon
Silvery Fir Tree
Snow White
Striped Cavern
Striped German
Yellow Belgian Giant
Variegated

Hybrids:
Defiant ~ Every time I think of this one, I imagine a fat little red tomato shaking it's fist at me and saying, "You want a piece of me?!"  Why, yes. Yes, I do.
Juliet ~ A red grape tomato that customers at the Natural Gardener have raved about for years, so I had to try it.
Sungold ~ Another one customers have raved about, but this one's an orange cherry.
Viva Italia ~ A paste tomato that I probably won't grow again since it's owned by Seminis Seeds, who in turn are owned by Monsanto.
Solar Fire ~ F1, unfortunately, but maybe I'll try to stabilize it one day.  Determinate. Red, medium sized fruit.  Produces well in the heat.

A couple of these I haven't even planted yet, but hope to this Thursday when we get the addition to the garden ready for planting.  Garden addition?  Yeah.  I ran out of room. Don't judge me! ;)  I'd already planned on "The Year of the Bean", where I'd try many different kinds of beans to find the perfect one, so that was going to take up a lot of room already.  So when I went a bit crazy on the tomatoes, it took up most of the rest of it.  No room for corn, sweet potatoes or black eyed peas!  Must. Be. Fixed.

Two of the ones I haven't planted yet (Snow White and Defiant) were grown by Judge Harley Clark, a wonderfully interesting man who worked with us at the Natural Gardener weekends this spring.  He was our tomato expert, dispensing advice on vegetables in general.  I learned a lot from him, like how to recognize Early Blight and other tomato problems.  I was rather let down to hear that his last day was this past Sunday, but he'll still be bringing us transplants, so I'll get to see him again.  And hopefully they'll bring him back when it's planting time again.