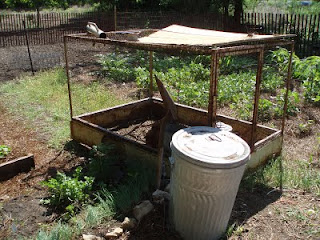 Chickens!  What a wonderful thing to have in the garden.  But only if they're cooped so they don't eat your tomatoes.  Because they will.  The easy solution?  A chicken tractor.

A chicken tractor is a portable, bottomless chicken coop.  They're handy for multiple reasons: if you don't have the room for a full-fledged (get it? *giggle*) coop, if you don't want to let your chickens free range but don't want to take up a ton of space or expense for a fenced run, or if you want to clear an area of noxious weeds.

The latter is why I have one.  I have places in the garden where I'm fighting bermuda.  If you've ever tried to get rid of that stuff, you'll understand perfectly why I say that after a nuclear apocalypse the only thing left will be roaches driving Dodge Darts down roads choked with bermuda.  That stuff is pure evil and it's roots go all the way down to hell.  But it does have an Achilles' heel: shade or chickens! 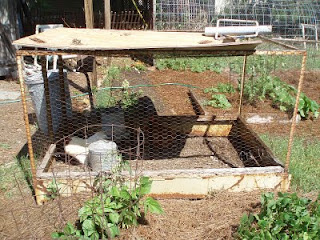 Before the chicken tractor, one of the only ways I'd ever successfully gotten rid of it was to cover the area with black plastic and leave it on for months (or longer).  I'm not talking about solarizing the soil.  This isn't using heat to kill it since I don't think even 140 degree temps would do it.  It's shading it, taking away the sunlight for an extended period of time.  That does it.  But it takes a long time and black plastic isn't only rather expensive, but it breaks down in the sun after a while, leaving pieces all over the place.  I did try covering it with bark mulch once, but that just added more expense and time.  So this method is very successful and doable, but not quickly or easily so.

Then I found out I could do repeated tillings and rakings.  This would remove as many of the pieces as possible.  I'd need to be vigilant in looking for sprouts and digging them, but that wasn't too bad, and fairly effective.  Since the soil was soft and loose from the tilling, I could fairly easily dig all the pieces out, removing all of it and not leaving any to sprout again.  But this, again, wasn't optimum: it still entailed hooking up the tiller and tilling, and sometimes the bermuda was in places I couldn't get to easily with the tractor.  I still do this, but only on big new easy-to-get-to garden plots. 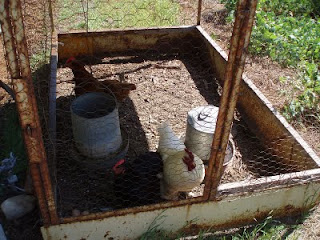 This year, I'm trying a new way to get rid of some bermuda: sheet mulching.  You put down a thin layer of compost, then cover that with mutiple layers of newspaper and then a layer of cardboard, then top it with either mulch or a raised bed and water it often.  The idea is that the layers shade the bermuda, weakening it, then the beneficial bacteria and fungi in the compost finishes it off.  I did only one layer of cardboard, so I see sprouts in places where the bermuda could get up through the holes in it, but otherwise so far so good.  This might be a good way to start new beds, but I kind of don't like that the soil underneath the new bed won't be tilled. I'm sure it will eventually soften up over the years, but that still seems like a long time.  Plus, what if you want a new bed there, but don't want to build a raised one?  I'd still maybe use this method to kill bermuda in places I don't intend to put a bed.

But enough about bermuda.

When George and I were enlarging and fencing the garden earlier this year, we had to move the chicken coop.  The coop is actually a giant chicken tractor of sorts itself.  It was my first greenhouse made of cattle panels and built to be portable so I could move it when I needed to.  I built a bigger greenhouse, so I decided to cover the old one with chicken wire and use it as a chicken coop.  It worked great not only for keeping the chickens in, but for clearing more area for more gardening space, as you can see in this picture (which is a baby picture of my current garden ~ the chicken coop is sitting in the area where the potatoes currently are).  You can see how I'd moved it over a few times over the course of a few months (I had more chickens then) and tilled.  But after a few years of being out in the weather and moving it around, it'd gotten weak.  So when we moved it this last time, it kind of fell apart.

We couldn't leave the chickens in there, so we moved them to a cage that's been around since I was a kid.  Don't know where Daddy got it originally, or even if Grandma Wall had it first.  But it's so handy!  It's made of metal, so is heavy enough that even a pack of marauding neighbor dogs wouldn't be able to turn it over.  I've used it to hold various animals over the years, and it's where I put out new chicks when they're old enough to be outside, but not quite old enough to be put in with the bigger birds.  It's really cool when I get to do that.  I usually put it just outside my bedroom window so I can keep an eye on them, and on the owls that come to investigate what they hope is an easy snack.  Too cool.

Anyway, I decided to put the chicken tractor over a few spots of bermuda I couldn't get the big tractor to.  I didn't feel like dealing with more compost-cardboard-mulch, and quite frankly couldn't afford to spend more on mulch and such that I couldn't use in the garden.  So I thought to put the chickens on those spots and leave them there.

It worked great!  As you can see in the picture at right.  (Notice the hen's caught a grasshopper.  Good girl.)  Since that picture was taken, we've moved the tractor to the right to kill out more of the bermuda that's there, and we'll keep moving it on down 'til they've gotten it all.  I also used it on the sitting spot, clearing out the bermuda and weeds so I could mulch that spot and move in the table and chairs.  Sweet!  And oh-so-easy.

The way it works is the chickens graze down the grass and other greenery inside the coop, then they constantly eat any sprouts that ... well, sprout from the bermuda rhizomes, weakening them until there isn't any energy left in them.  It doesn't take long.  As a matter of fact, I'd inadvertently put the waterer stand over some bermuda once, shading it completely.  Yet when we moved the chicken tractor later, the bermuda under there was still very much alive.  That showed me that even shading with plastic isn't as quick as a chicken tractor.

A nice side benefit of doing this is that the chickens also get most of the weed seeds so you don't have to deal with them later.  The only weed that popped up again after moving was horse nettle, but hell, even Longhorns can't kill that stuff out.  And still another nice thing about this: chickens poop, so the area you are making into a new garden bed is pre-fertilized.

And I just have to show y'all this.  In a post about birds in the garden.  Found just inside the garden shed door. 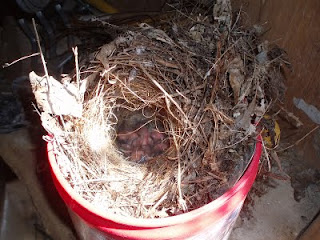 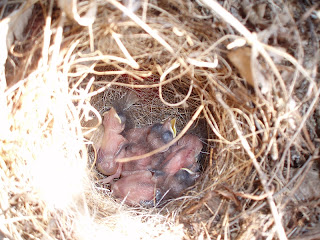