Pictures with the New Camera

I got a new camera, so I took it out to play with it today. 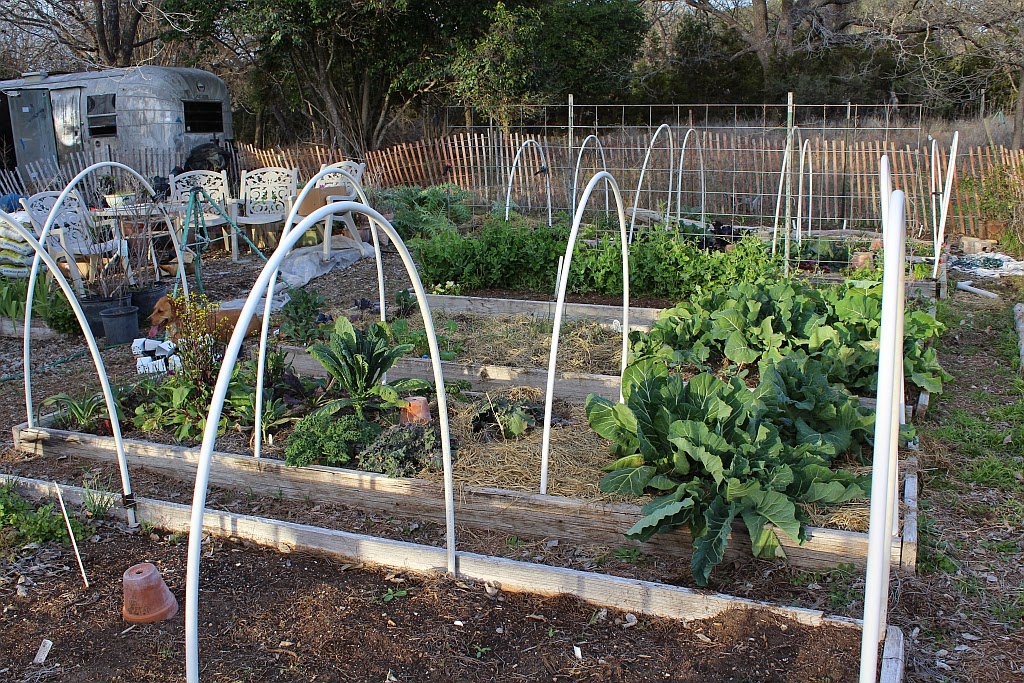 I love winter gardening.  Everything grows so much slower,
so it's easier to keep up with.  The bugs move slower, too.  Love that.
You don't have to kill yourself watering so much, and it's hard to
get heat stroke working in a winter garden.
Everything is just much more forgiving. 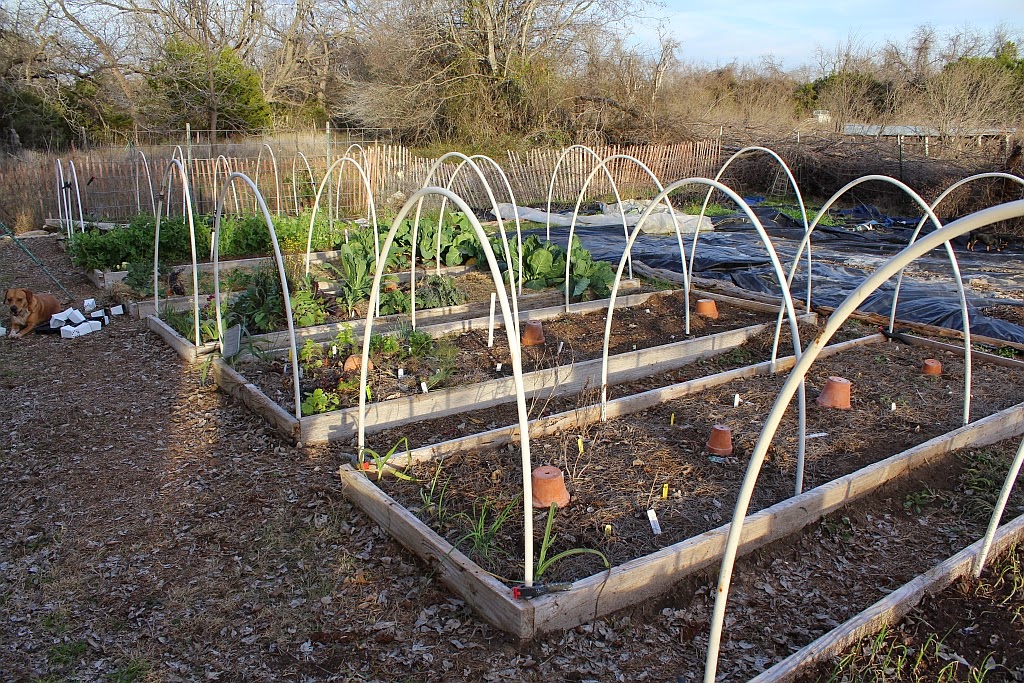 Got the onions planted.  Last year the Texas Early Whites kicked butt in the
keeper category.  They lasted 'til November before they started sprouting.
All the rest long since had.  So I definitely planted more of them.

And since there's no such thing as a bad onion, I had to plant some of all
the others, too.  There are few things better than a red onion
pulled fresh from the ground.  I love to eat them with mayo and bacon.
My own version of a BLT - a BOM. 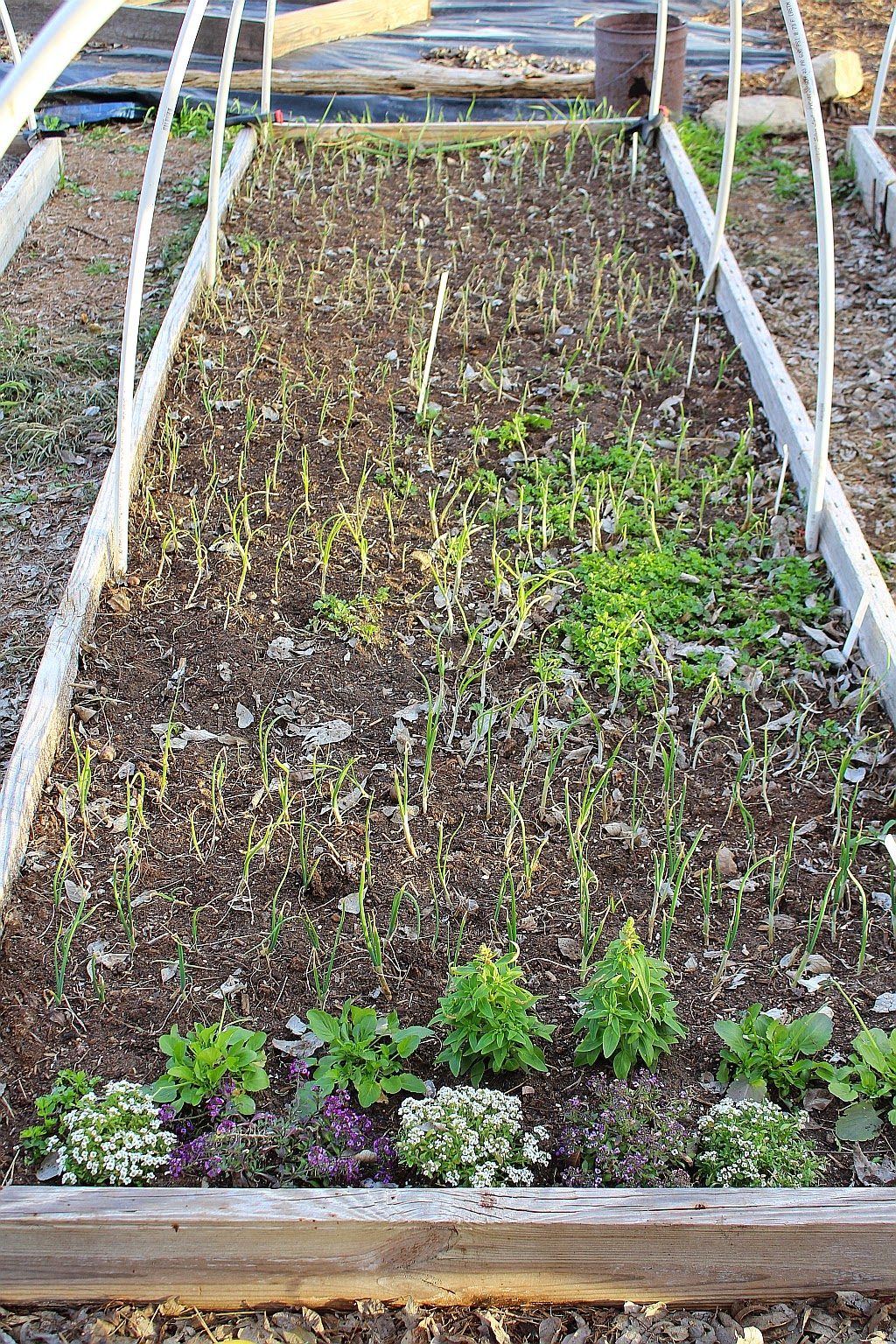 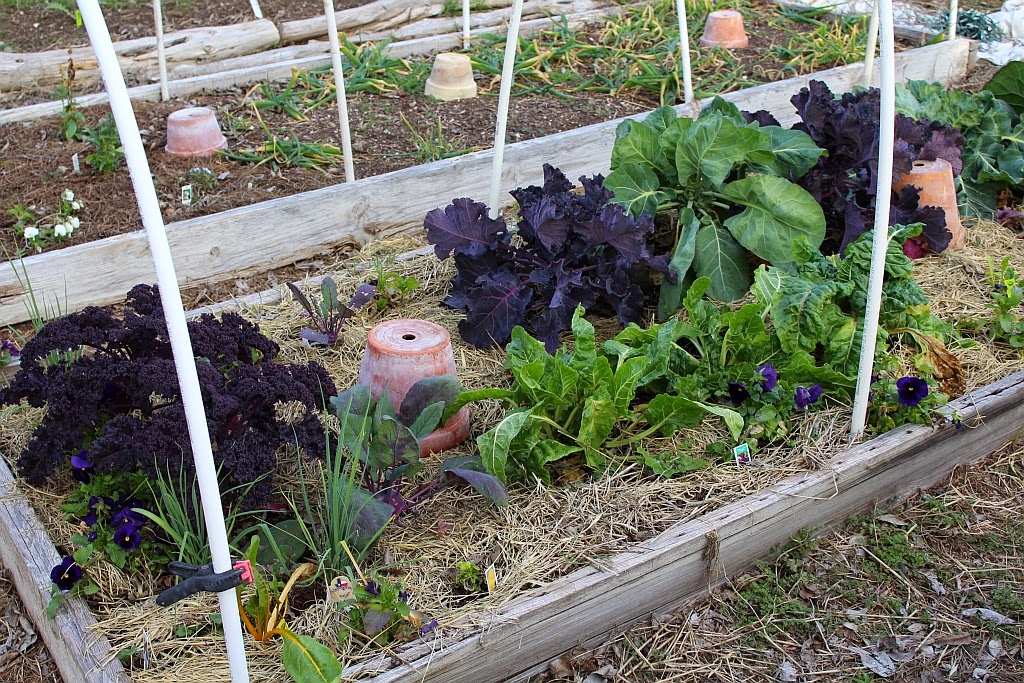 Sprouts are hard to grow in Texas.  They're really new "branches" or "heads"
of the plant growing on the sides of the stalk, so need a long, stable cold
period to grow without wanting to open up their little leaves.  Mine are already
starting to open, probably because it was 82 degrees the other day.
But since the entire plant is edible (and I love them the most),
I think they're worth a spot in the garden.

Purple, red and blue colors in fruits and vegetables are from anthocyanins.
While they are antioxidants, it hasn't been proven that they actually do us
any good.  I disagree.  Since seeing so much purple in my garden
and then on my plate makes me deliriously happy
- because PURPLE! -
I claim it DOES do me a lot of good.


Collards in the front.  Time to make a mess of them.  Mama was from Jackson, Mississippi, so I come by my love of them honestly. 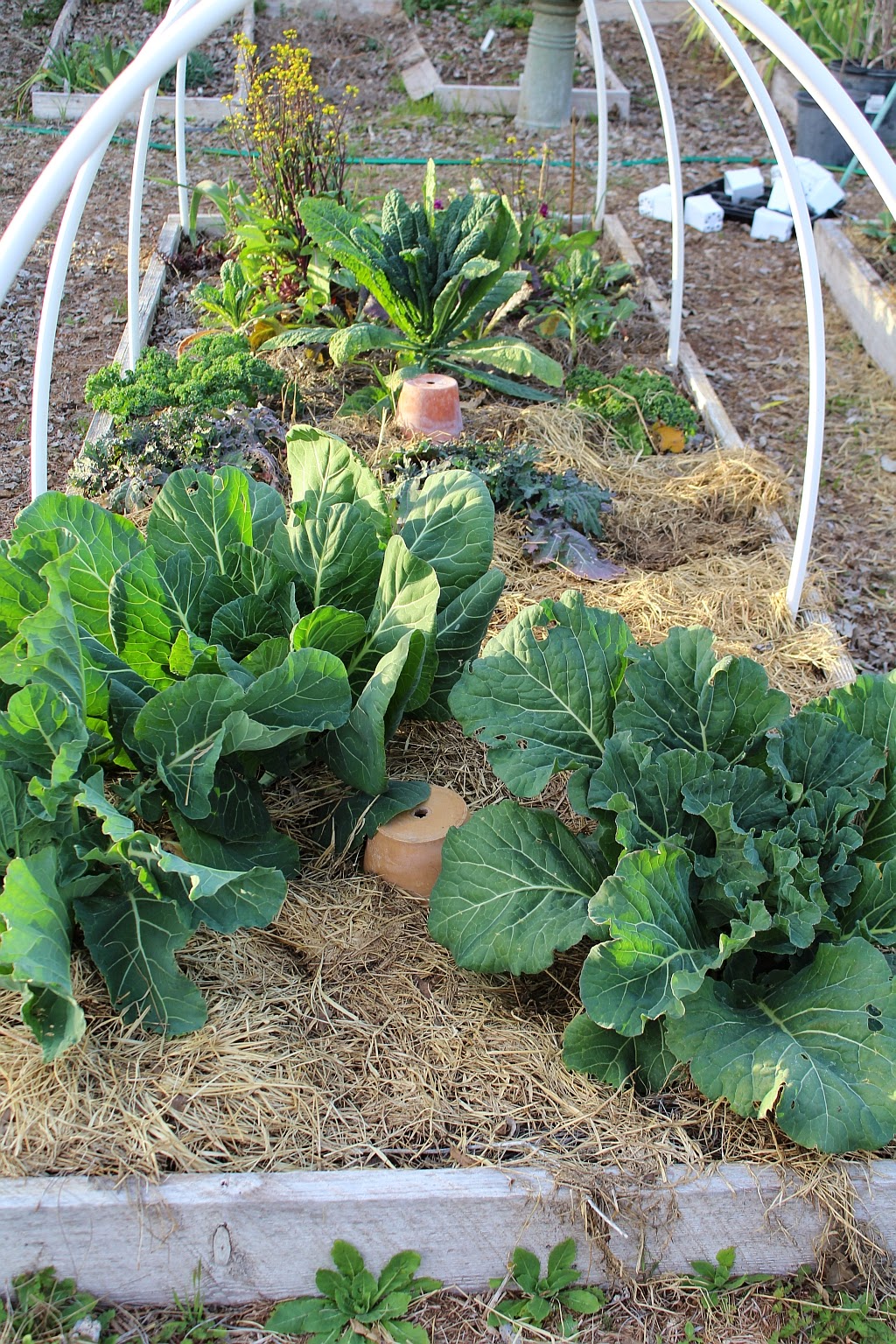 Cauliflower and Romanesco, just starting to head up.
See how the leaves in the center are all pursed together like they're
puckering up for a kiss?  There's your sign. 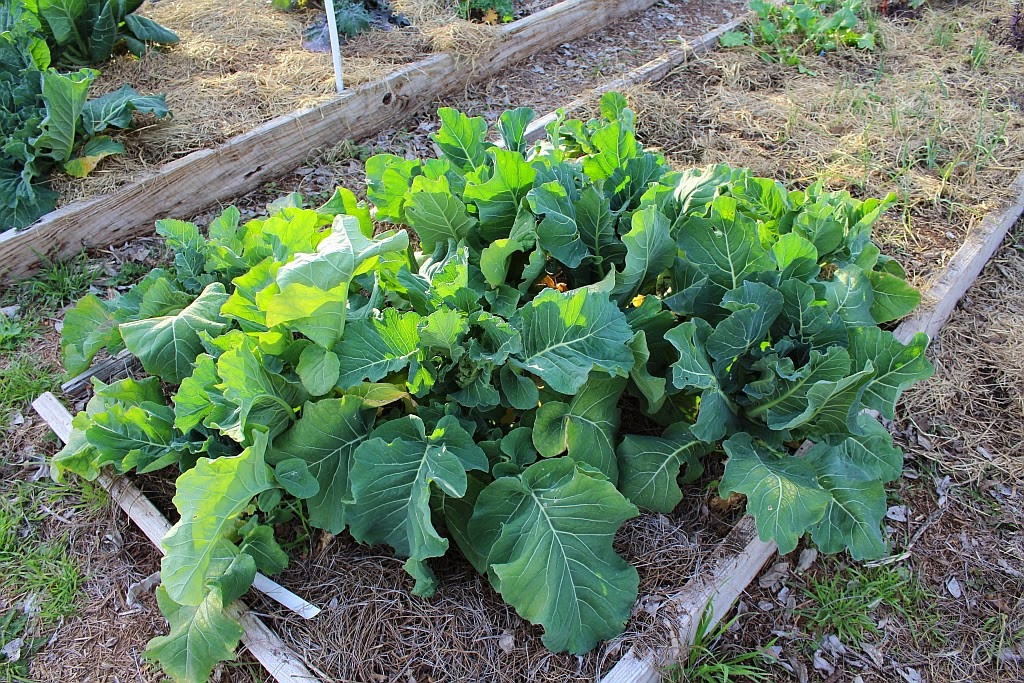 More kale.  The one on the right is one of my favorites - Red Russian. 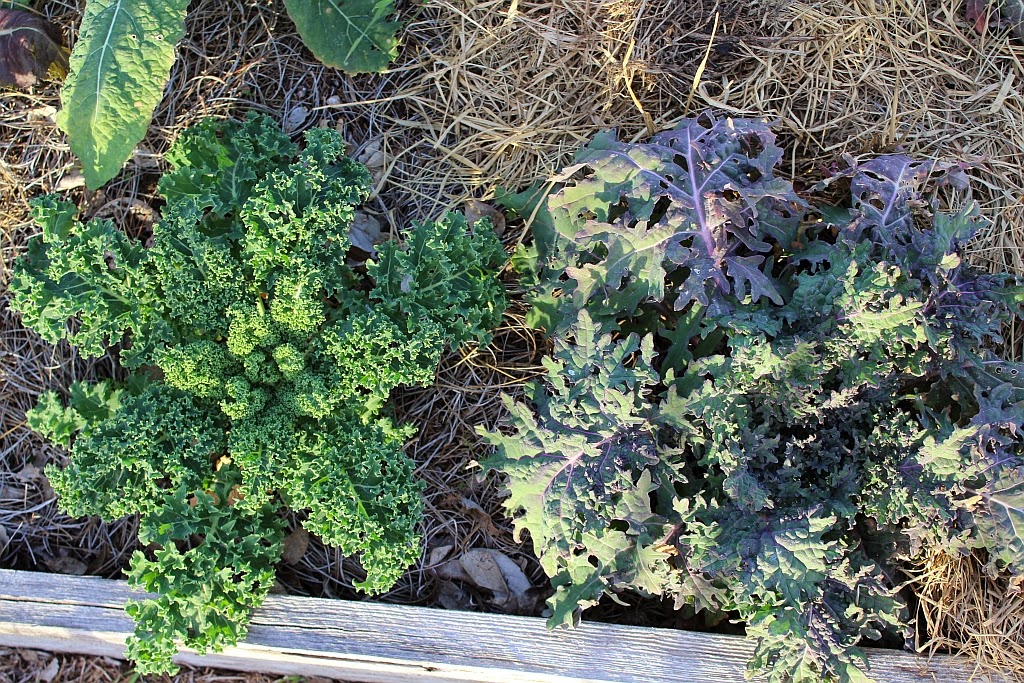 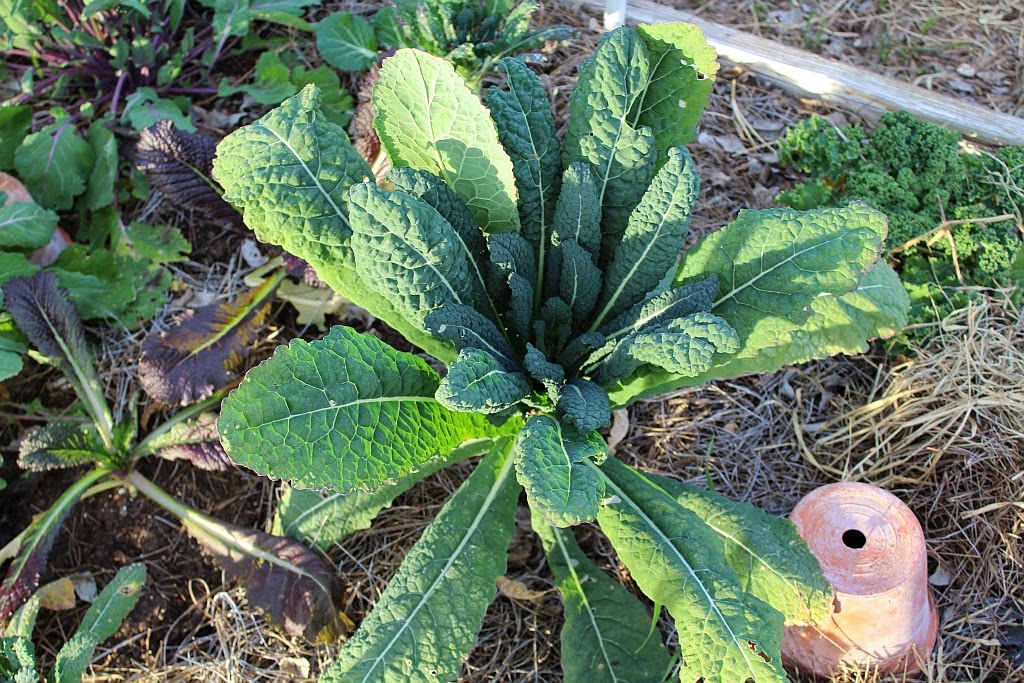 Hon Tsai Tai sprouting broccoli.  I want to harvest some,
but the bees are loving it so much I'd feel guilty.
But maybe there's enough for me, too. 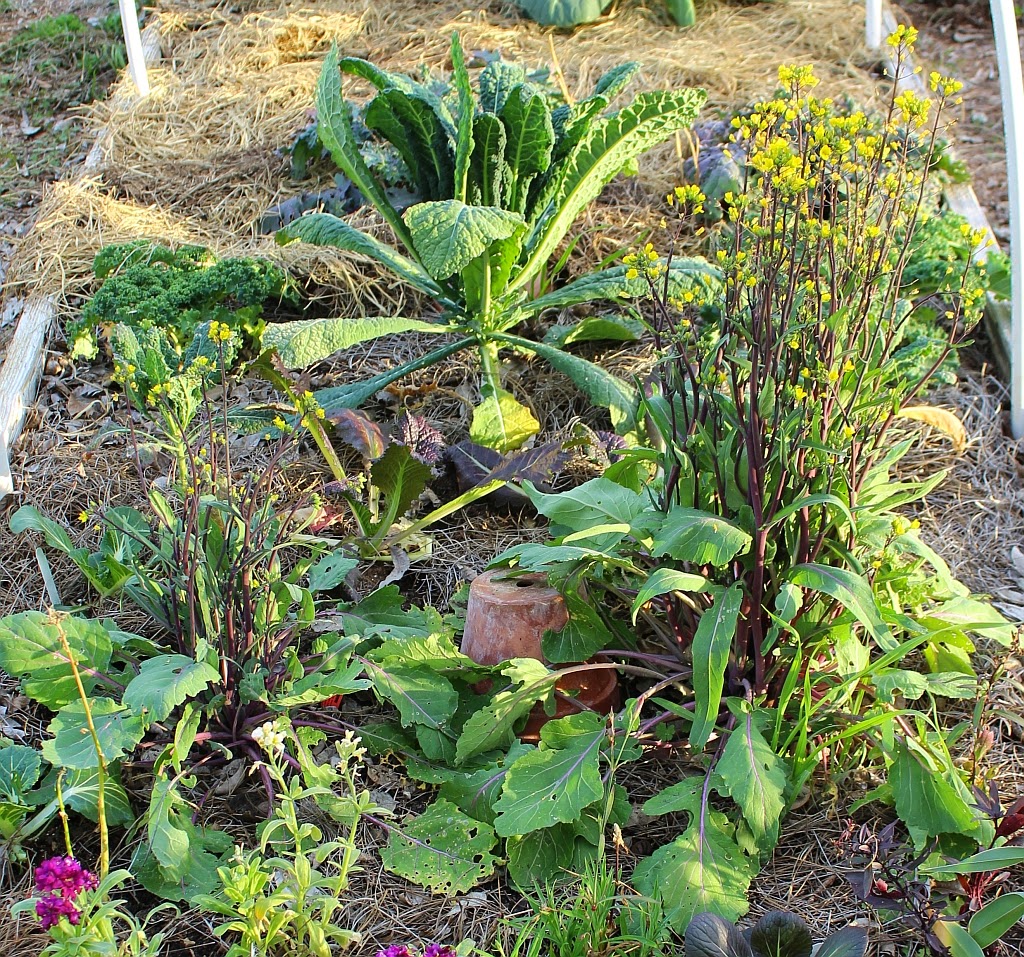 And the artichokes.  I need to fertilize them and give them some compost.
I've really neglected them, but they keep giving me 'chokes every year anyway.
Not bad for a glorified weed.  A thistle. 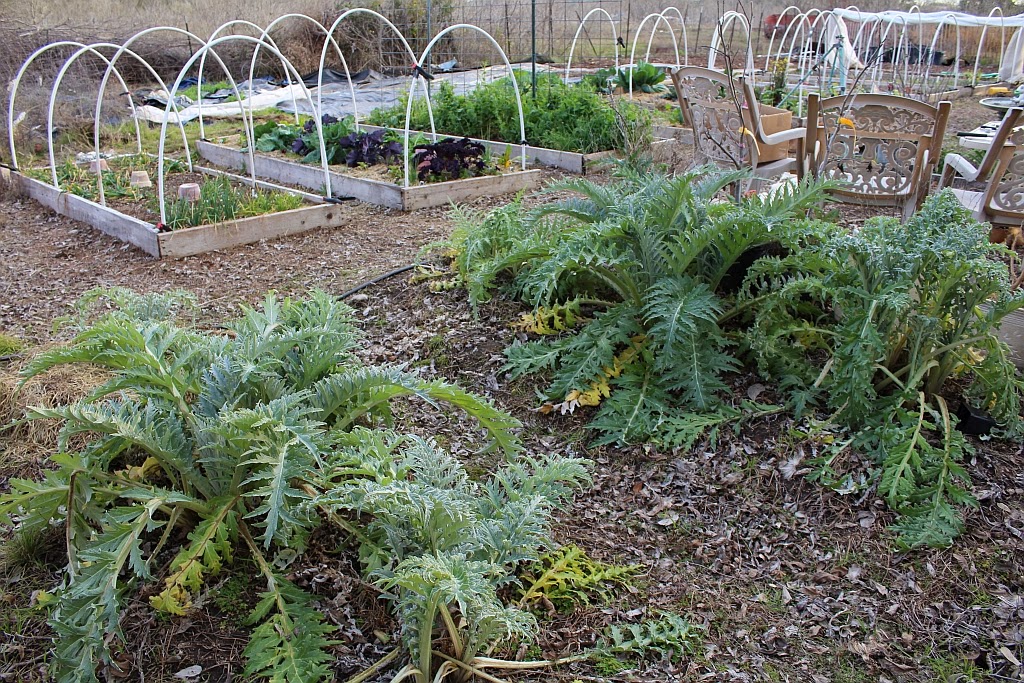 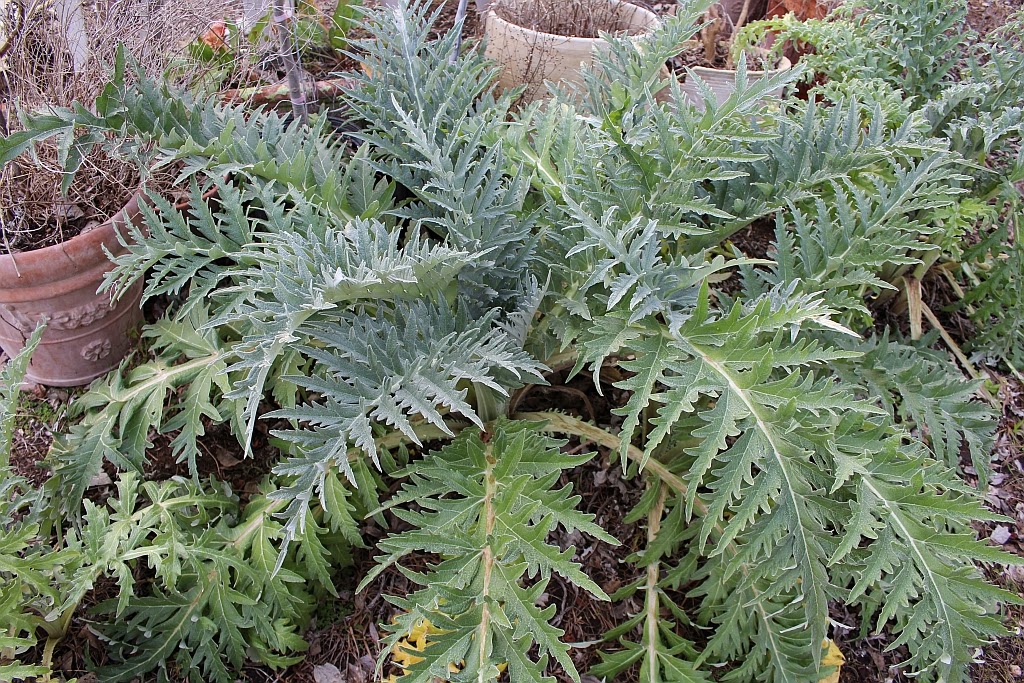 It's so interesting how the same type and cultivar of plants can have such
different leaves.  Georgia collards do that, too. 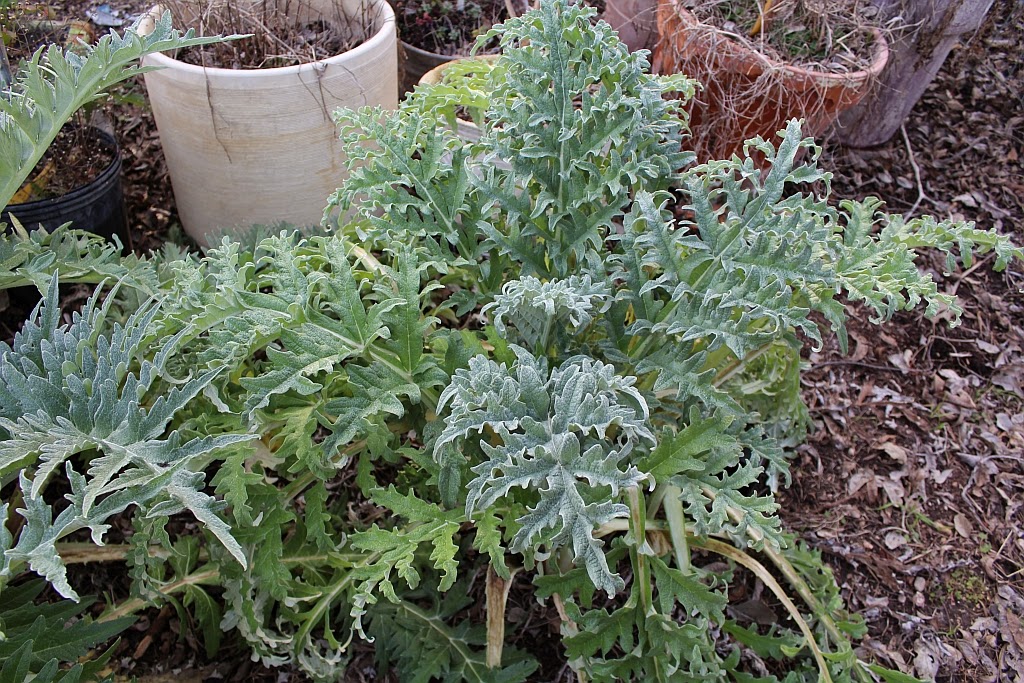 Mmmmmm, dinner.  I ate it up with some butter and chicken
fried up in my cast iron skillet. 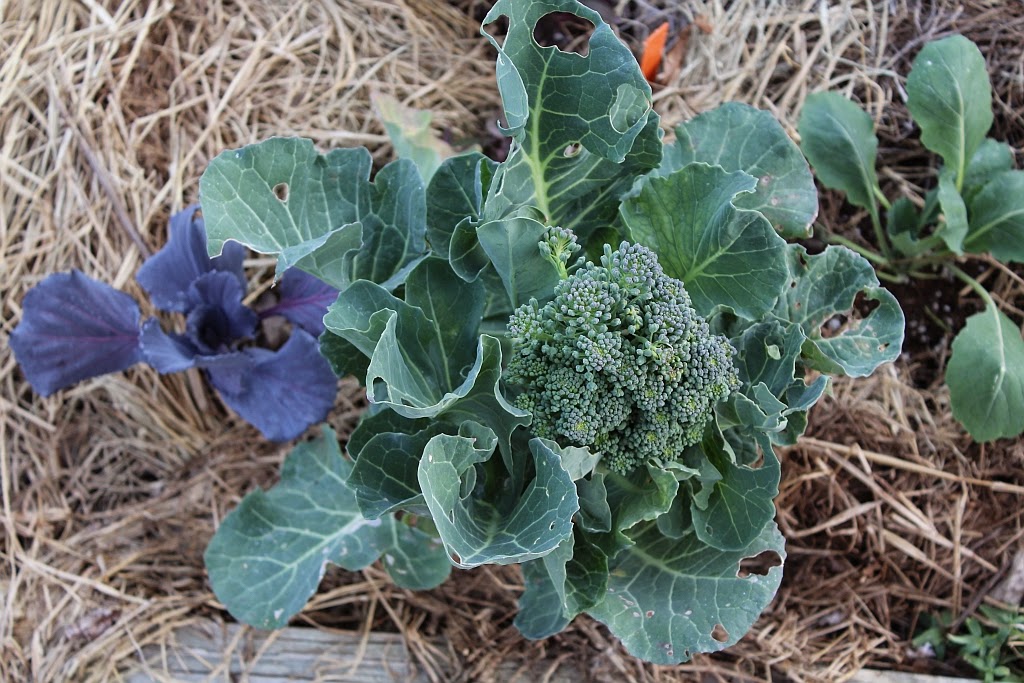 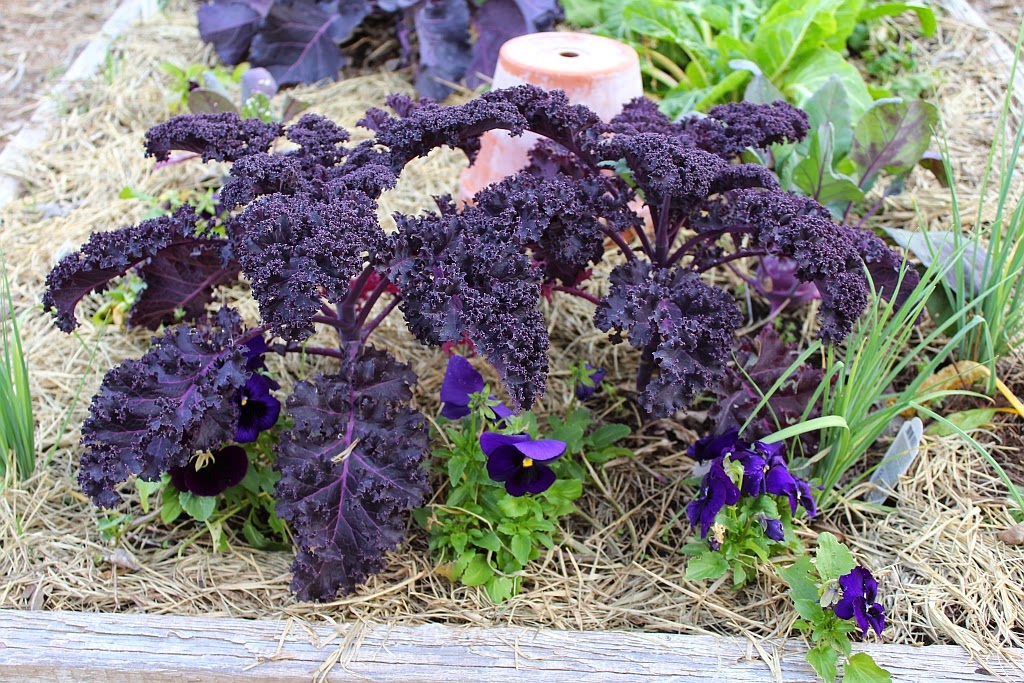 It's pretty with green. 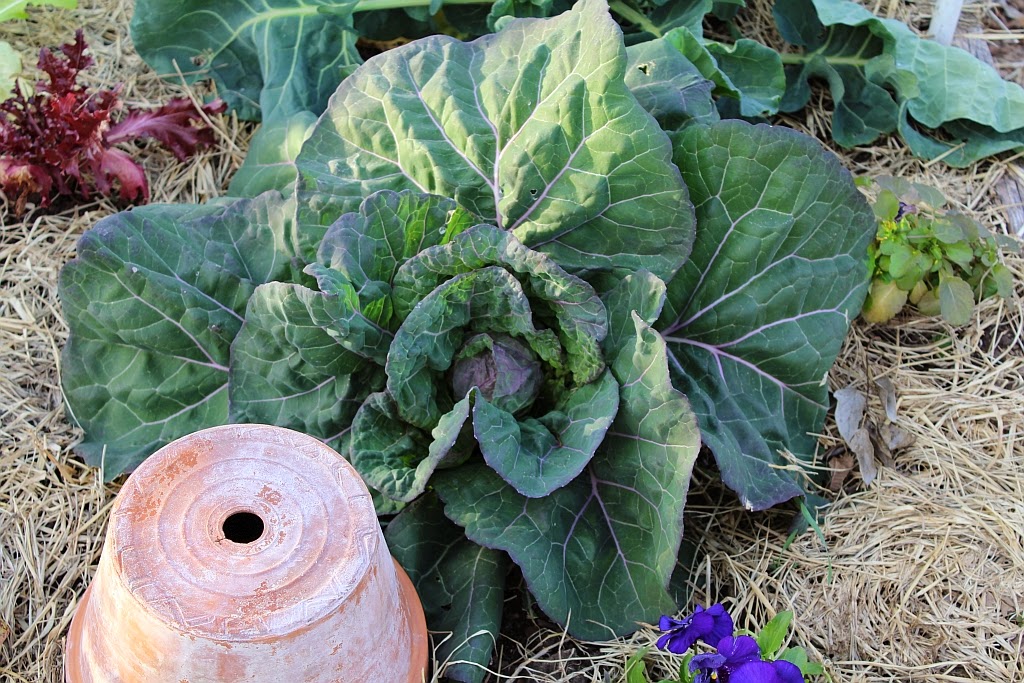 It's pretty alongside green. 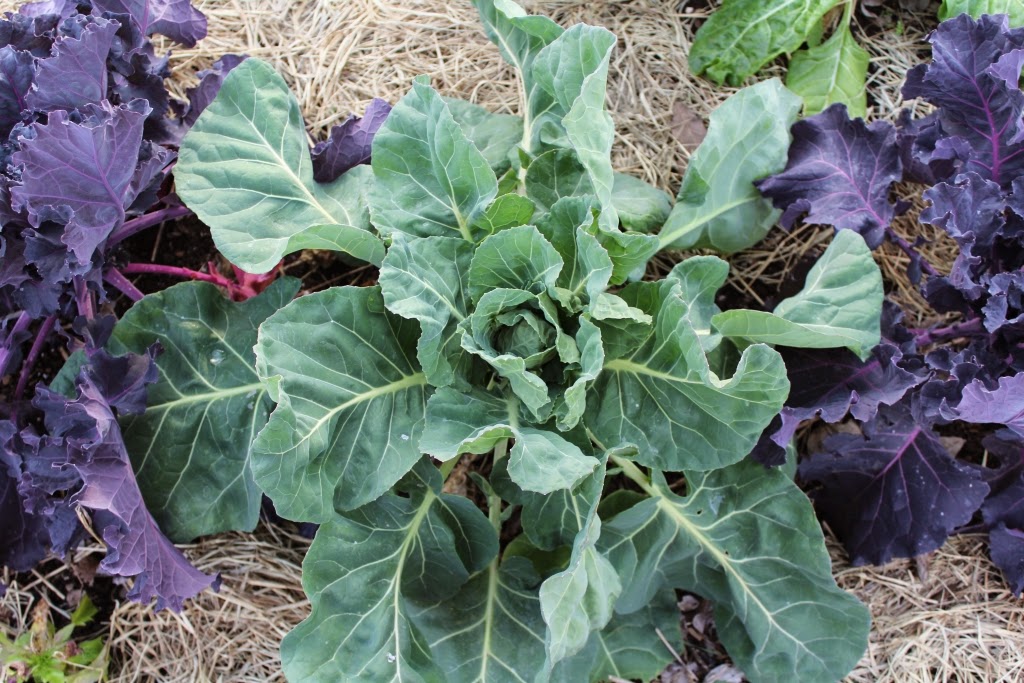 And it's pretty instead of green. 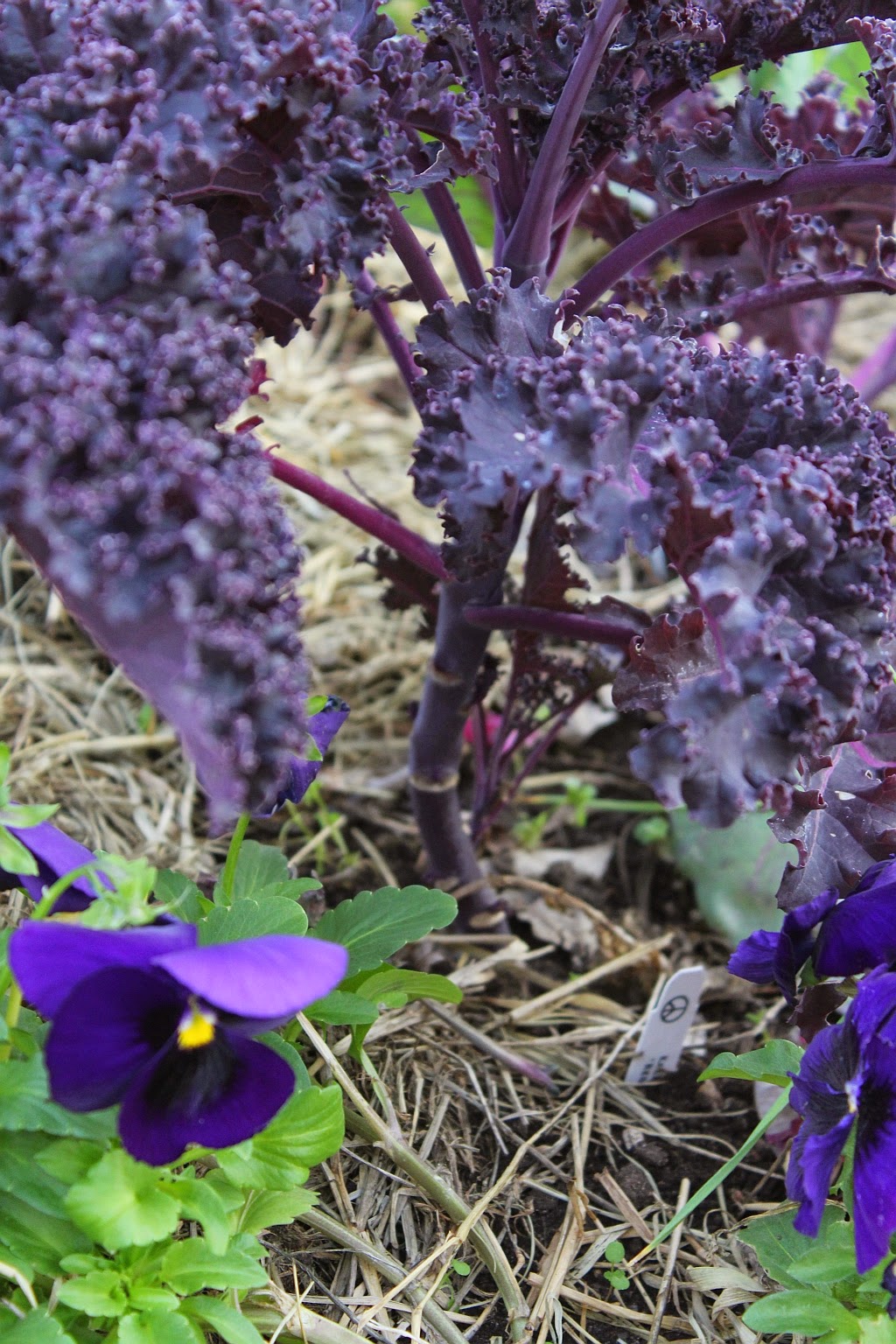 The Perfect White Cake, from Cooks Illustrated by way of I Am Baker.

I've made this in all kinds of ways: regular wheat, gluten free, all purpose flour instead of cake flour (*without* added corn starch), even forgot the vanilla once (accidentally putting in extra almond flavor instead), and it has always been fab.

It's springy-soft, but dense enough for fondant and stacking. (Full disclosure - I have yet to stack anything bigger than a three-tier, 8"-6"-4", so not sure how it'd hold up if you try stacking a 14" one or so, but I'd think it'd do well with good support.)

It isn't bright, clear white, but if you need that level of whiteness for a wedding or such, I'd try bleached white cake flour, clear vanilla, and substitute solid-at-room-temp coconut oil for the butter. I've used coconut oil instead of butter or shortening in other baked recipes, and it's always great. Make sure your almond flavor's clear, too. I've not tried this level of changing up the recipe so you would want to do a test run of course, but can't imagine that it wouldn't work quite well.

Just a note: bleached white flour is just that - bleached.  So in no way is it organic or even halfway healthy.  Would I ever use it?  I'm not sure.  Maybe.  Only if it was a very special circumstance when regular yellowish flour wouldn't work.  But I surely wouldn't do it often.  Everything in moderation.

Also, it may need baking for longer than the 25-30 minutes given in the recipe. Test at that time and see how you come out with it. I can't remember for sure how long at 350F, but experimenting today with baking lower and longer to get it lighter on the outside, it took an hour and fifteen minutes at 325. Came out beautifully.

It freezes well, too. I did an experiment with one once: wrapped it in three layers of plastic wrap, then in a ziploc freezer bag, froze it and kept taking it out periodically to taste test it, sometimes letting the whole thing defrost and sometimes just cutting a piece off and putting it back. Six months later and it was still *really* good, as good or better than when first baked.

And, if all that's not enough, since the flavor is so neutral (yet still OH-SO-TASTY!!), you can use just about any filling or frosting or icing or ganache you can think of.  ... Well, maybe not avocado.  Yeah, probably not that.  But I bet it would even be good with cheese.  Mmmmm cheddar.  And bacon.  Ooooooh!  Bacon cake with chocolate ganache!  Nomnomnom.  I'm going to the grocery store tomorrow...