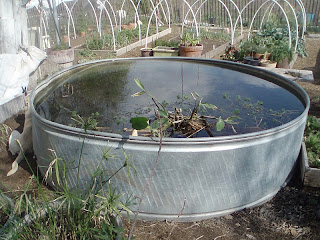 While cleaning out the goldfish pond yesterday (the one currently up there in my header image picture) and setting up a new one, I thought it would be a good idea to do a post about it.  So I started taking pictures.

Water gardening is easy!  And fun.  It brings in lots of wildlife, gives you muck to add to the compost pile when you do the big spring clean-out, and adds a touch of serenity to your landscape.  Want a goldfish pond for your yard?  It's as easy as going to Tractor Supply or your local feed store, buying a galvanized horse trough, and filling with water.  Voila!  Insta-Pond!

Besides being easy to set up, horse-trough ponds are portable.  This is handy if you're renting ~ you can just empty it, put the fish in a bucket and plants in garbage bags to contain the wetness, and off you go. 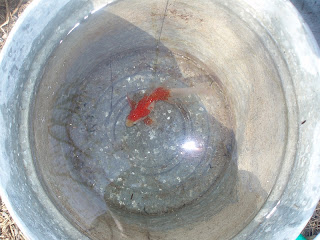 And if you've always wanted an in-ground pond but aren't sure where you want it, get a trough, set it where you think you'd like your pond, and live with it for a while first.  It'll help you find pitfalls that you'll only encounter when actually doing it.  Believe me, it's MUCH better to find out BEFORE you spend uber-bucks on a liner and many backbreaking hours digging that the pecan tree hanging over that "perfect" spot drops tons of leaves right into the pond.

As with anything new you learn, there is a learning curve.  But if you follow this advice above all else ~ LOTS of plants, few fish ~ you'll do fine.

Materials and price list ~ everything here varies so much, so these are only guesstimates: 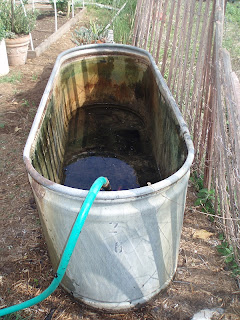 A mature pond, one that's been there for a few months at least, is an ecosystem in and of itself.  Insects and frogs move in, laying eggs in the water that hatch, providing some food for the fish.  The fish poop in the water.  Every surface below the water eventually gets colonized by beneficial bacteria that filter out that fish poop and other nutrients from rotting plant refuse.  They turn those things into plant food that the plants then filter out of the water, using that food to grow.  As long as you keep a good balance of few fish and many plants, the pond pretty much takes care of itself.


It's always good to feed the fish a little, but go easy on it.  Too much food and it'll foul the water.  And don't feed them if it's cold, since they won't be able to digest it and it'll make them sick ~ I use a water temp of 60 degrees as my cutoff. 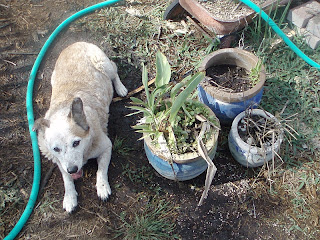 Same with fertilizing the plants.  Most of my pond plants go crazy even if I don't feed them.  When cleaning out the pond, I found that some plants in one pot had grown so much that they'd busted through the pot.  Good thing it was a plastic one.  But still sometimes I'll add a little bit of food to the soil when repotting in spring, especially for the blooming plants.  You can use those tablet fertilizers specifically formulated for ponds, but I like wrapping up a half tablespoon or so of a granular organic fertilizer in a paper towel and burying three or four of those little packages in a pot.

Speaking of potting those plants, you don't have to just use ugly old plastic ones.  Those work best for lilies since you're just going to sink the pot to the bottom of the pond.  But for margnials and bog plants, ones that grow out of the water, you can put them in a pretty pot and set it up on bricks and blocks so that it shows out of the water.  Many marginal plants and bog plants actually grow better that way than the traditional way ~ setting the pot low enough that water covers the rim.

When potting plants to put in your pond, don't use potting soil or any other kind of soil that's high in organic matter.  It'll float out of the pot, dirtying the water, and what does stay put will eventually rot, adding too many nutrients to the soil that contribute to an algae bloom.  Just find the poorest soil in your landscape and use that.  Really.  The rockier, the better.

A note about fish: I know those koi are gorgeous, especially those gold ogon butterfly ones, but don't get them unless you buy a BIG trough.  They may be small now, but they grow fast, and man can they get big.  They need a lot of room to swim enough to stay healthy, and they create a lot of waste which can make them stressed and sick (and even kill them), so it's really inhumane to keep them in a small pond. 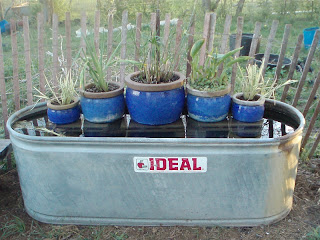 Another note about fish: Start with only a couple small goldfish, an inch or so long, max.  DON'T do what I did when I first started ponding ~ buy a dozen four-inchers from the bait shop and put them all in a small, newly-filled tank.  There are no bacteria to filter out the fish waste, so the water fouls quickly.  And when you have too many fish (and a dozen that size in a small tank is WAY too many), the water fouls even more fast.  How fast?  Well, I watched most of the fish die that first week, despite doing many water changes (putting a hose in it and letting it overflow to "rinse" the water clean).  I still feel guilty for that.

And when cleaning out the pond, don't take the word "cleaning" too literally.  Just get rid of the much at the bottom.  You don't want to scrub the sides.  That slime on there is really colonies of beneficial bacteria, the ones I mentioned before that clean out the fish poop.  If you scrub the sides and remove the bacteria, you'll likely experience an algae bloom while waiting for those bacteria to grow back.  No one likes pea soup in a pond.  Ick.

Now I'm off to shop for a water lily and some more fish!  And maybe a little fountain set-up.  And a bird bath specifically for the ponds.  And...


Update:
Here's what the new large tank pond looks like a week or so later.
This is NORMAL and will clear up on it's own over time. 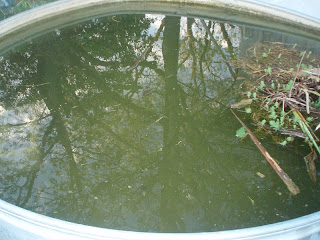 At the same time, the existing tank that I'd just cleaned out and moved was a lot clearer, though not completely clear.  The difference in water clarity is because of those beneficial bacteria I told you about earlier.  The smaller, older tank had a full colony of them all over the sides of the tank, so when I drained it, got the goop off the bottom, set it back up and refilled it, the bacteria were already there, and started filtering and changing nutrients right away.  They did take a bit of a hit because of the draining, removing old bricks (I should have put the same ones back in, but didn't), and refilling, so the water wasn't completely clear.  But it was a lot clearer than the new big tank.

The new pond doesn't have those colonies of bacteria all over the sides of the tank, so any nutrients in the water don't get changed into plant food.  They're still there, in the form of "bacteria food" which happens to be the same form algae likes, hence the algae bloom.  (Another reason for the algae bloom is all the sun hitting the water.)

Given time, those bacteria will colonize the sides and all other surfaces under the water and the water will start to clear (Also, once I get some lilies and more plants in there, they'll grow in and start shading the water to block that aforementioned sun, and the algae will lessen even more.).  That's one reason for the chunk of plants floating in there ~ to inoculate the water with those bacteria and give them a jump start (and because I didn't have time to repot them ;).

Don't worry if you don't have anything to inoculate the water with.  If you can find it at a water garden nursery, you can buy a bottle of "bacteria starter" or "filter starter", a liquid (usually) that contains these beneficial bacteria.  Or you can just let nature take it's course.  I like letting nature do it.  Cheaper and easier.

I also plan to gather up all the shards of broken clay pots, put them in a big plastic pot or basket, and sink them in the big pond.  The broken ones that are still mostly whole I'll put in there in such a way that they form "caves" for the fish to hide in.  This will add more surface area for more bacteria.  Since the big pond is the koi pond and they poop a lot (A LOT), that will help things in there.  And gives me a use for all those broken pots! 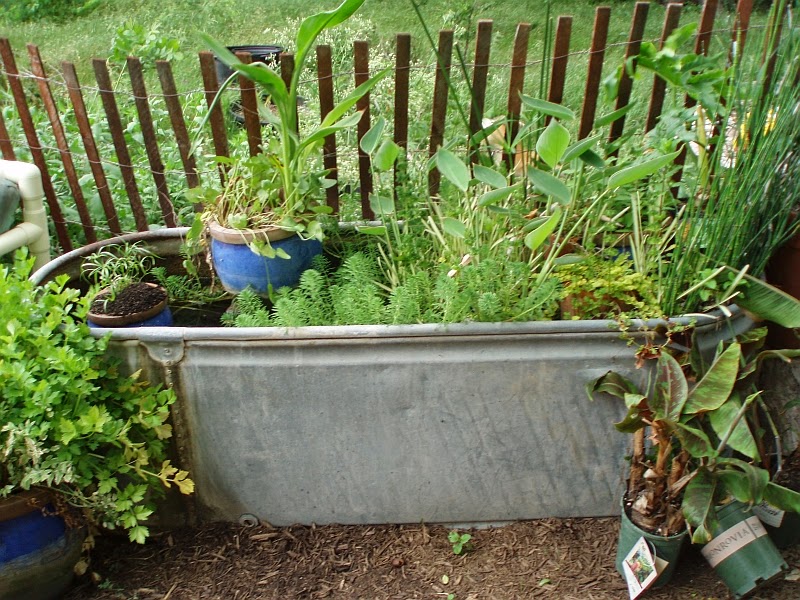