Ever wanted to try canning, but didn't have the equipment?  Contrary to popular belief, most people have almost all the equipment in their kitchens already. 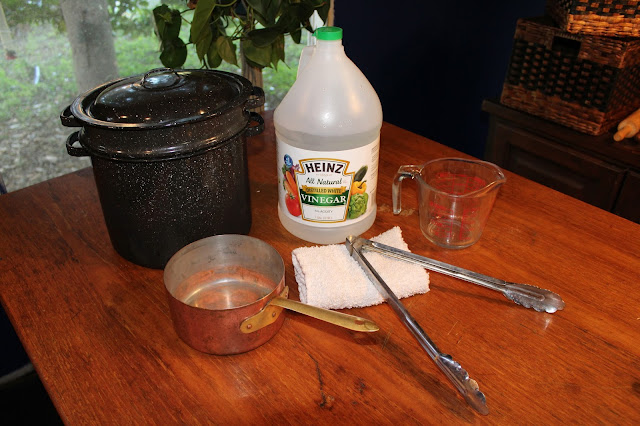 The only thing different about this that everyone may not have is the big pot - it's a pasta pot, with a colander insert. 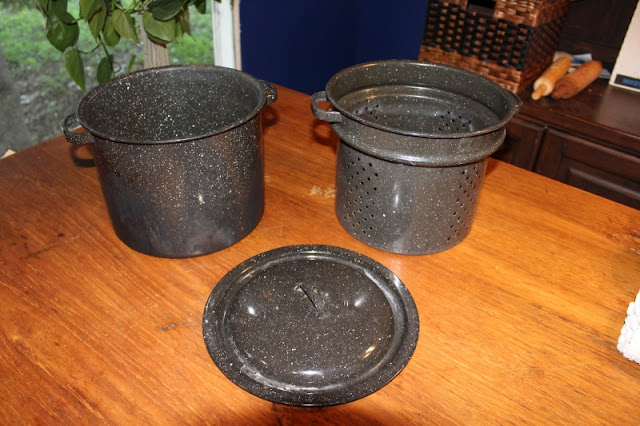 If you don't have one, you can use any big pot as tall as your jars plus an inch and a half, and a collapsible vegetable steamer.  All you need is to keep the jars up off the bottom of the pot so water can circulate below them.  It doesn't have to be too far - half an inch will do.  And it needs to be tall enough so water covers your jars by a good bit - an inch is good - while boiling.  But if you can find a pasta pot, get one.  It's SO MUCH EASIER to do this with one.  Mainly because you can lower the jars into the boiling water with the insert instead of doing it one-by-one with tongs.

The only thing you need to buy are canning jars.  Canning is having a bit of a resurgence lately, so most grocery stores carry them.  I like to use half pint and quarter pint jars since I live alone, but full pint jars will work nicely as well.  They're as big as a can of green beans you buy from the store - a pint is 16 oz. and most canned goods are 15oz. (The RoTel in the photo is 10oz. I didn't have a can of green beans.) - so if those do well for you in feeding your family, so will canned things in pint jars.

While you're getting the jars, take a look at the canning tools.  Ball sells a kit that's only about fifteen bucks and has canning tongs (MUCH better than regular ones), a bubbler stick, a magnetic lid "getter", and a canning jar funnel to make it easier to pour stuff in the jars.

Next, you need a recipe, a tested one.  Canning can easily be dangerous, especially water bath canning if the acidity of whatever you're canning isn't 4.6 acidity or more acidic.  Botulism survives boiling temps and grows in anything less acidic that 4.6pH.  It's odorless, flavorless, and invisible, so don't risk it - use a tested recipe and follow it.

Here's the one I use, from Ball Canning's website FreshPreserving.com, though if I have only a few peppers to do, I halve it (3 cups vinegar, 1 cup water, half as many peppers, SAME GARLIC! Bwahahahaha!).

(Note: When cutting or seeding hot peppers, wear rubber gloves to prevent hands from being burned.)
~*~
(Note from Linda: When it says wear gloves, wear gloves.  Or you will find out exactly how often you rub your eyes, pick your nose, or touch your bits.)
~*~

Assemble your stuff.  I have my Ball Blue Book out even though I don't use it often.  You don't need to buy one - all the info is on the FreshPreserving.com website - but it IS handy, especially if, like me, you do a lot of your productivity stuff when the internet's out. 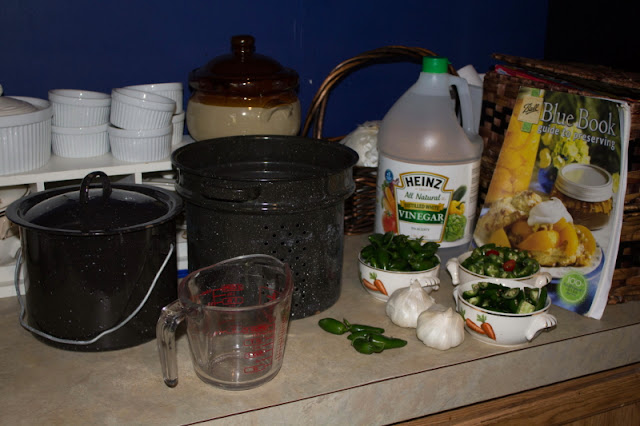 Heat your jars, lids, and rings to sterilize them.  To keep lime deposits off your jars, throw in a cup of vinegar.  It's not essential, so if you forget it, don't worry, but since it's right there on the counter and the jars look so much better without a white cloud on them.  Do this in your canning pot to preheat the water for the canning later. 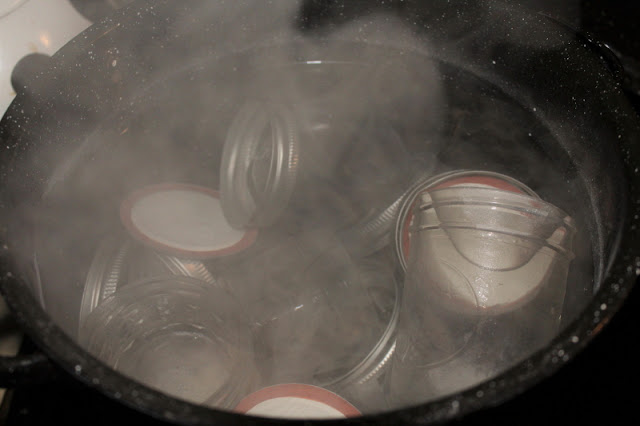 Make your brine.  This is just vinegar and water and garlic.  Turn it on high and bring it to a boil. 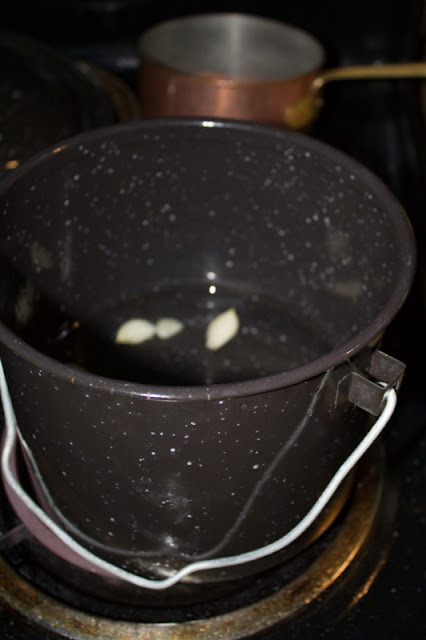 While the brine's heating up, remove your jars to a clean towel.  BE CAREFUL!  If you're not paying attention, some of the water will run down your tongs and burn the shit out of you (just like it did to me right before I took the photo below - yeah, I'm an idiot.).  Don't pour the boiling water out of the big pot.  You're going to need that later. 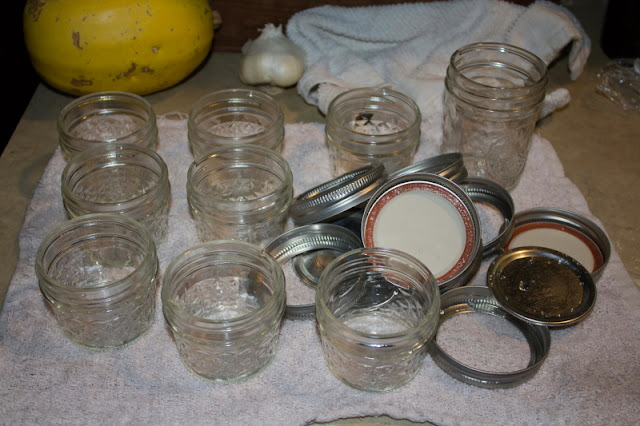 Pack your jars with peppers.  I did some sliced, some halved, and some whole.  I like sliced ones with a steak, halved ones on sandwiches, and whole ones when eating tacos.  (I am NOT a foodie! Just spoiled.) 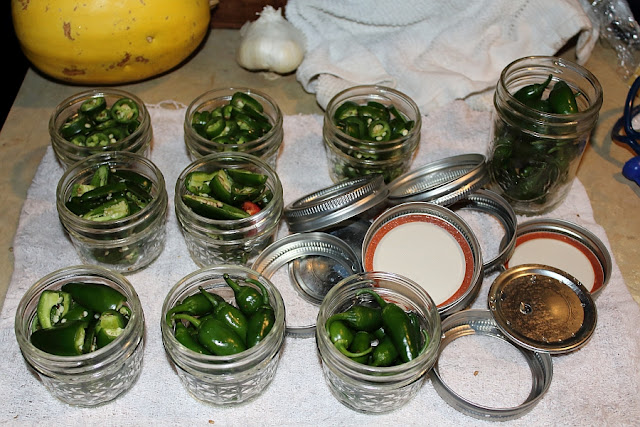 Your brine should be boiling by now.  Ladle or pour it into the jars but NOT to the top!  Stop half an inch down.  There's a thick ridge on the outside of the jars just below the threads for the lids.  That's half an inch down from the top, so just fill to that ridge line.  Your peppers will float, but not to worry - they'll eventually sink.  Why leave that space?  It's called "headspace" in canning parlance.  When you boil your jars, the contents will expand, and that space keeps it from expanding so much that it flows out of the jars, contaminating the rims and possibly making a pepper seed or somesuch get in the way of a good seal forming.

Remove air bubbles.  Use a butter knife or that bubbler stick the came in your tool kit to push the peppers around a bit to let the air bubbles escape.  Since I'm doing quarter pint jars, there really aren't that many air bubbles that get trapped, but if I were doing larger jars or more "sticky" stuff like peach preserves, big pockets of air can get trapped halfway down the jar and that takes up space that could be taken up by food. 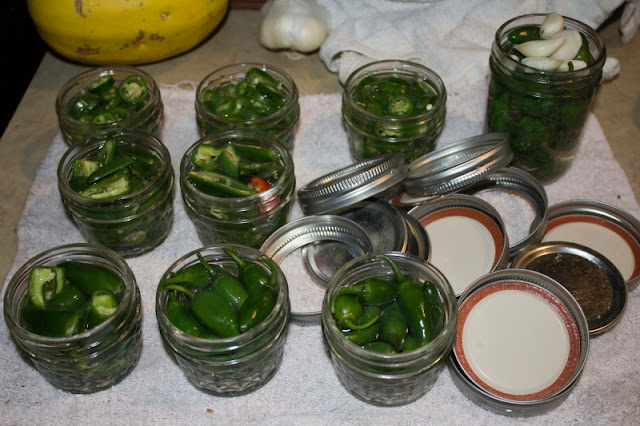 Wipe the rims with a clean towel and put the lids and rings on BUT ONLY FINGER TIGHT.  Remember how the stuff in the jars expands?  It forces air out and you have to leave the lids just loose enough for that to happen without exploding the jars, but tight enough that the water in the boiling pot doesn't get in. 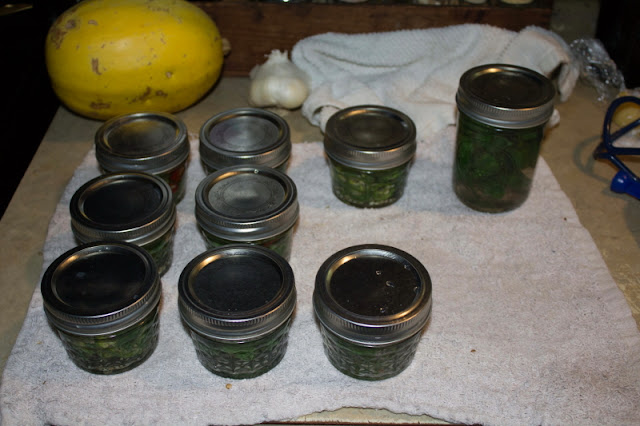 Load the jars in your pasta pot insert.  This is why a pasta pot with an insert is so handy for this.  If you don't have an insert, you have to lower them down into the pot of boiling water, one by one, carefully.  CAREFULLY.  I don't know about you, but I know about me, and I'd screw that one up in grand fashion.  So I'm glad I have a pasta pot. 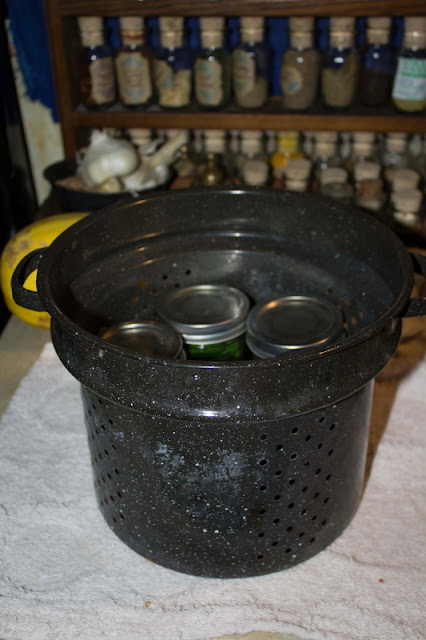 Remember that boiling water from sterilizing your jars in the beginning?  That's the same water we're going to water bath can with now.  Handy, huh?  BUT, and THIS IS IMPORTANT - I pour out most of the water before I lower the pasta pot insert into it OR IT WILL OVERFLOW.  I don't pour it down the sink because I'll put most of it back in in a minute.  I just pour it in the brine pot to hold it since that pot's empty now. 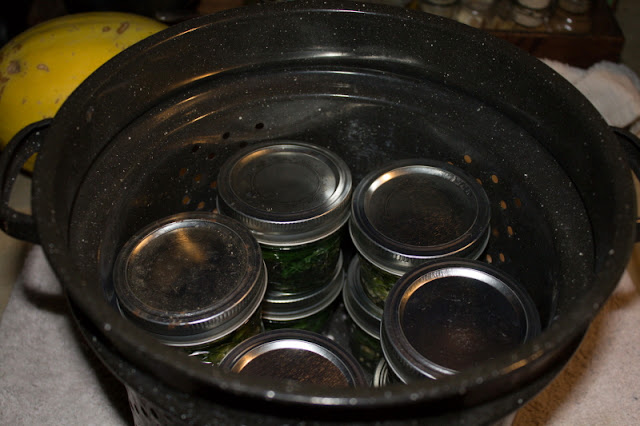 Carefully lower the jars into what's left of the boiling water, pour in the reserved boiling water in the brine pot 'til it covers the jars by one inch, or as close to an inch as you can get. 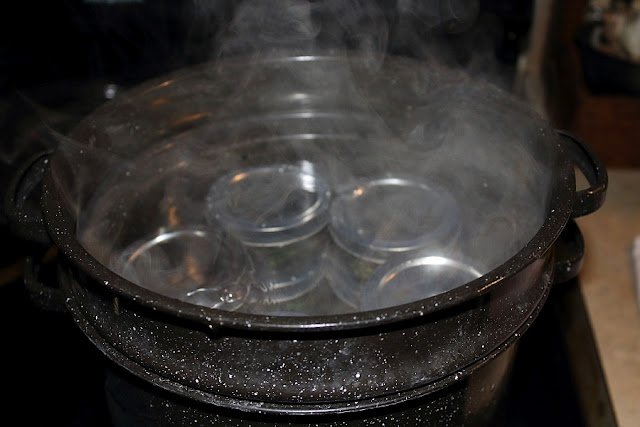 Put the lid on and bring it back to a rolling boil. 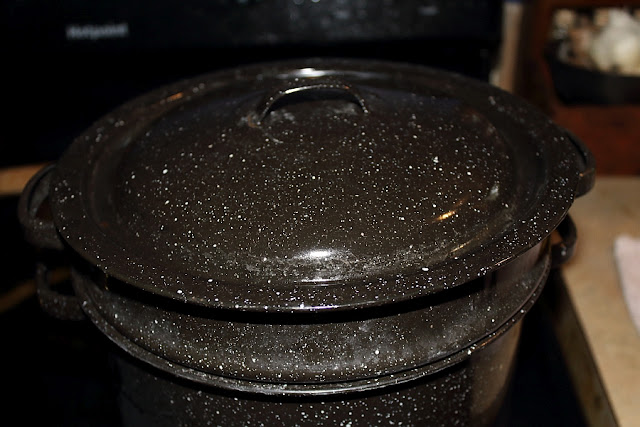 After it reaches a full rolling boil, set your timer for ten minutes. 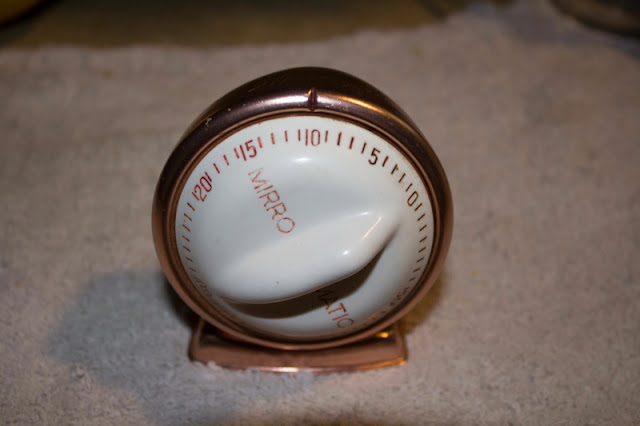 DING!  Take your jars out of the pot, set them on a kitchen towel, and tighten them the rest of the way.  Use a kitchen towel or hot pad to handle them 'cause they're hot! 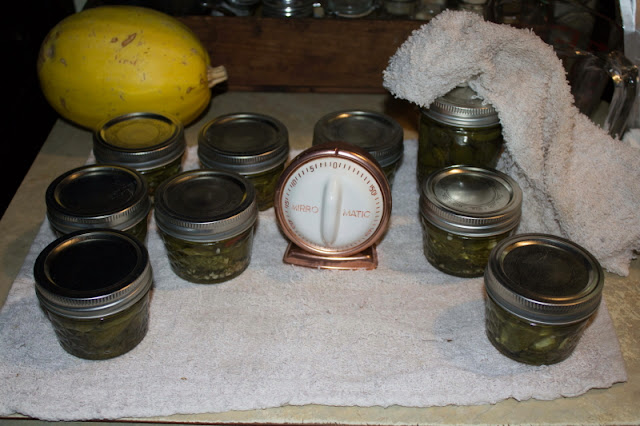 And listen to the satisfying "PING!" of all the seals setting!  The next day, make sure the little "bubble" or "reverse dent" in the top of each lid is now a DENT.  If any of them are still up and not down, refrigerate those and eat them first. 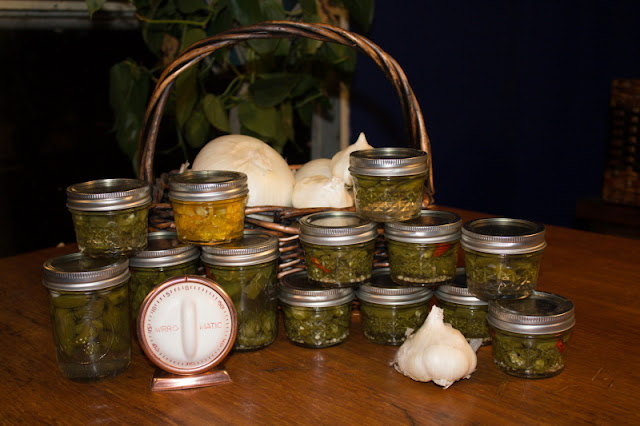 I did 8 quarter-pints and 1 half-pint last night since that's about as much as my pasta pot will hold.  The rest of the jars are the ones I did in class, including one of orange habaneros.

This may be a banner year for pickled peppers.  Roger said he's going to leave the peppers in the garden at work 'til frost, so I hope to get more of them - more jalapenos, more habaneros, and maybe even some little spicy bells and Tabascos.  The Tabasco plants are absolutely covered with peppers, so I may even try to find a good tested recipe for Tabasco sauce!  Wouldn't that be awesome?  Why yes, yes it would.  Almost as awesome as the Ghost peppers Casie's giving me. ...  I'd better get the ice cream maker oiled up and ready...