George and I planted 450 onion sets (nine bunches) some months ago.  I can't remember exactly when, but it must have been late January or early February.  Later, George said doing this was giving him street cred at work.  "What'd you do this past weekend, George?" coworkers would ask.  "Planted 450 onions," he'd answer, getting many "Wow!"s in response.  He seemed to like that.

I think watching them grow drew him in to gardening a bit more, too.  When they started bulbing up, I pointed them out and he noticed one in particular that was rather large, rushing over to it and exclaiming in excitement about it, his voice going up in pitch at the end like all of us gardeners' do.  Yep, he's bitten the line.  Once we harvest the potatoes, I think the hook will be set.


We harvested them today.  It looks so nice, all those onions hanging on the fence!
The red ones are Southern Belle Red and they did quite well.  The others that did the best were the Yellow Granex.  Those are the two most prevalent in the picture.  We planted three bunches of each of those, and one each of White Bermuda, 1015Y and Contessa.

The Contessas didn't do so well.  There was an estimated fifty sets in each bunch, so I think the 1015Ys outdid these.  They just kind of seemed to limp along in the growing.  But apparently they bulbed up okay.  We'll still give them another try since they may not have gotten a good start because we planted them on the ends of the row.  Maybe the ground was harder there?

Lastly and leastly, the White Bermudas.  These didn't do well at all as you can see from the picture.  But again, part of that may have been our fault, planting them at the front end of the row where the ground was definitely harder than in the middle or even the far end.

Overall, I think we'll try them all again next year.  But they we need to plant them all earlier, as soon as the sets come in at work.  Or maybe I'll try growing my own sets, planting the seeds in October.  I've been reading up on them and I've learned that they grow leaves for a while then stop when daylength triggers bulb production, then each leaf translates to a ring in the bulb, putting it's energy into it.  So if we get them in earlier and fertilize the heck out of them then, we should get bigger bulbs.

We'll also plant all of them in loose soil to give them all an equal chance.  I'd hate to lose out on a fabulous variety just because I gave up on them after one bad showing that could have been my fault.  I'm already looking forward to next year. ;)
No comments:

A Pine Tree Blew Up in the Garden 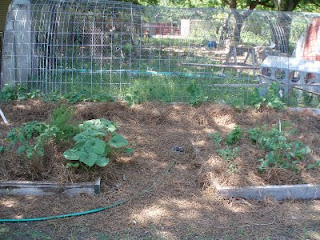 I just finished mulching using pine straw. Man, what a chore! Mostly because I had to weed before I put it down. But now that it’s (almost) done, I feel SO much better! I’ve got the water running right now to soak everything down and I’ll bet I won’t have to water again for a week now. I was almost up to twice a week before this. Some things needed it twice and the rest were looking like they would like that as well. 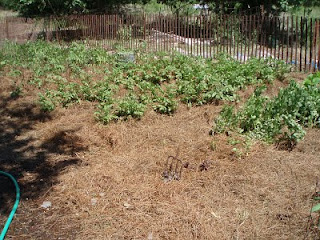 I ran out of pine straw before I could completely finish, but there’s only a couple rows that didn’t get covered completely.  Some beans and the first row of tomatoes ~ I need to pull the rest of the onions before I do that one. Hopefully, I’ll get more mulch soon and get the whole thing done next week.

Man, I'm proud of myself!  Looking forward to not having to weed and water as much. 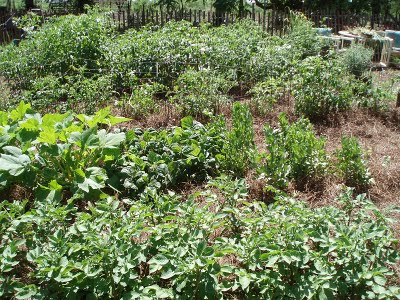 Garden Update: See How It Grows