Things to plant again (and again and again)

Valencia Orange Tomato.  Oh, man, is it good!  It's gorgeous bright orange colored skin (honestly like a Valencia orange) is almost blemish free.  The shape is typical tomato ~ fat, round and slightly flattened.  It's meaty with few seeds and the core is almost non-existent.  But the flavor is the best part ~ fruity-sweet and deep, probably from a hint of acidity, but only a hint.  It's just a beautiful tomato.  The plant's not that productive (I think it set a half dozen before the heat set in the first time, we'll see if it set any more this last cool down.), but it's one I'll be saving seeds from for dang sure. 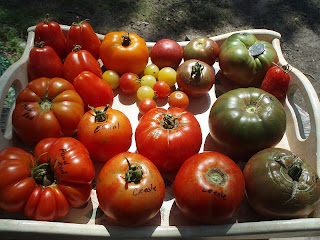 Another hit this year is Snow White.  These little pale yellow beauties are nommy!  Smaller than a quarter (bite sized!) and perfectly round.  This one's also fruity sweet, but no acidity I could tell.  It's sweeter than the Valencia.  The plant is pretty darn productive, too. I think these would look beautiful in a bowl with some Yellow Pears, Sungolds, Juliets, and a few Matt's Wild Cherries thrown in for sheer cuteness.

As usual the Romas are kicking ass.  They're so freaking productive it's incredible.  The San Marzanos are holding their own, but it's not a candle to the Romas.

Some winter things are hanging in there, too.  The Red Russian kale has finally bit the dust.  A couple weeks ago it started bolting, then the insects set in.  I think I'll wait to pull it 'til it's obvious it's a goner, so it's still out there in all it's lacey-leaved glory.  It looks like it's trying to put some more leaf rosettes out down near the bottom.  We'll see.

The chard is still there, too.  The Fordhook Giant is beautiful.  Tall, white and hardly a bug bite on them.  They do look like they're suffering in the heat a bit, all wilty and such about midday.  But it's hanging in there.  The colored chards I can't say the same for.  They look as bad as the kale.

The collards are still doing okay, too.  As is the dill and a few forgotten beets.  The leeks are plumping up.  I wonder if I should pull a few to eat now or wait for a freeze to sweeten them up.  I have the same conundrum about the greens. 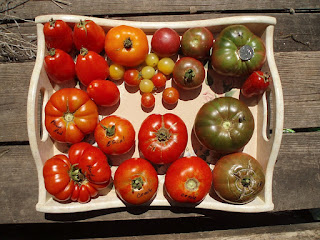 And the ubiquitous tomato picture(s).  Starting from the top left ~ five little Romas.  The bright orange one to the right of them is the Valencia Orange.  At it's feet are the Snow Whites and Isis Candy Cherries.  To the right of them are three little Black Brandywines (very productive, but not as nommy as the other purples) and a big Black Giant with a quarter on it's head to show size.  Below that are a little San Marzano, then a Black Krim and a Cherokee Purple.  To the left of that and against the front rim of the tray are two Creoles.  Behind them is a Dinner Plate.  To the left of it is an Early Girl.  To the left (lower left and upper left both) are two big, fat Ponderosa Reds.  And we're back to the Romas.

I need to have a taste test, but at the moment I'm too full of flax bread.