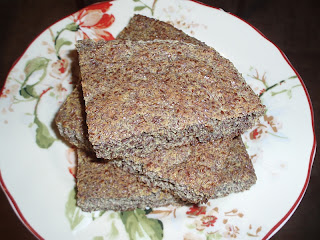 I don't know if I've mentioned it before, but a couple years ago I lost a hundred pounds by switching to a low carb (low crap, really) diet.  I like sweets and all, but two of my very favorite things in the whole wide WORLD, and two things that are quite high in carbs, are pasta and bread.

Mmmmmmmm, pasta.  Linguine with a perfect al dente bite smothered in alfredo sauce and studded with shrimp.  Homemade macaroni and cheese made from a real roux with muenster, white cheddar, and mozzarella.  Or just freshly boiled angel hair drizzled in butter and capers.  Oh, gods (because calling on one isn't enough.).

And bread.  Breadbreadbreadbreadbread!  Sourdough, French, garlic, nut, wheat berry, rye...  Toasted in butter on a cast iron griddle.  Baked into croutons, seasoned just right.  Or sandwiches ~ oh, I could go on all night.  And the smell ... oo-oooh, that smell ... of it baking in your own oven.  THAT I could even make a meal of all on it's own.  Just give me a freshly baked loaf and a stick of butter.  Gimme, gimme, gimme.  Oh, bread, how I've missed you. 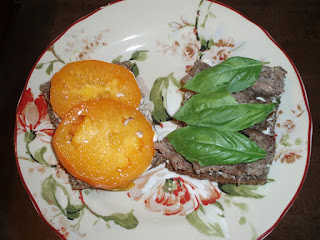 But the longing may have ended.  I just tried Laura Dolson's Focaccia Style Flax Bread and ... well, the title of this post says it all.  Oh. EM. GEE.  It's good.  So good that I'm going to copy the recipe to a card in my recipe box, the hard drive of my computer, and the bottom of this post just so I don't ever, ever, ever, ever, ever lose it.

It tastes just like a whole-wheat nut bread.   It's lightly nutty and sweet, but not overwhelming at all.  It's the perfect accompaniment to the baked sausage, mayo (Hellmann's of course), basil leaves and Valencia Orange tomato I topped it with.  It's consistency is soft, just like bread.  It's not at all like dry heavy pumpernickel or tough tortillas or even cake, all of which I've encountered in my trials of other low-carb breads.  (For the record, I like cake.  Who doesn't like cake?  Of course I like cake.  Just not in my bread.)

When I was making it, I noticed it called for a couple tablespoons of fake sweetener.  I'm not a big fan of fake sweeteners, so I used agave nectar instead, which has a low glycemic index and load so it won't affect me nearly as badly.  It does add 32 grams of carbs to the whole thing, but that just means the bread's got 3 1/3 grams effective carbs per piece.  Not bad.  The recipe makes 12 pieces, each with 6 grams protein, 185 calories and 5 grams fiber (looks like I'll be poopin' good, too).

Oh, I am in love.  Now I just need a noodle recipe. 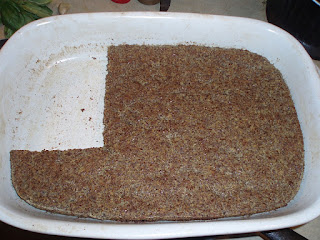 2 cups flax seed meal
1 Tbsp. baking powder
1 tsp. salt
2 Tbsps. agave nectar
5 beaten eggs
1/2 cup water
1/3 cup oil (I forgot to put this in and it was STILL good)
Preheat oven to 350 F. Oil pan (a 10X15 pan with sides works best) with melted butter.
Mix dry ingredients well -- a whisk works well.  Add wet to dry, and combine well. Make sure there aren't obvious strings of egg white hanging out in the batter.
Let batter set for 2 to 3 minutes to thicken up some (leave it too long and it gets past the point where it's easy to spread.) Pour batter onto pan. Because it's going to tend to mound in the middle, you'll get a more even thickness if you spread it away from the center somewhat, in roughly a rectangle an inch or two from the sides of the pan (you can go all the way to the edge, but it will be thinner).
Bake for about 20 minutes, until it springs back when you touch the top and/or is visibly browning even more than flax already is.  Cool and cut into whatever size slices you want.

Make a freaking sandwich.  Eat it.  Fall apart in bliss.


Update June 2nd: I tried this recipe with golden flaxseed meal, 1 tablespoon agave nectar and 1/3 cup melted butter instead of the oil.  It tasted cornbreadish.  I think with even less agave nectar and twice as much salt, it'd be even more like cornbread.  Ooh! Ooh!  Green chilis!  Gotta' add those, too.