It's onion planting time!  We got the sets in at work from Dixondale farms the other day, and I've been chomping at the bit to get some planted.  I've had two of the three rows ready and waiting for a couple weeks now, all nice and turned and amended with Minerals Plus, humate, 8-2-4, Flower Power, and oodles of compost.

Nitrogen is a good thing for onions.  The bulb isn't a root structure, but an enlarged part of the leaf, and since each leaf corresponds to a ring of the onion, you want leaves.  LOTS of leaves.  Which means nitrogen and planting early so they have time to make as many leaves as possible before the daylength triggers bulb production.  The other macronutrients are important, too, but nitrogen is key.  And planting early.

We didn't get Contessa this year.  Instead, we got Texas Early White, an open-pollinated variety new to the market this year that's supposed to be disease and bolt resistant and a really good keeper.  The sets looked nice and small and the open pollinated part turned me on, so we planted quite a few of those.  I'm looking forward to seeing how they do.

In case you were wondering why I'm seeming to say that big sets are bad, here's the scoop.  Bulbing onions are biennials, which means they'll bloom in their second year.  Unless you want to save seeds, blooming in bulbing onions is bad.  It takes energy away from bulb production, forms a tough flower stalk that is a pain in the ass to cut out of the middle (and a pain in the ass to pick out of your teeth if you don't), and bloomed onions don't keep as well ~ they tend to rot from the middle out.  So you don't want blooms.

After you plant the sets out they'll be exposed to cold over the next couple months, and when temps warm up, the large ones will think they're two years old and will be more apt to bloom.  Small ones, smaller than a pencil diameter, will be a lot less apt to do that.  It's counter-intuitive to do this, pick the small ones.  One would think that you'd want big ones to get a jump on the growing.  Nope.  Little ones.  Size does matter here.

UPDATE 1-22: The day after I planted them, it rained.  I hurried out after work to look at them and they were all standing straight up in little lines like little soldiers.  Too cute!  And here they are two weeks later. 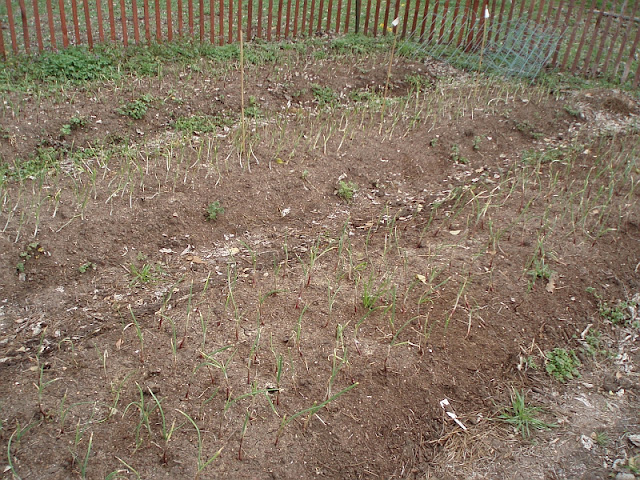 Those are the Southern Belle Reds in the bed in the front.  You can see that they've already started elongating present leaves and putting out new ones.  Exciting!