I knit for the relaxation and indulgence of it.  It's my happy place.  I have a Pavlovian response to it: all I have to do is pick up my project and I calm down.  But when I'd see a cheap piece of crayon-colored plastic hanging off it, it kind of ruined it for me.  Nothing against crayon colors.  I'm just more of a jewel-tone girl.  And am definitely anti-plastic. 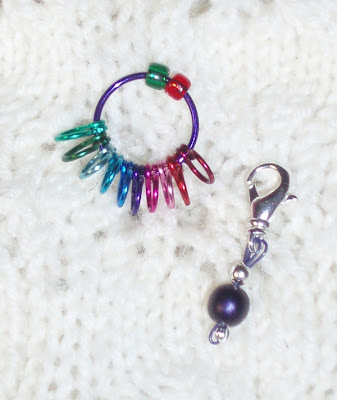 I've decided to splurge on some knitting stuff.  I'm normally loathe to spend much on anything non-essential, but I thought I'd treat myself.  It's a mental-health expense.  (That's my story and I'm sticking to it.)  And I'm worth it (*she says as she throws her hair around like the commercial lady in the '70s*).

So I got on Etsy in search of the Perfect Pretty Row Counter to go with my soon-to-be-here rainbow-colored double pointed sock needle set and all the squooshy yarn I'm getting (yeah, I'm getting used to this spending thing).  I did a search and found all sorts: abacus bracelets and beaded chains and numbered circles and things I couldn't figure out how to use.   But none of them seemed quite right.  The bracelets were beautiful, but I know me: if it wasn't right in the way of my knitting as I passed the end of the row, I would forget to add one.  The beaded chains were equally as beautiful, but loooooooong: too big for sock knitting and probably likely to get caught in lace.  The numbered circles were adorable, but the black numbers on white backgrounds reminded me of the cheap plastic things I was trying to get away from: far, far away. 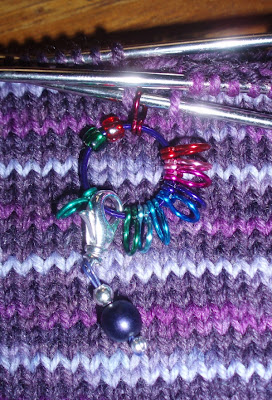 Then I found this.  A tiny little, rainbow colored row counter.  No numbers, no plastic, no crayons, and PRETTY!  I got all excited, thinking of how good it would look hanging from my sock-in-progress, all colorful and functional and tiny and PRETTY!

Then I noticed ... it only counts to ten.  Bummer.

But I didn't want to give up on my Almost Perfect Pretty Row Counter.  I got to thinking ... if there were only something to clip between the units rings to denote tens.  Oooooh, they have other pretty beads they use in other pretty things.  And there are those clippy-jobbies I would learn later are alligator clips.  That would do it!

I messaged Susan and Todd, who I didn't know were Todd and Susan yet, and commenced the explanation of what I had in mind.  They knew what I wanted even though I didn't know all the right terms for it (clippy-jobbie equals alligator clip), made suggestions to make it better (like substituting this counter since it was smaller and smaller was what I was going for), and due to differences in computer monitors and the like, I had to trust their judgement on color matching/coordination (not hard to do, judging from their other items).  Aaaaaand they nailed it ~ it's tiny, it's functional, and it's pretty.  SO pretty.  I love the purple wire better than I would have loved the silver, and even though the bead they suggested looks almost black in my pictures here, it's actually a beautiful deep purple that goes oh-so-well with the purples in the counter.  Just look how well it goes with the sock I'm working on now.  Serendipity, how I love you.

The whole thing, from my first message to them to having it in my hands, took only two weeks, and one week of that was because I couldn't find the message notification thing on Etsy to know they had answered my original note in less than 24 hours.  Derp.  It was only five days from finalizing what I wanted to having it in my hands, packaged wonderfully in a little metal tin, complete with candy!  Yes, they sent me candy.

Unfortunately, since this was a custom order I couldn't leave a glowing review on Etsy, so I've done it here.  Thank you Susan and thank you Todd for giving me more than my money's worth.  And the candy.