You GOTTA' Grow This: Mouse Melons

OMG! Y'ALL! You NEED to grow these! Seriously!  They go by many names: Cucamelon, Mexican Sour Gherkin, Pepquinos, and my favorite Mouse Melons, but their botanical name is Melothria scabra, so as long as you get those, you're golden.

They're so cute that that alone is reason enough to grow them. 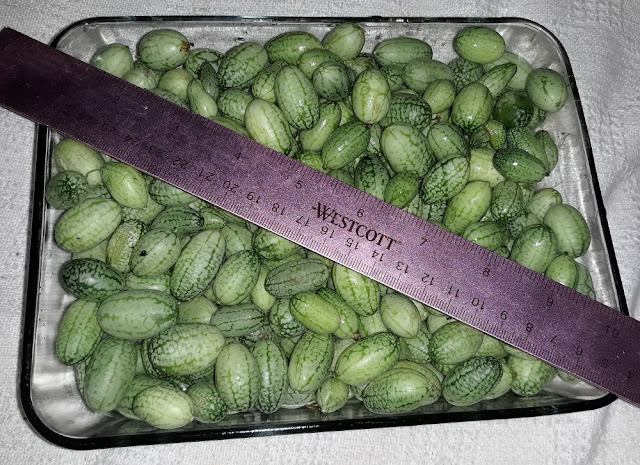 But wait! There's more! They're tasty, too! Tart like pre-dilled cucumbers. Tangy and crispy and yummy. Bite sized even, right off the vine no slicing or dicing needed. I think they'll be great in a salad. Wonder if they'll last long enough for my mesclun that's just sprouting to join them. I'm going to leave a few in the fridge to see if they do, then make some 'frigerator pickles out of a some, then can the rest for later. 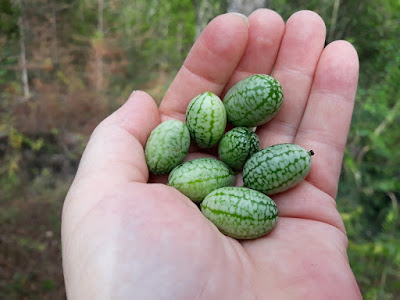 They've been growing out there all year and I didn't think they'd made anything, so never really looked. I did see a few on there a while back, picked a couple, and ate them. They were pretty great, better than regular cukes I thought, so I made a mental note to grow them again next year, starting earlier and paying more attention to them, then thought no more of it.

Last week's frost nipped the vines enough that I could see through them, and lo and behold, there was a shit load of the little buggers on there!  Five little plants that covered a 3' wide by 4' tall trellis made a half gallon or so fruit. Interestingly, they also sent out a couple or three vines across the ground, shooting out singly in different directions.  One was about eight or ten feet out, headed to the squash bed, and made little melons even right on the ground!

I'm impressed with them since it was so hot and dry this year, plus they were in a shadier spot.  Next year they'll get much better accommodations.

Now I'm off to make pickles as the cold front rolls in.  Ahh, bliss... 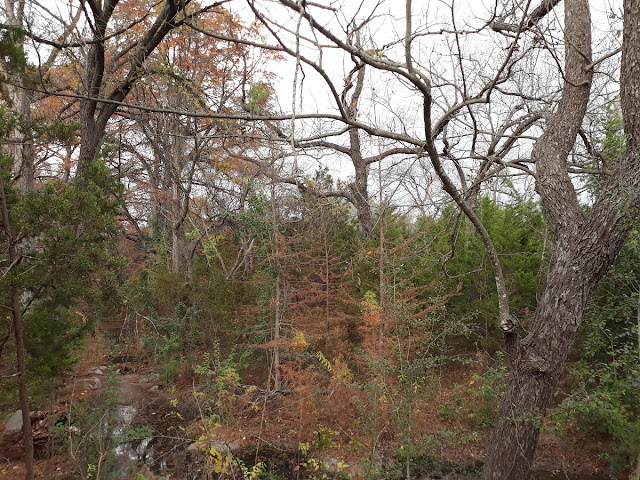 Email ThisBlogThis!Share to TwitterShare to FacebookShare to Pinterest
Labels: Edible Gardening, You GOTTA' Grow This