I'm Too Sexy for my Beesuit

Too sexy for my beesuit, so sexy it huuuuurts. 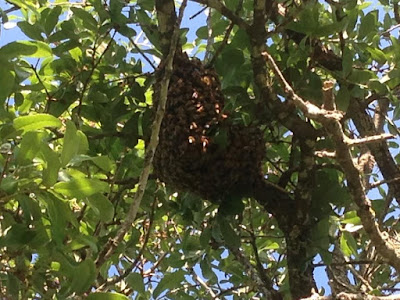 Caught a swarm today.  My first one since I was a kid, catching them with my dad.  And MAN, was it fun!

Saturday, a woman posted in the neighborhood group on TimeSuck.com (Facebook) that she had a swarm in her tree above her garden and they flew after her husband when he was mowing the area where her grandkids play, so did anyone know who would come get it?  Well, sure!

Many of y'all reading know we've been having some hellacious storms since then, so I was hesitant.  She said it was twelve or fifteen feet up off the ground.  The thought of knocking the hell out of a branch full of bees with a four-tined hoe and hoping they fell into the bucket I was holding while standing on a ladder that was standing in a truck IN THE RAIN didn't sound that appealing.  I'm a brave Aries, which really means sometimes I'm too stupid to realize things aren't a good idea.  Luckily this time I wasn't so dumb and thought that didn't sound smart, so we waited.

Swarms are a fascinating thing.  They're honeybee reproduction.  It's so funny that we call it "the birds and the bees" when their reproduction is really nothing like ours.  When a colony of bees grows too big for the home they're in, they start making a bunch of new queens.  When those queens are nearing hatching time, the old queen takes off with a bunch of the population.  When the first queen hatches, sometimes she takes off with a bunch more of the bees and sometimes she does the thing we've usually heard of - either stings the unhatched queens to death or fights them, again to the death.  Then she makes her mating flight (the only time bee reproduction is even close to our reproduction) and comes back to reign supreme in the current home.

Meanwhile, the old queen and her followers (which is funny - she's the follower - it's the colony that decides all this) fly around looking for a new home.  Sometimes it doesn't take long.  Scouts will have been scoping out new digs since before they even left the old place, so many times they'll fly right to it.  But sometimes they run out of time and have to get out of their old home before they've found a new one, so they all light somewhere, cluster around the queen to protect her, and wait, sending out scouts to look around the neighborhood.

Once the scouts have all found prospective accommodations, they come back and each do a waggle dance for the rest of the group.  They're communicating about what they've found so everyone can decide whether they'll like this new place.  Can you imagine?  Wagging their 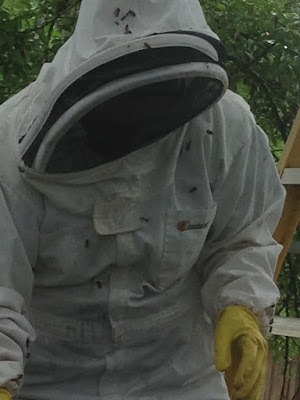 butts seven times to the right and twelve times to the left means "It's a 4K bedroom with a POOL!"  Three times to the left, eight to the right, and two back to the left says "But the one I found is in a great neighborhood two blocks from a supermarket (veggie garden)!"  Those are some talented derriers!  And when one of those derriers convinces the rest that they want that pool more than convenient shopping, they all take off to the new place at once, queen in tow.

While all this is happening they're quite gentle really, and don't at all fit the stereotype.  A swarm is just a ball of bees with a queen in the middle, so she's the only thing they have to protect.  Bees are usually only aggressive when guarding something.  A fat hive full of brood (babies) and honey is really something to protect. That's when they're the meanest.  Just protecting one little queen isn't that big of a deal, so they're quite calm about it all, lots calmer than I am when I'M moving.

Being cold and wet makes them calm, too.  I don't know why.  That usually makes me pissed off.  But I'm not a bee.  So today, after watching the early-morning weather forecast and seeing that the big storm headed our way was going to be gone by noon, I texted Terri and we made a plan.  A little after noon, sure enough, the rain quit and the sky cleared so I gathered my gear and took off for Terri's. 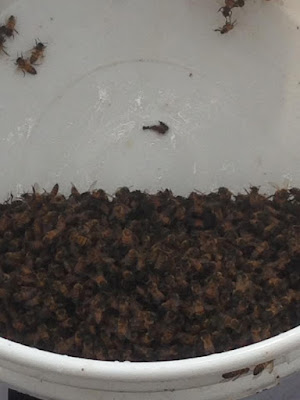 My little truck wasn't quite tall enough, so Terri's husband Melvin backed theirs up under the branch.  But I'm short.  Too short.  He already had a stepladder out, so while I was getting my beesuit on, he was kind enough to put it up in the back of his truck.  He put it in the perfect place and it was actually quite stable!  I was so glad of that.  (He helped me so much that this whole thing was an absolute breeze.  He's also responsible for the lovely photos you're seeing here.  Thanks, Melvin!)

The actual collection story is rather boring really.  Not for me, but for you.  I climbed the ladder, held up the bucket, and knocked the hell out of the branch. The cold wet lump of bees fell straight in the bucket and somewhat on me, and that was that.  I set the bucket down in Melvin's truck bed so all the rest could fly in and went to sit on the porch with Terri to wait.

We had a good visit!  I like her.  It's so nice to meet good people.  Melvin joined us and I got to find out that he's pretty cool, too.  We talked about kids and bees and grandkids and organic gardening.  They told me they didn't want to spray the swarm, that they didn't believe in that, but in helping them instead.  Man, I love living in the country where people are smart enough to not scream "KILLER BEESAAAAHHHHHH!" and grab the Raid.  They had an adorable little veggie garden in the back where the bees were, so that was a good part of what we talked about.  I'd go check on the bees every so often, knocking the branch again because some wanted to cluster back up there where the queen's scent still was, then scoop up more and put them in the bucket.  Then back to talk of gardening. 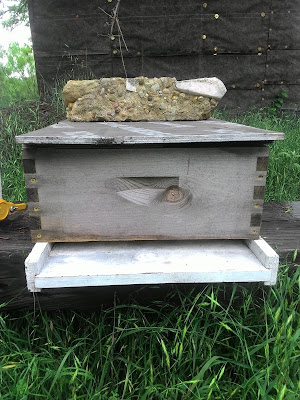 I finally figured I'd gotten the queen for sure when almost all the bees were in the bucket.  I loaded everything up, taped the top on with Melvin's butterfly-covered duct tape, said my thank yous and goodbyes, and off I went, one happy beekeeper.

When I got home, I thought it would be a good idea to give the newbees a frame of eggs and brood just in case the queen was injured in all this - with recently laid eggs, they can make another.  I tore apart the Lilith hive, the one that nailed me last year, and man did that piss them off.  Rain was coming so I didn't have time to light the smoker, plus bees don't fly in the rain so everyone was home.  Yeah.  Big old box full of mean bees.  Oh, joy.  They got angrier and angrier as I opened both boxes and looked through them frame by frame for that perfect one.  They stung me a couple times, but not badly.  I don't blame them really.  Luckily it was on my arthritic wrist.  Bonus!  I couldn't find a frame with eggs I liked, so I just took one full of honey thinking that would make a nice housewarming gift, and closed the mean little bitches back up.

The rest of the story is just me unceremoniously dumping the bucket o' bees into the new hive box with the frame of honey.  I think they liked it.  Even if they don't, they don't have much choice since it's still really stormy and they can't go anywhere.  I hope the forecast for more clouds and rain tomorrow holds true.  The longer they're in that box, the more likely they'll be to stay.  They've been away from a working hive for at least two days now.  Add another one tomorrow and into Wednesday and methinks that's long enough to get them jonesin' for some comb-makin', so they'll just do it.  The drive is strong.  Once they get started on that, they won't want to leave.  I hope.

So thank you, Terri, and thank you, Melvin.  I hope to come down to visit again some day with jars of honey in tow.  Wish me luck!


Next day update:
They're still in there!  I just checked late this morning and saw a bunch of little faces staring at me when I looked into the top entrance with a flashlight.  So far, so good.