The Impulsive Tomato Planting Party - or, I Have Great Friends

Every time I plant large-fruited tomatoes after March 15th, I don't get anything from them.  It's usually just too late by then for the plants to have time to mature and start setting fruit before the heat sets in and shuts them down.

This year, I was busier than normal. ... No, that's not right - I was as busy as I usually am despite trying to cut back. *sigh*  I'm sure y'all can relate.  So when the second week of March rolled around and the tomato beds were still empty, I got a little nervous. 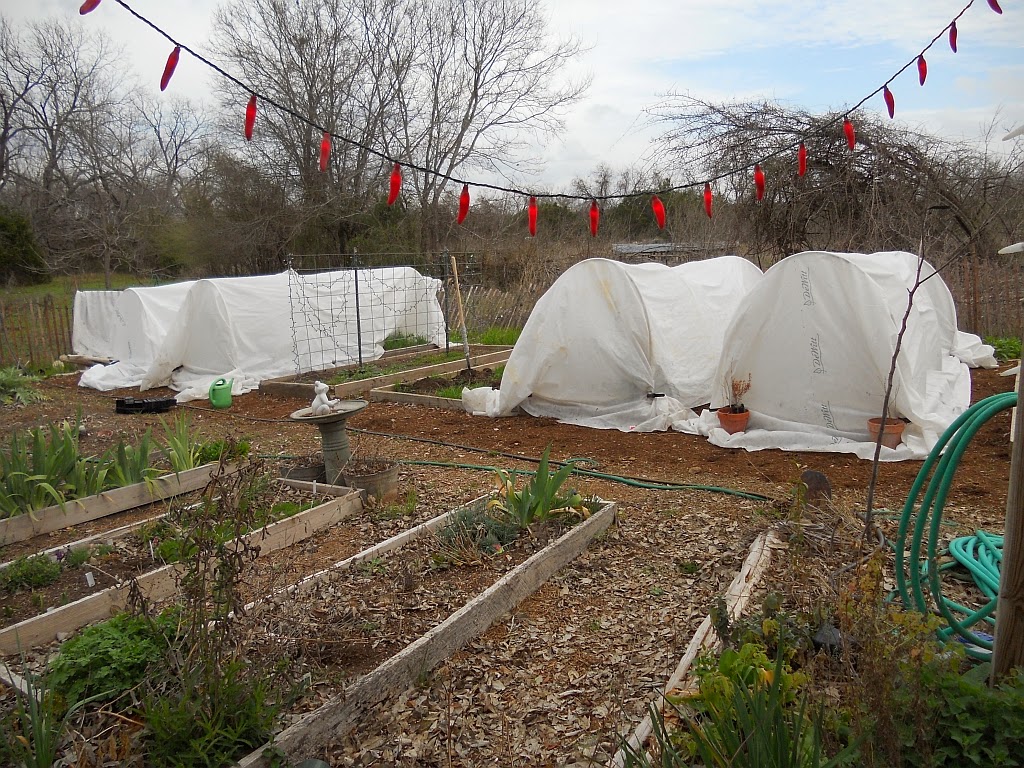 I shouldn't have.  Michael Ford and I had planned to get the plants in the ground after work on the 14th.  That evening he called and said, "Planting party tonight, hosted at your house! Heather and I are on our way!"

My first thought, bolstered by my social anxiety (yes, I have it - you can laugh at Loudmouthed Me now): "Oh, crap!"  My second thought, coming quickly on the heels of the first: "Well, you've wanted to get to know Heather better. Here's your chance."

I got excited about the prospect of fun in the garden - doing something you love with a friend who loves it as much, and getting to know a new friend better who apparently loves doing this same thing or she wouldn't be daft enough to agree to drive an hour to stay up late planting tomatoes in the dark.

Oh, crap!  It was getting dark!  I already had some Christmas lights out there and a full moon was expected that night, but I knew we needed MOAR LIGHT.  I ran around looking for the extra Christmas lights (My third thought: "Now where did I put those extra Christmas lights?!"), found them, grabbed them, and headed to the garden in the dying daylight where I strung them up along the beds we were going to plant. 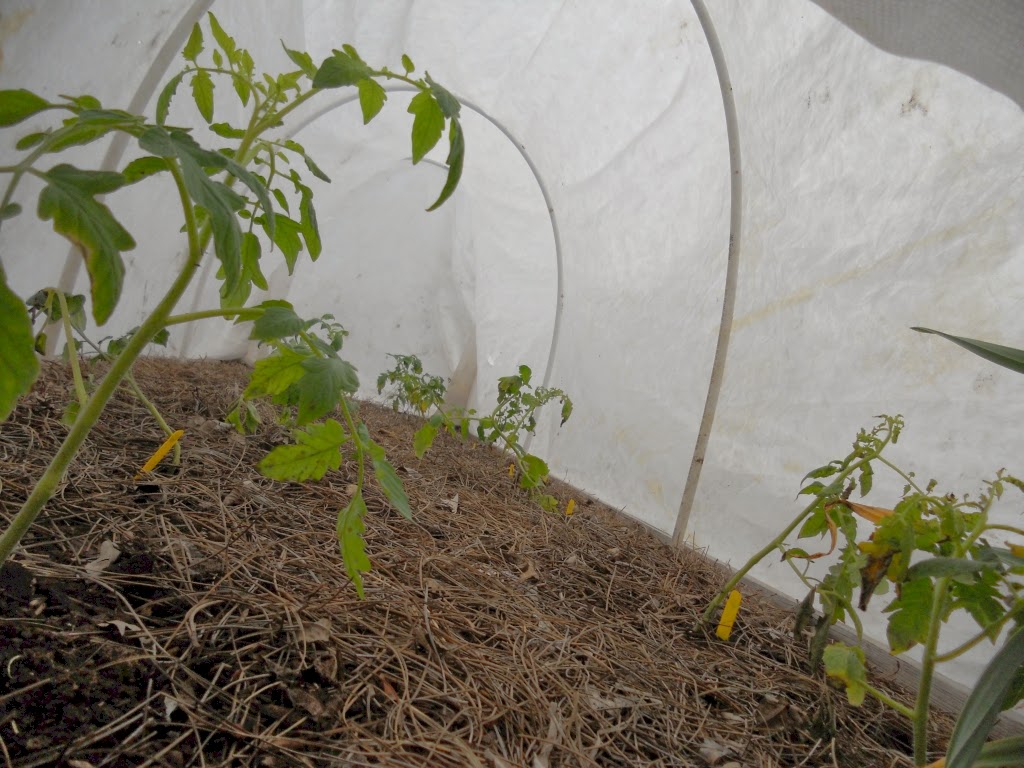 They arrived shortly after with a six pack, a bottle of wine, and a fifth flat of tomatoes.  I LOVE friends like that!

We grabbed the beer, the wine, the bottle of bourbon, the five flats of tomatoes, and headed to the garden.  Michael had already put compost on the beds a couple weeks before.  I had the row-cover frames in some beds already set up, and rebar and pipe for the others was at hand.  All that was left was the fun part.

Michael laid out the plants while Heather and I started planting.  I wanted the cherries at the northeast end, the large-fruited ones next, and the Romas furthest south.  This way, in July when I cut the large-fruited ones back but leave the still-producing cherries standing, the cherries won't shade out the cut ones while they're resprouting.  Determinate canning tomatoes like Romas usually are done for when they finish that main flush of fruit.  With them grouped together, I can pull them out and have a large area to replant instead of holes here and there in the whole patch - plus, they're at the southern end so whatever I replant that area with won't be shaded out by the still-standing tomatoes that are left.  Grouping them this way also makes for easier picking later - I can easily get all the canners in one basket, the slicers in a second, and the cherries in still another, with no sorting needed later. 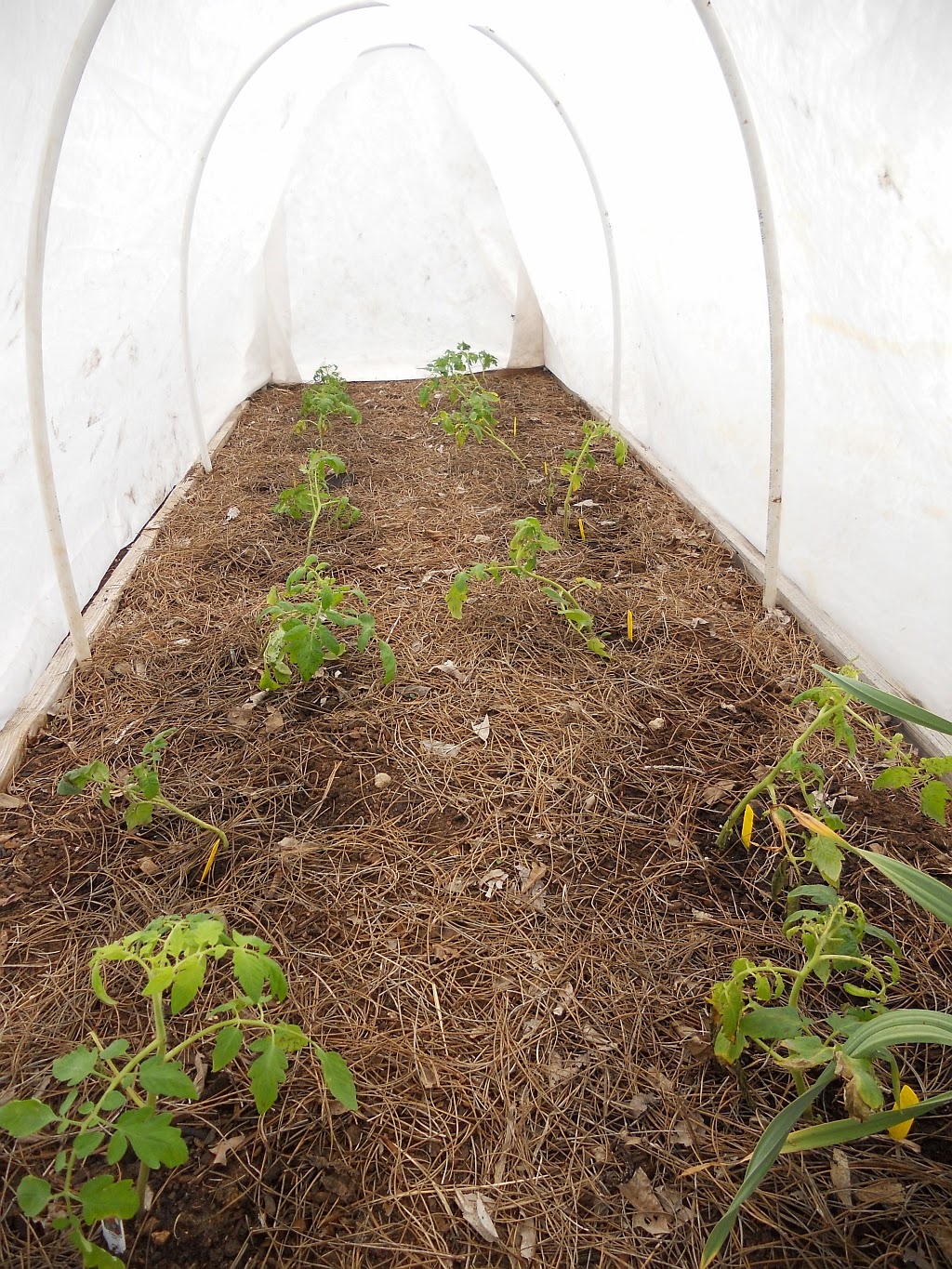 I had only planned on a couple-or-three beds for tomatoes.  You know how that goes...  we filled those up quickly and realized there were many cultivars left that didn't get represented.  I looked up at the other beds, picked one out, and we filled that one, too.  It was then I realized just how many tomatoes five flats are.

I looked at the flat Michael was holding, looked at the beds that were left, thought about what else I wanted to grow that year, and tried to do the math to figure out if I would have enough room for it all.  Math + Bourbon = injuries from the mental gymnastics.  However, Bourbon + Tomato Planting = GO FOR BROKE!

It was such a nice feeling sitting with my friends, sharing the dinner I'd hastily thrown into the oven earlier, enjoying the satisfaction of what we'd just accomplished, knowing the tomatoes were warm all tucked in under the row covers, us all warm inside, too.  I don't know what made me feel the most warm: the electric fireplace or the bourbon.  Ah - it was the friendship.  Yep, that was it.