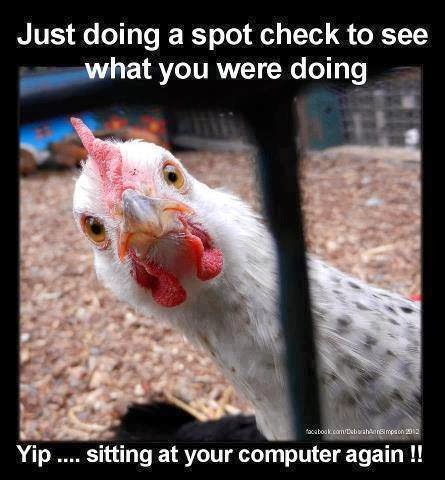 This is the speaking note outline for my class on keeping backyard chickens.  I'll likely flesh it out more in the future.


What kinds of chickens would be good for you - some characteristics of some breeds
Silkies (and other banties) are the ultimate pets and are good mothers, but don’t produce large eggs
Rhode Island Reds and Sex Links - production layers
Buff Orpingtons - friendly, good layers
Cochins - friendly
Cuckoo Marans - dark chocolate colored eggs
Ameraucanas - “Easter Eggers” - to get kids to eat eggs when they don’t like them
Heritage Breeds - you might consider them since demand helps breeders keep breeding them, thus preserving them - LivestockConservancy.org
Roosters - not needed for egg production, some can be mean, most are loud 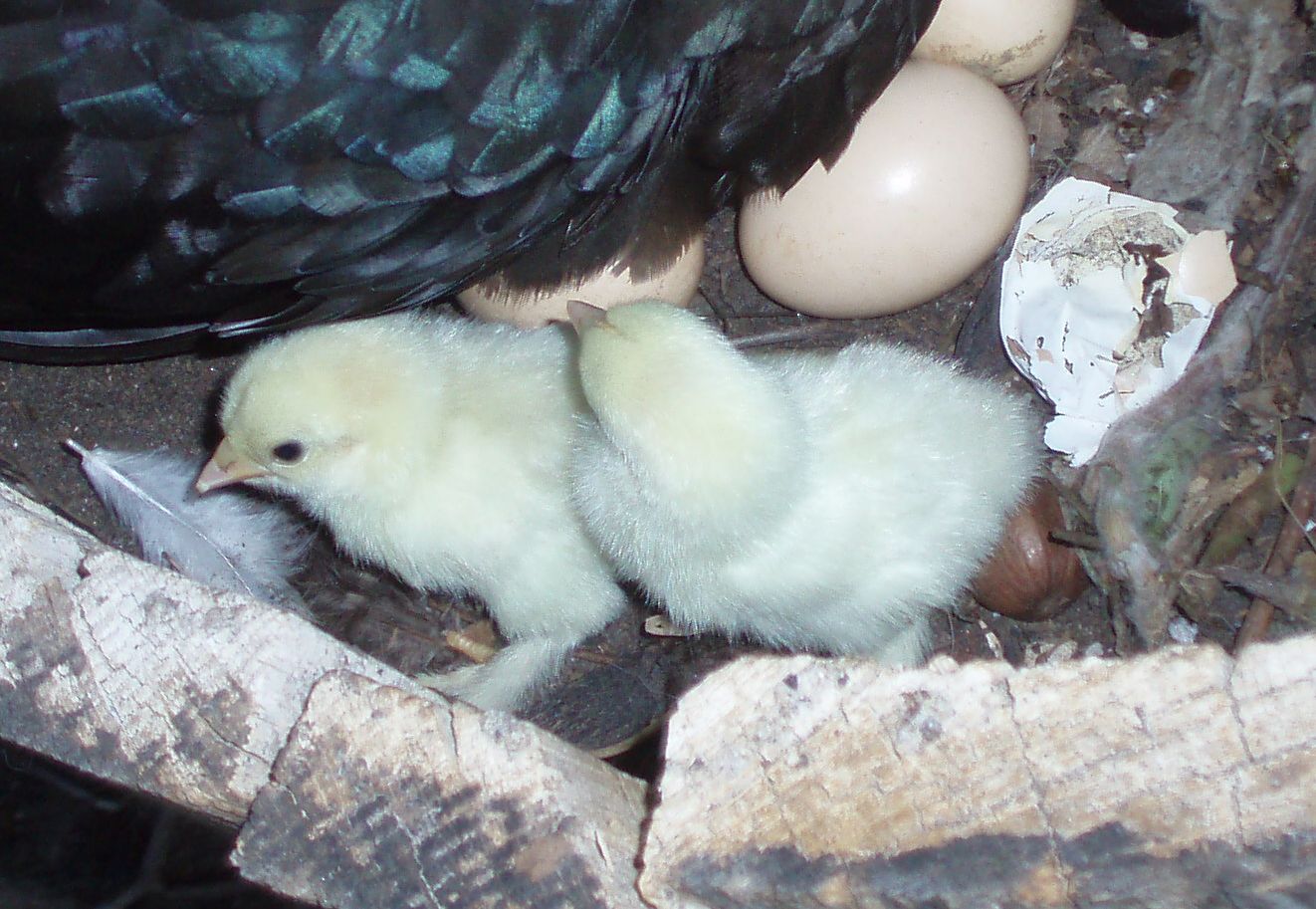 What chickens need - Basic housing and feeding
Have everything set up ahead of time, and ensure it’s all working
STRONG coop and run - BackYardChickens.com page on coops - also consider Chicken tractors (portable chicken coops) 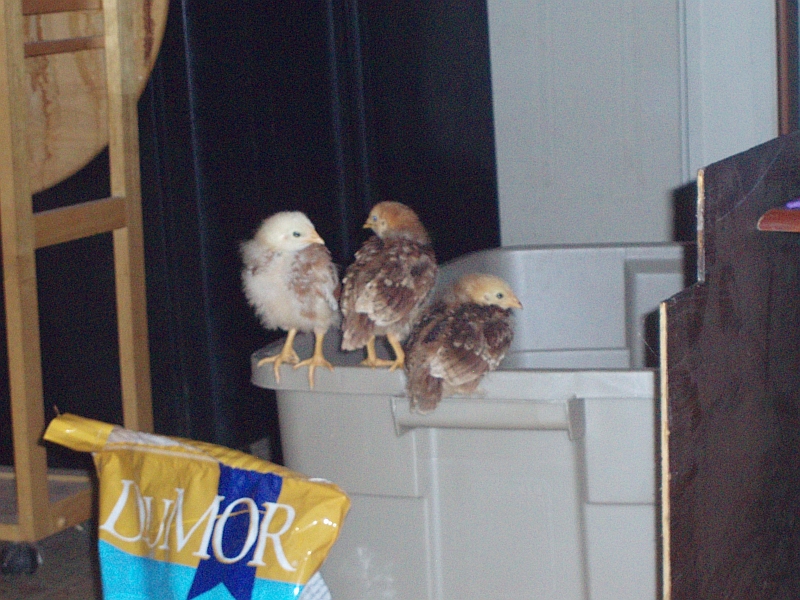 How to brood
Have everything ready beforehand, ensuring it’s all working - read, read, read also to learn, learn, learn
1. 90-95 degrees at chick height, decreasing 5 degrees every week
2. draft free
3. rubbermaid tub is good
4. no newspaper to avoid spraddle-leg - paper towels the first few days/week, rice hulls, fine coir fiber, corn cob chips
5. keep it clean - DEFINITELY
6. light for heat - 100 watt INCANDESCENT - foot and a half above the floor at one end
7. feeders - most anything shallow - marbles in water
8. feed - chick starter crumbles - non-medicated if you vaccinated - FRESH
9. about two months ‘til they’re fully feathered and can go outside full time, 4 to 5 months to laying age though varies with breed
10. WHEN to get chicks - March is good, because it’ll be warm two months later
11. Integrating into the flock - I usually don't have problems doing it at night all at once, once they're fully feathered out, but do watch them CLOSELY the next day. If problems arise, I separate them in a cage, but keep them inside the coop.

Problems you may encounter
NOTE: If using any type of medication, be sure to read the package to find out about how long, if at all, you have to avoid eating the eggs, and if you have to retreat.
Predators - build a strong coop and run, with wire flat out on the ground a foot all the way around
Picking each other - “Pecking order” - usually caused by too confined a space, nutrient deficiency, or boredom
Coccidiosis - chicken looks depressed, isn’t eating, possibly blood in feces - time to call the vet
Mites (body) - tiny little beasties on chicken's body - keep DE in coop, liberally spread everywhere at all times, especially in their dusting spots - use ivermectrin wormer if you have to
Mites (leg) - scaly leg mites - tiny little beasties that burrow into the legs making them look scaly - keep DE in coop, cover their legs with Vaseline, repeat every few days for a couple weeks
Lice - you'll notice nits on the base of feathers - DE, then pyrethrin based insecticide if needed (repeat spraying in ten days to kill newly hatched eggs)
Intestinal parasites - DE in their food, worm with ivermectrin wormer if you have to
“Leather eggs” - give them calcium
Finding a vet - You likely won’t, so bone up on common diseases beforehand
Egg bound - massaging the abdomen may help, but sometimes nothing will 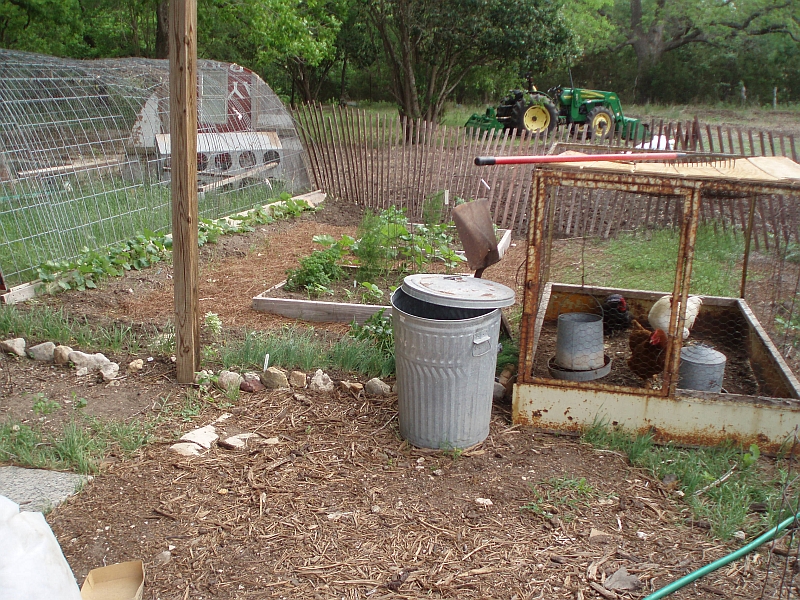 Other weird things, but not really problems:
“Fart eggs” - small, undeveloped eggs usually laid by young hens
Molting - usually late summer, early fall - lasts a few months
Winter pause of laying - give them light to help keep them laying
Broodiness - let her do it because you can’t stop it - maybe substitute other kinds of eggs, or plastic Easter eggs that you later substitute for chicks (slip them in at night) or don’t substitute if you don’t want to deal with chicks (the hen will eventually give up, after a month or so)


Where to get chickens and accessories: local is usually best as you can see the chicks and assess their vigor and health, also allows you to just get a few (hatcheries usually add male chicks for warmth to orders of less than twenty or so) 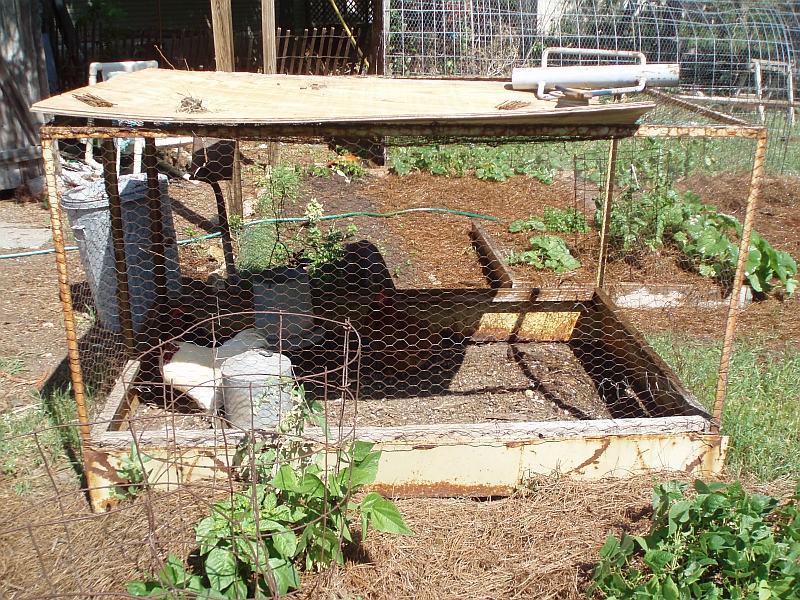 Laws:No matter what the laws are, it’s always good to be a good neighbor.  Imagine if you had a dog instead of chickens: you would keep them quiet, not have too many, and keep them in your yard.  Same with chickens.  This is especially important in areas where there are no ordinances allowing chickens as it would be easier for your neighbors to cause problems for you concerning your chickens than your dog.

There isn’t any need for a rooster.  This will go a long way towards keeping things quiet.  You don’t need a rooster for eggs - only for fertile eggs.  And three hens should be sufficient.  Depending on breed you’ll get about two eggs a day from three hens.  That’s almost a dozen a week.


And check your HOA bylaws, if you have an HOA.  The city you live in may allow chickens, but your HOA may prohibit them.


City of Austin: I didn’t find any law prohibiting chickens, nor addressing how many or of what sex, so I think they’re allowed but regulated as small animals. You can find more in Title 3 (Animal Regulations) of the Austin Ordinances.  From my reading it seems you can keep chickens (the ordinances specifically list “fowl” in some of the sections), but they must not be allowed to roam at large, must be kept in an enclosure at least 50 feet from an adjacent residence or business not counting your own, the enclosure must be kept clean enough that it doesn’t become a nuisance from odor or flies, and you can’t have more than 100, though it’d be a good idea to keep a lot less than that so your neighbors don’t lose their cool or you your sanity.  Also, the ordinances specifically prohibit noisy animals, so if you want a rooster, get a quiet one.  (That’s a joke - there ARE no quiet ones.)


City of Bee Cave: There is no city ordinance regarding chickens except that livestock sales are restricted to agricultural districts.  I confirmed with Michael Polley, Senior Code Compliance Officer of the City of Bee Cave, that this means chickens are neither allowed nor not allowed.  He told me that they likely would be considered as pets and problems would only arise if they became public nuisances.


Dripping Springs: Still not sure exactly, but according to the city secretary, they are essentially prohibited but allowable with a Conditional Use Permit.  How easy that permit would be to get I have no idea. 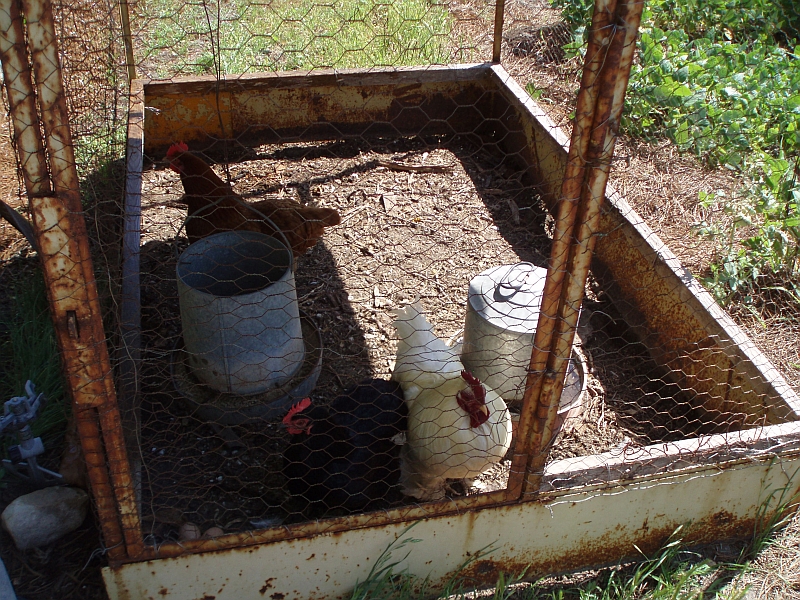