Our climate is relatively mild when you're talking about cold, but when considering the heat, it's extreme.  It's common to have more than 30 days above 100 in Summer, sometimes much more.  For instance, during the Summer of 2011, we hit 90 days of 100+.  The sun is so intense it will fade so-called "permanent" magic marker in weeks.  And with rain being rare past May or so, it's brutal.

People in a more Northern climate get a break in deep winter when it's too cold for much of anything to grow.  If they plan right, they can cover some of the more cold-tolerant veggies when the freezes start and harvest all winter.  But nothing really grows, nothing's being planted, not much is happening at all in deep winter when the ground is frozen solid and often covered with snow.  It's just not fit for man nor beast at that time of year.

Down here, it's High Summer that's not fit for man nor beast.  From about July until the end of September, it's so hot outside that things stress so much that they don't really grow - they just exist, dormantly waiting for temperatures to cool off again in fall.  We use shade cloth, seaweed, and mulch to help things get through 'til fall, kind of like Northerners using mulch, row covers, and plastic to hold mature crops for winter harvesting.  Due to the nature of cold season things and warm season things, sometimes we don't get to harvest much during this time like our Northern neighbors do.  Our plants are just hanging in there, sweating, stressing, waiting - just like us.


So we have two incredibly short frost-free growing seasons broken up by the interminable heat.  When you think of it that way, you'll see that we have to get a jump on things in Spring in order to beat the heat.  And we have to make plans to protect things into the Fall and even Early Winter in order to maximize our harvest.

Here are some things that will help you do that... 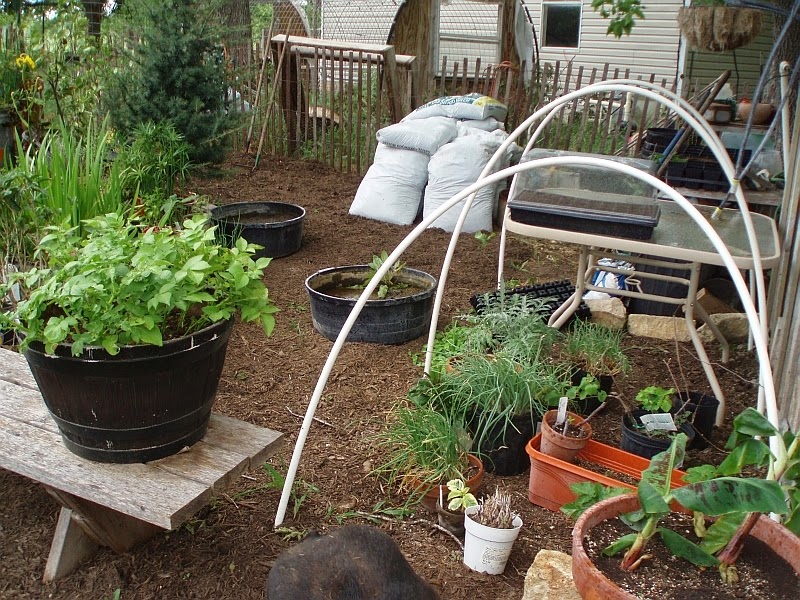 Row covers are the BESTEST THINGS!  They're most often used when cold threatens.  They work to capture the Earth's heat as it radiates up from the ground.  For this reason, you should use them by covering things like a bell, not wrapping them like a lollipop.  If you wrap a tree or plant like a lolli, you're not really covering any of the ground, so you don't get that radiant heat benefit.

I also use them to cover newly planted seeds or transplants.  They don't just trap heat - they also keep moisture in and act as a windbreak.  That's great for new seedlings that have just sprouted, and new transplants that might not have been hardened off adequately.

If you haven't seen it yet, read my post on how to build cheap and easy row cover frames for raised beds.  I give a lot more information on what row covers are and how to use them.  And you can even make a quick and dirty "mini greenhouse", like in the picture just above and to the left, using the same method as outlined in that post. 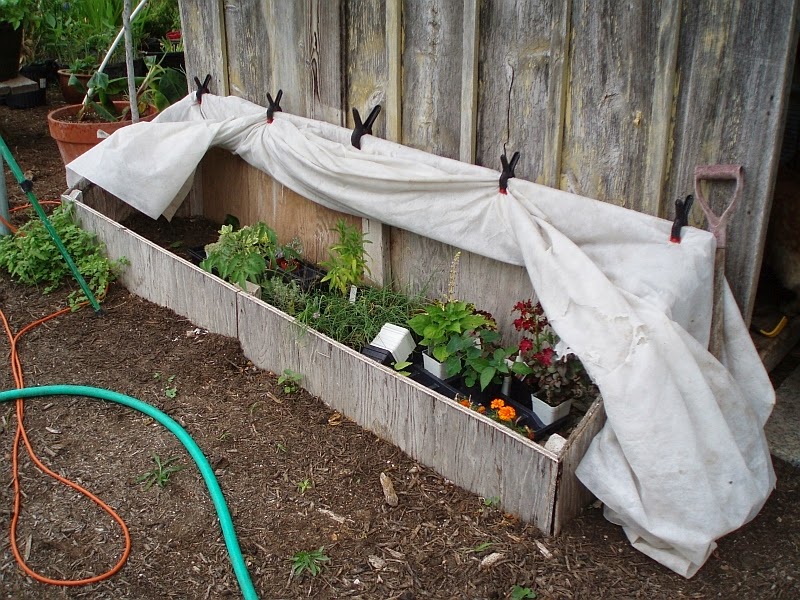 Cold frames are handy as well.  They also work by trapping the Earth's heat, but they're much better at it than a tall row cover frame since they're lower to the ground yet still have a big footprint - more ground area covered equals more heat trapped, but shorter overall means less volume of air to be warmed.  You can see that means it'll be even warmer in the cold frame than in a four-foot-tall frame covering a bed, or even in an unheated greenhouse.

And that's just if you simply put the frame on top of the ground and cover it with row cover.  If you dig a hole in the ground a foot or so deep, then cover it with a cold frame, you'll get even more warmth.  And if you use old windows or greenhouse plastic to cover it, you can expect even more heat, though be careful you don't cook what's inside.

I like to use my cold frame to hold transplants for a few days until I can get them in the ground.  Things sell out FAST at work, so I get when the gettin's good.  But holding them inside isn't really good for them what with no light and the dryness and all, and sometimes it's too cold on the front porch in the open air.  The cold frame is perfect.  Lets in some sun, but keeps in the warmth.  Easy to water them all at once, too.

It's also great for hardening off transplants you started indoors.  I think next year I might dig down a foot in my cold frame and try starting seeds right in there.  Even tomatoes and peppers.  Might work if I pre-sprout them on the heat mat.  I might can even put that heat mat in the cold frame for a little extra heat when real cold threatens.  Growing seedlings in cooler temperatures makes for a stockier plant, so we'll see what happens.

I've used incandescent Christmas lights extensively in the past.  They're easy to use, give off a good bit of heat, and most people already have them.  The drawbacks are you have to lay out a lot of extension cords, and if you're not careful to make sure the junctions (plugs) aren't laying in a puddle of water, you could get shocked.  But they'll work in a pinch.

Below are C7 Christmas lights on the left and the same lights hanging on my tomato cages on the right.  They work okay just hanging there, but they really shine when used under row covers, adding a good bit of heat to the +10° you get from the covers.  (See what I did there? *snicker*) 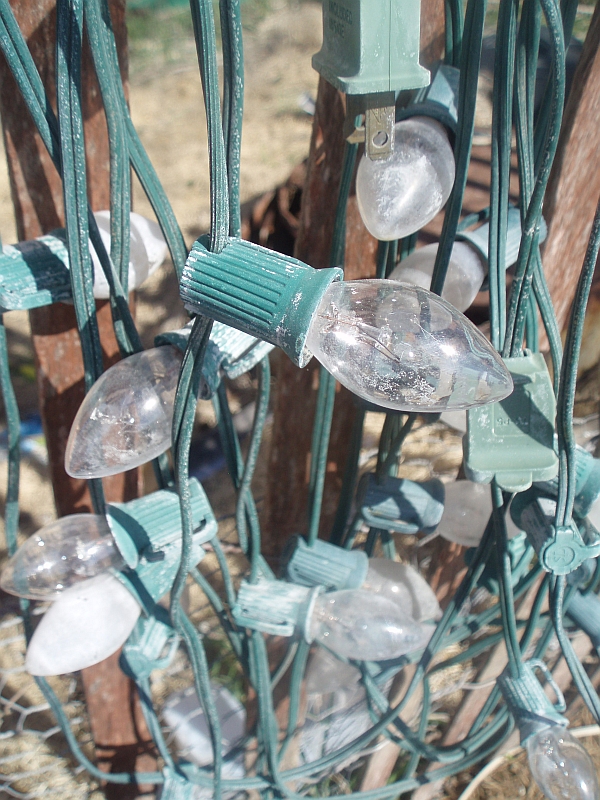 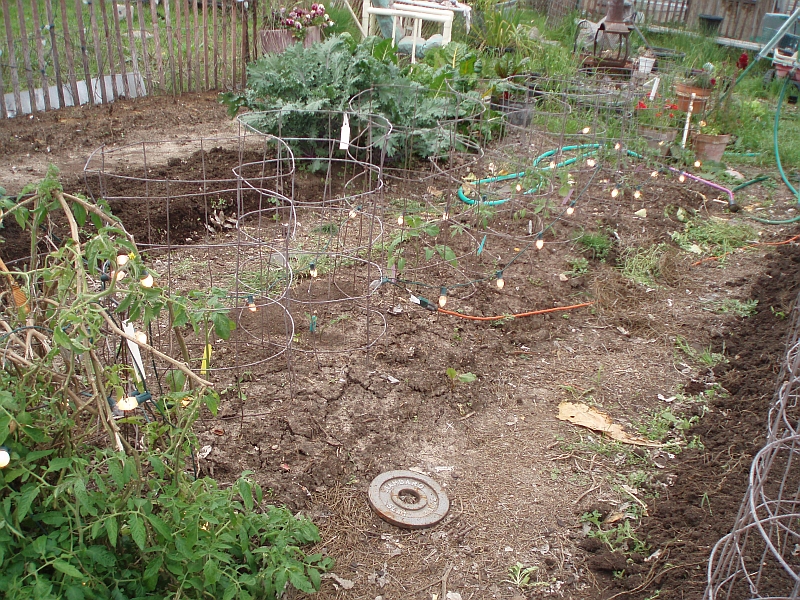 Prayer candles are a godsend (Did it again. *giggle*) when you're standing there watching the weatherman turn purple as he tells of the Arctic Blast coming your way.  You don't have Christmas lights.  You DO have row cover, but it's only good for ten degrees higher.  You quickly do the math and realize your tomatoes are toast.

But not if you've thought ahead and picked up some prayer candles!  You grab them and some clay pots, run out to the garden, bury them in the beds, and save the day!  Your homegrown tomato dreams are preserved!

For more detailed information, check out my post on how to use them. 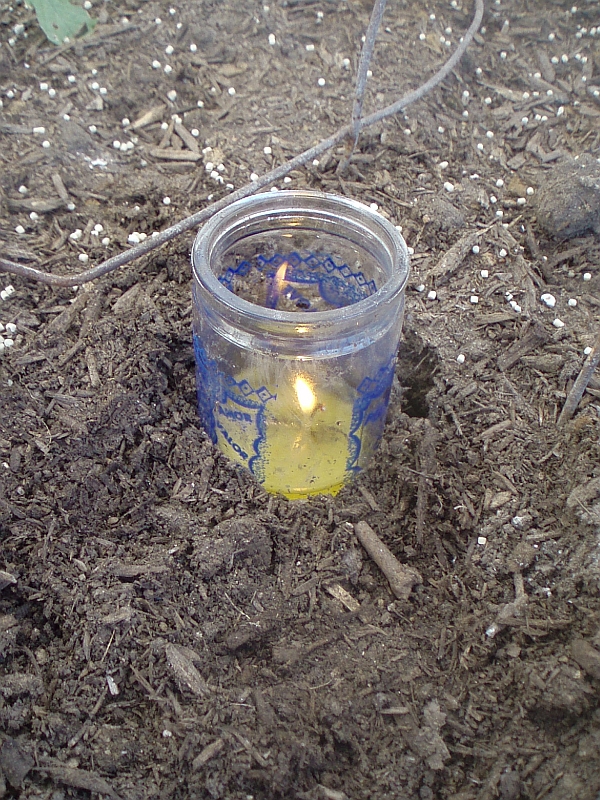 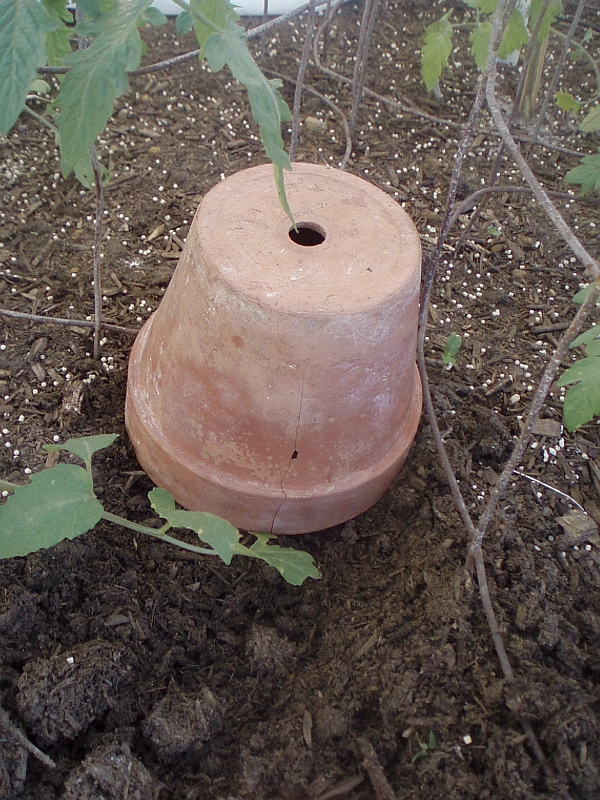 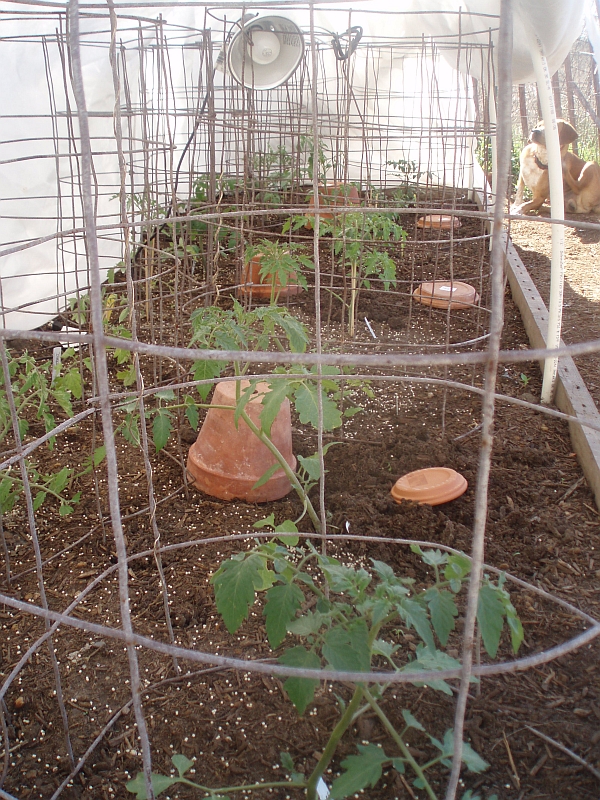 Devices to ward off heat

Remember when I said we have two short growing seasons broken up by horrendous heat?  Near the end of July it's just so hot in the garden that I can't believe anything can grow, but it does.  If you've done things right and prepared for this with lots of compost in the soil, an irrigation setup, and mulch on top, there's only one more thing you need to do to help your plants get through it: shade cloth.  Here it is in action, protecting my winter crops from an early demise due to either hail or sun: 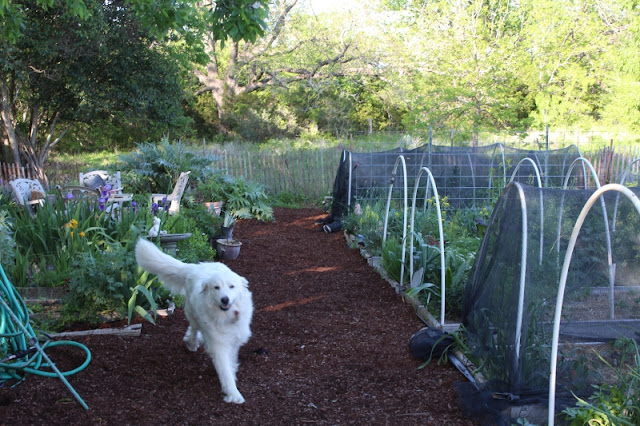 Don't get just any kind though.  Some kinds are made for people's comfort, not plants', so if you don't look closely, you may get one that's too dense and casts too much shade.  Look for 40% shade cloth.  That means it will block 40% of the sun, hence the name.  Your plants will still get 60% of the sun, and since the kind of sunlight we get in midsummer is so strong, that will be plenty.

Notice I said hail, too.  I try to keep some sort of cover on my gardens all the time, at least until danger of hail or frost is past.  When the frost cloth comes off, the shade cloth goes on.  In the photo way up there about four paragraphs in, you'll see how I simply roll up the sides of the frost cloth so I can drop it quickly when the weather man's predicting frost.  I do the same with the shade cloth.  This leaves a two or three foot wide "roof" that hail bounces off of.  In the past five years or so, they've had to replant tomatoes more than once due to hail.  I have yet to.

So next time you're out and about, pick up some supplies to have on hand when frost threatens or the sun is baking.  If you're like me, you'll forget all about it when the time comes to need them and you and your garden will be screwed.  But if you plan ahead, you're golden.