How to Get Your Tomatoes Through a Deep Freeze: AKA Homemade Smudge Pots 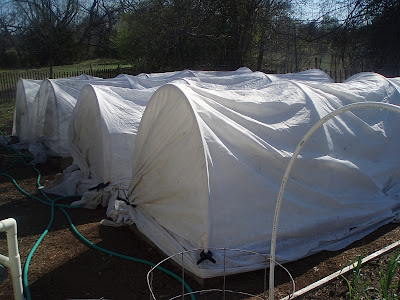 After the whoopin' Ma Nature's given me this year I've been a little downhearted.  So when the weatherman said it was going to freeze again, I almost threw in the towel on the tomatoes.

Last year, a delightful customer at work gave me a tip that I've kept in the back of my mind ever since.  She told me how to make homemade smudge pots to add a little extra warmth under the row covers on those extremely cold nights.  You know those tall prayer candles, the ones in the glass jars that burn for days?  You just bury them halfway in the ground in the middle of your beds, light them, and cover with a clay pot.  Walla!  Insta-heater, no electricity needed! 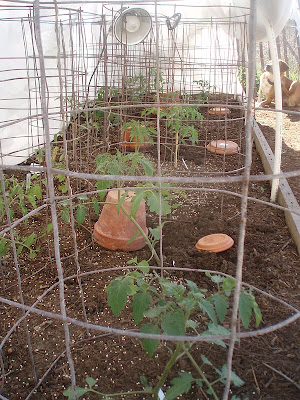 Last week, the news started calling for a cold front.  I tucked the third round of tomatoes under two layers of row cover this time (yeah, you CAN teach an old dog new tricks).  Their neighbors the peppers were treated the same.  I kept an eye on the weather all that week and every night the weatherman's voice rose an octave as he described the coming cold in ever stronger adjectives.  The night before the front was to arrive, he had me scared.

The shop light lamps I'd used before with incandescent bulbs in them didn't cut it.  One 75 watt bulb in each
bed just didn't offer enough warmth, not for the arctic blast we'd had just a few weeks ago that was about to 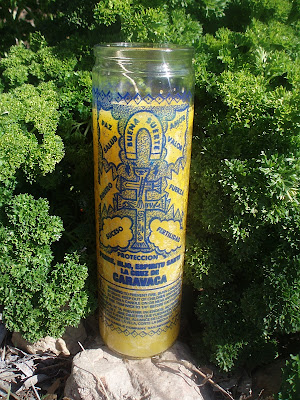 be repeated.  Yeah, I'd now added another layer of row cover for extra warmth, but I was still scared.

Sunday night after work, I made an emergency run to the local grocery store.  I crossed my fingers 'til they hurt as I scurried from aisle to aisle, looking for those candles.  Please, GOD, help me find them (I figured of all people, He'd know where they were.).  Housewares?  Nope.  Greeting cards?  Nope.  Ethnic foods?!  Nope.  You'll never guess where I found them.  Office supplies.  *scratches head*

Never mind!  I was successful in my quest!  And they were CHEAP!  A buck fifty apiece!  I bought twenty.

Hours later, after suffering through freezing (literally) temps, I had them all planted amongst the plants, all lit and happily casting a warming glow throughout.

Success.  Now, time for bed.  All tucked in myself, heater emanating warmth in the bedroom, Downton Abbey on the telly, knitting in my lap, a smile contentedly crept over my face.  Not again, Ma Nature.  I'm learning. 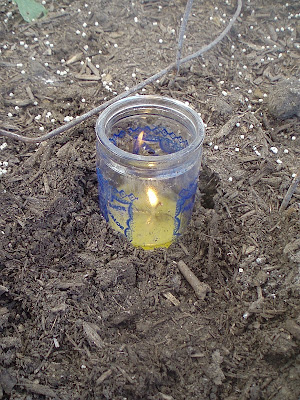 
Just dig a hole to bury the candle, leaving a couple inches above the soil surface.  Light it and wait a few minutes to make sure it'll stay lit.  This is important if the candle is brand new.  It takes a bit of time for the wax at the surface to melt enough that it's liquid enough to be drawn up into the wick, saturating it with the wax so it'll stay lit and burn all night.  Bet you didn't know that about candles, did you?  Well, I did, but I forgot.  The first two I lit went out shortly after I covered them with the pots.  I'm glad I checked them before re-covering with the row cover. 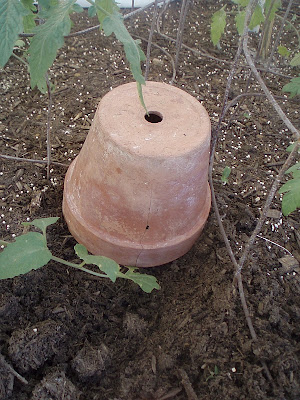 Cover with the clay pot.  Don't push the pot down into the soil.  It's better if it's catty-wampus, with some edges up off the soil creating holes where air can come in to help the flame burn (dig a bit of dirt out from under the edge of the pot if you have to).  I'm thinking this also creates a draft, moving air around under the row covers: the air heated by the candle flame rises up through the hole in the pot, and that pulls more air in through the holes near the bottom.

Extinguish them during the day if temps are going to be over fifty by putting the pot saucers on top.  The row covers will keep things plenty toasty, so there's no sense wasting the candles.

Important Safety Note: I think row covers are quite flammable, so be careful to light the candles and not the row cover. 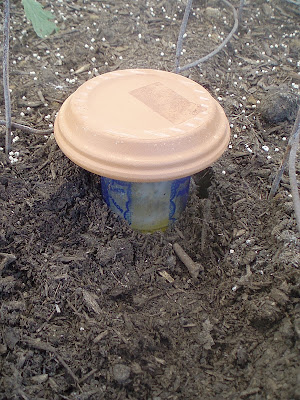 Today, after the freezing temperatures are behind us, I'm a happy little camper.  I've already been outside to peek under the covers and all is well despite the record-setting cold - 23 degrees at my house.  The peppers were a little nipped, so I think an extra candle in their bed next time would help (If you've got peppers in your bed, cluster the candles closer to them, or just put another candle in there.).  And one tomato was damaged a good bit because the candle next to it went out (I'd had trouble keeping that one going, so should have put another one in it's place. Live and learn.).

I'm so thrilled with this little idea I could pop!  I SO can't wait 'til that customer comes back in so I can thank her.

As I was out there burying the candles and freezing my butt off, I thought, "Too bad this can't be done ahead of time.  But if it is, when I irrigate, the candles will fill up with water."  *light bulb!*  Little pot saucers!  Just cover them with little pot saucers.  The ones that you put under pots to catch draining water.

As I went out today to check on things and take pictures for this post, I put a little pot saucer on top of the candle to illustrate and it even snuffed it out for me.  Genius!  I don't have to lean over and blow them out.  (Remember: I'm not lazy. I'm efficient.)

I think I'm going to use this idea in the future.  A lot.  And retire my beloved Christmas lights. 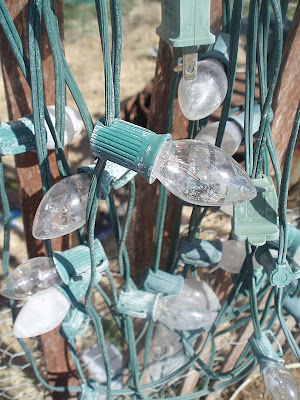 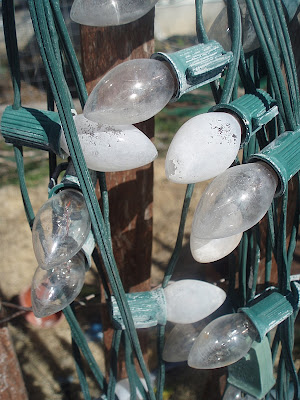