I took a seed starting class given by Jeff Ferris at work a month or so ago.  I've worked with him at the info desk and he really knows his stuff, enough to teach gardening at ACC.  AND all the plants in his garden this year are ones he's started from seed.  So I knew that even though I've started seeds for years, I could likely learn a few things from him.

"Though an old man, I am yet a young gardener." ~ Thomas Jefferson, when he was 72 years old.

Lord, don't I know that.  My seed starting has been met with widely varying success.  Every year I have high hopes, and every year Ma Nature kicks my ass.  Well, I shouldn't blame it all on Her ~ there's a helping of my own ineptness thrown in there.  I forget to water them and they crisp up, forget to open the plastic-covered hoop house and fry them, don't close the garden gate and the dogs use them for chew toys.  You get the picture.  But I don't give up.  Gardeners are nothing if not optimistic.

I had been thinking of reskinning the greenhouse for my seed starting efforts this year, but as Jeff talked about doing it indoors, I got to thinking: the best success I've had was when I did it indoors.  We won't mention the thought that I could avoid spending over a C-note and two days on that project.  Uh-uh.  Give a lazy woman a job and fifteen minutes to think about it...

For days, I kept turning the idea of inside over and over in my head.  I knew trying to do it on the kitchen counters would end in disaster.  I keep the extra bedrooms quite cold to save on the heating bill, so they were out.  And the closet, where I started some tomatoes last year, is rather full now (clean it? nope). 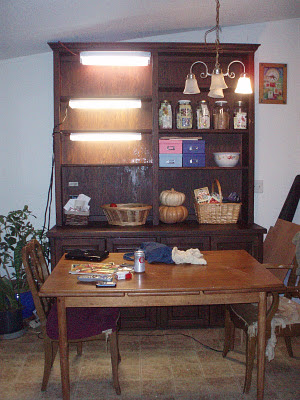 After a week or so of mulling it over, I hit on the perfect idea.  I'd bought this big old cabinet from Goodwill way earlier this year thinking it would make a good kitchen for the cabin.  Just drop in a sink, install some lights and viola!  A portable kitchen.  (I have a thing for rearranging my furniture, so the thought of rearranging a kitchen just got me all-a-tingly.)  Anyway, since the cabin remodel has been put on the back burner...

George and I worked all of a day getting the dining room cleaned out.  An extra bedroom had to be decluttered to fit in the freezers.  The fridge is still in the hallway, but we'll worry about what to do with it later.  And actually getting the cabinet in here was a bit trying ~ I almost got squashed flat twice, there was much re-nailing since parts of it fell off on the way in, and once we put the bottom cabinet in place and lifted the hutch up to the top ... it was about three inches too tall.  DAMMIT! ... Yeah, it could be placed off-center. ... NO IT COULD NOT!

Then I noticed the three-inch "lift" board along the bottom that was cut-off-able.  Enter circular saws and curse words to go with the already-in-use hammers and other curse words.

"That looks nice. Really classes up the place," George said.  I agree.

In the class Jeff said most any light except incandescents would do, but the best bang for your buck would be T8s.  So off to the hardware store I went.  Jeff said he uses 4' fixtures and bulbs, but those wouldn't fit in my cabinet, so two foot it was. If you try this at home, four foot ones will be the better deal if you have the room ~ about the same price overall, but twice the lighted area.  And freaking easier to find!  Everywhere had all sorts of four foot fixtures, four foot bulbs, four foot everything.  And two foot nothing.  Almost.  I think the world is bigoted against the two-foot-length-ed.

But I prevailed.  And came home with two of these: 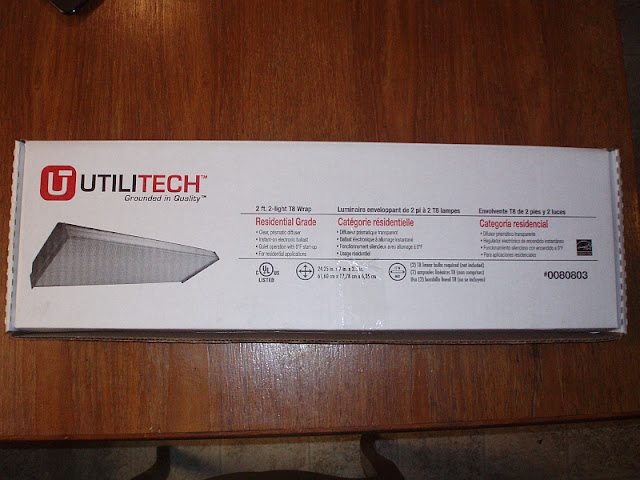 And four of these: 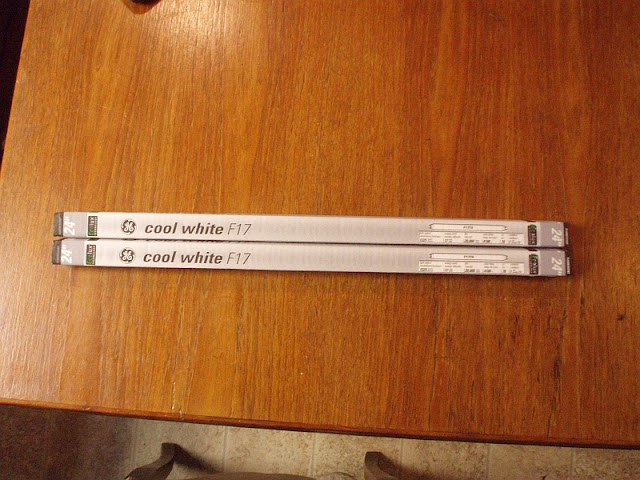 I'd learned a bit about lights when I had planted tanks and everyone in the hobby then recommended at least a 6500K (kelvin) rating.  Then there was the watt thing: how many? LOTS seemed to be the answer from what I'd heard.  I mentioned all that to Jeff and he said that in his experience, that didn't matter nearly as much as lumens.  The more the merrier with them.  Since they're a measure of the actual light output, that makes sense.  He looked up some online for me to give me a direction to go in, but when I went to look I couldn't find many in a two foot length (again sigh).  I searched Lowe's, Home Depot. Brite Ideas, and online and unless I wanted to buy a 25 count case (I didn't), the best I could find in a two foot length was at Lowe's: 1325 lumens, 4100K, 17 watts.  We'll see if they work.  (They. Will. Work. I will. Make. Them. I will Bend The Laws of Physics or WhateverTheApplicableThingHereIs with my Sheer Will and They Will Work.  Says She.  And that's all I got to say about That.)

I got them installed today.  It was great fun wiring them up and mounting them below the shelves.  The shelves are adjustable, so I can move the seedling trays and lights themselves up and down as needed.  I was a bit concerned about the "crystalized" plastic covers on the lights, but Jeff said they might not block any light, might actually throw it all around better, and they'll likely keep me from popping bulbs by accidentally spraying them when I mist the seedlings.  Bonus!

A month of planning and execution and I can see the light at the end of the tunnel (see what I did there?).

Now comes the fun part: looking through the seeds to pick out which ones to plant.  I love looking through my seeds.  I know what will happen though ~ I'll want to plant ALL THE THINGS.  Which means MOAR LIGHTS and a BIGGER CABINET.  Somebody stop me.