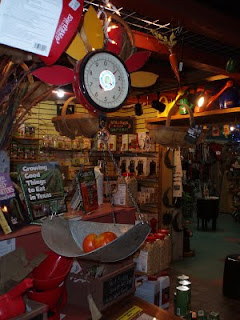 This morning, as I was setting the water on the new seeds before I went to work, I noticed some red in the Sea of Green that is the first tomato row.  Oxhearts!  That big-assed green one I've been watching was RED!  And so was it's buddy, hanging right there next to it.


*insert golden sparkles and heavenly music here*
They didn't quite look completely red.  They still had a bit of yellow shoulders and could have spent another day or two on the vine.  But I thought of Nancy, the friend and coworker who gave me the plant along with a couple others. "It's Friday," I thought. "Nancy works today, but won't be at work again until Monday.  But we're off Monday.  They'll be waaaay too ripe by Tuesday.  And I really want to share this with her."

About this time Kelly pulled up, so I had to make a decision.  What the hell.  I picked them both quick and hurried out of the garden.  I met George coming off the front of the porch, held them up and grinned the biggest grin I've had all month.  I was still so excited I don't even remember what he said, but he was amazed and agog, big smile across his face.

I got in the car and said, "Lookie what I have, Kelly!  Oxheart tomatoes.  Want one for lunch?" 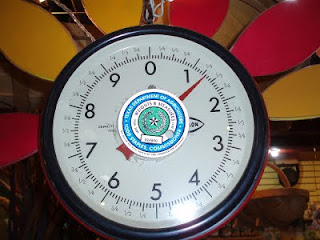 First thing I did when we got to work was head straight for the weight scales.  I hollered at Nancy to come see what I had.  She got there about the time I found out it was ...

I told Nancy it was an Oxheart from the plant she gave me and that I was sharing it with her for lunch, but first I was going to carry it around the store all morning. 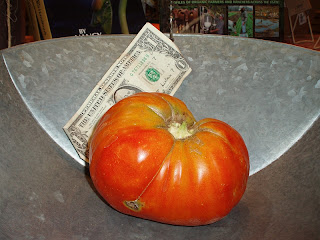 Lunchtime rolled around and I cut into it (had to do it quick before I thought about it, like pulling those damn wax strips off your legs ~ it's worse if you cringe and brace for it).  It was beautiful inside!  All meaty and juicy and RED.

Nancy took lunch before me and gave me a review: tasty, acidic, juicy and meaty.  Overall, delicious.  When my lunchtime rolled around, I found out how right she was.  Man, it was good!  I think it was still warm from the sun, too. 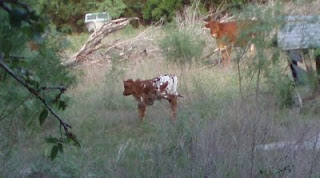 And in other news, I have a new calf!!  Born last Saturday night.

Ain't she ca-yewt?!  Sorry about the far-off, fuzzy picture, but see that red cow off in the distance?  That's her big sister.  Mama's bigger.  MUCH bigger.  With even bigger horns.  And just off the frame to the left.  Across the fence that's directly in front of me.