Growing Your Own Sweet Potato Slips 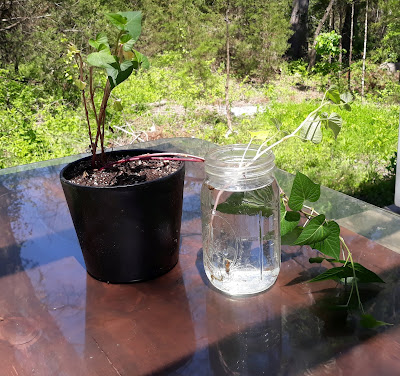 As I'm writing this, we are still in the midst of the coronavirus lockdown.  Yesterday our governor issued a statewide stay-at-home order, so all non-essential businesses are closed, and this will likely continue for a month, if not more.  Seeds and some transplants were already being sold for a while before the lockdown, so you may think you have everything you need to plant your vegetable garden.

But not sweet potatoes!  Most likely not anyway.  Sweet potatoes like really warm weather, so usually aren't sold 'til later in the year.  Mid April or so actually, and on into May.  Sweet potato slips are already hard to find in a normal year, so with all this, they're going to be even HARDER to find now.  So you may think you're out of luck for planting them this year.

Nope!  Just grow your own!

You won't believe how easy it is.  Really.  You can grow them from any sweet potato you have already or can buy from the grocery store.  Grocery stores are still open, and I don't see them closing at all.  So there ya' go!  They may be out of some things when you go, but we're not talking toilet paper here, so just check back and I'm sure you'll find them restocked.

One caveat though: Since diseases that affect plants don't transfer to people (not that I've heard of anyway), supermarket produce meant to be eaten isn't tested for them, so if you do this it's possible that you can infect your soil with a disease that will live in your soil for years.  But it's really unlikely.  I don't know of any offhand.  Still, if it does happen, most of them you can kill by solarizing the soil, so at most you'll only lose a season or two of growing time.  Or just don't plant anything in the sweet potato family for a few years and starve it out.  (In case you didn't know, that's their cousins the morning glories.  I know, right?!)

So, back to growing your own...

All you have to do is plant that sweet potato and keep it in a sunny spot.  Really.  It's that simple.  Plant it in some potting soil, pointed end down, water it well, and sit it in a sunny window or on the porch.

You can even suspend it in a glass of water with toothpicks if you want, sitting it in that same sunny window or out on that same porch.  Do you remember your mom or grandma doing that in the kitchen window, ending up with the longest and most gorgeous green vines growing up and over and around the window?  Yep, same thing.

Once you have your potato suspended in water or planted, it won't take that long for sprouts to appear.  Depending on how long the potato has been in cold storage, it could be a couple weeks, but some of mine take only a week.  But once they get going, they're going.  They usually sprout from multiple places on one end, as many as eight or more.

When those sprouts get some size on them, say more than six inches or so, break them off and put them in a jar of water in that same sunny spot.  Don't worry if they don't have roots.  They'll form them over the next week or so.

Keep breaking them off and putting them in your jar of water until you have enough.  Then simply plant them out in the garden a couple feet or so apart, keep well watered 'til the start to actively grow, and you're off to the races.

I like to plant them under my okra to maximize the use of space.  Okra plants are upright while sweet potato vines sprawl over the ground, so there is room for both in the same spot.  Just remember you'll have to water and fertilize a bit more, but I think it's worth it.  And you will, too, come Thanksgiving when you're the only one with homemade pie from home grown 'taters.