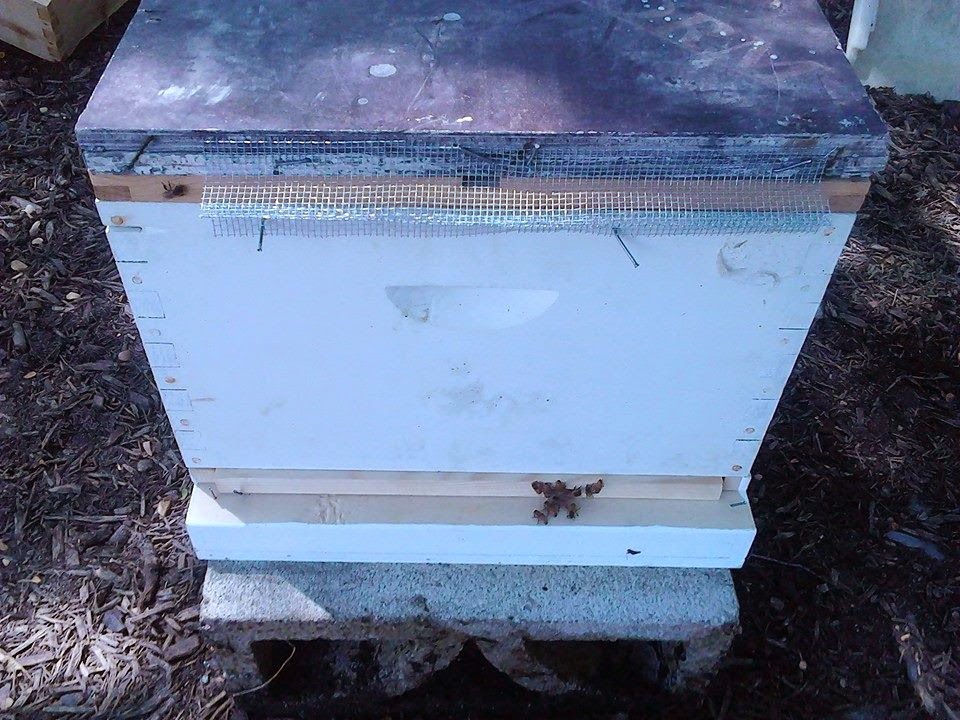 I inspected my hive Saturday, adding more pollen sub and sugar syrup.  I've been feeding them since, as a new colony, they need a little help since we've been in a dearth (no nectar or pollen) almost since I got them.  Since sugar syrup turns bad in as little as three days in hummingbird feeders, I was concerned about it in the hive as well, even though I don't add that much at one time.  I'd read about adding a tablespoon or two of vinegar to a gallon of syrup to help it keep longer, so thought I'd try it.  I'd also read Michael Bush's admonitions on the BeeSource.com forums that doing that can set off a robbing frenzy, so I watched the hive closely.

Sure enough ... a few hours later I saw what looked like a swarm all around the hive.  TONS of bees flying all over.  Probably from the bee tree across the creek, or from the one over on the Krause's place (not sure exactly where it is, but I beelined it to their fenceline last year so I know it's somewhere over in their east pasture, probably just a quarter mile from my house).

Man, it happened FAST!  I had been looking out there every ten or fifteen minutes, and between one check and the next fifteen minutes later, there was a bee cloud.  Amazing.

I ran out there and watched closely to make sure it wasn't just them still a bit upset from the inspection, saw fighting and lots of bees going in with empty pollen baskets and coming out with full ones.  Yep, robbing.  I knew because of reading everything bee-related I could get my hands on that I had to do something NOW.  I remembered something I'd read - I ran to get a sheet, covered the hive, poured water over it, watched for a while to make sure nobody found any holes I might have left open, and went back inside to think some more.  By this time it was almost dark, so that and the sheet stopped it.  For now.

I uncovered it in the morning and kept a close watch, knowing, again because of what I'd read, that there was a very good chance it would start again.  Sure enough, once the sun got up a bit it started again.  But I was ready.  I robbed a piece of 1/8 hardware cloth off a top feeder I'd just bought, made a Billy Davis robbing screen (thank goodness I'd read about THAT one, too) to cover the top entrance that was getting the most action, and reduced the bottom one.

It did just what I'd read - the robbers kept trying to get through the robbing screen directly in front of the entrance, not even finding the open ends.  In just a few minutes, there was a mob of them right there at the hole.  I watched for quite some time, grinning and laughing at them (yeah, schadenfreude - I had it), seeing that some robbers who were coming out of the hive got lucky and found the end exits to get out, but none that I saw figured out how to get back in.  I watched for a bit 'til not many more were coming out, and covered the bottom entrance with wet towels, as well as the ends of the robbing screen, leaving the area over the top entrance open for ventilation (didn't know how long I'd have to leave them like that and was nervous about them overheating).

I went back inside, but kept a close watch on them still.  By nine or ten the bee cloud was gone.  I left it covered for a couple or three more hours, then uncovered it and kept watch closely, thinking I may have to cover it up again.

But it didn't start again!  WOOT!!  Started about 7:30 the night before and was over by noon the next day.  Now, two days later, still no robbing and the girls are still in there, happily working away (yeah, didn't want to disturb them even MORE, but I just had to peek a little).  I'm still looking out there every fifteen minutes, and likely will be every day for the next week or more.  But I'm cautiously optimistic.  Excitedly, but cautiously.

Because I'd read all that, I didn't panic because I knew there was a solution and it was in my brain because of all the reading I've done on forums, on Michael Bush's site, in LoneStarFarms.net's books, and elsewhere.  I just had to stay calm, think for a minute, and find that solution.  And I did.

Some pictures of the hive today with my handy dandy robbing screen.  I've got some more hardware cloth on order and will make one of these screens for every entrance on every hive I ever have.  Billy Davis, you are one smart man. 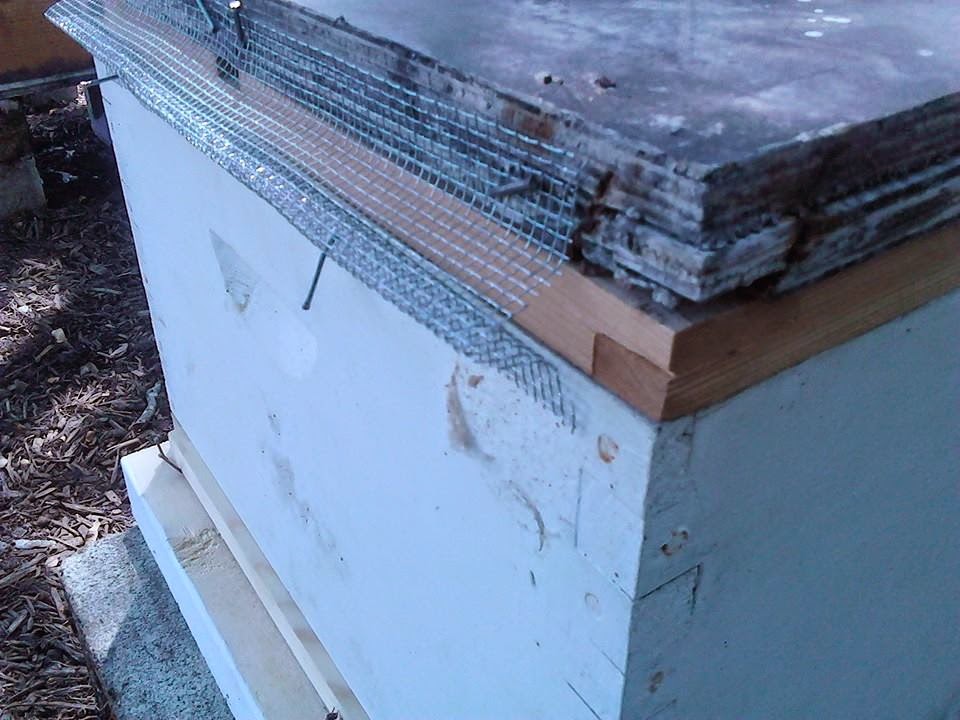