Tomatoes are finally all in the ground!

And here they are, right before planting, being photobombed by a jealous pepper:

I also got the new flowerbed planted.  The gladiolas I planted last week are coming up. YAY!  They are my favorite flower (Well, at least one of the top three...).  I also planted zinnias, cosmos and Hopi Black Dye sunflowers in there from seed, along with a couple of Gerbera daisies from transplants.  I need to get more of those. 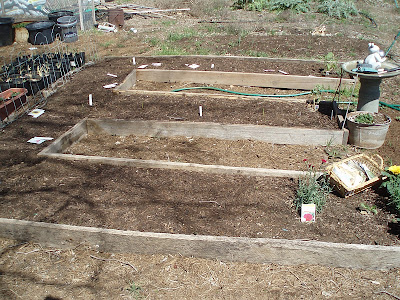 The herb bed next to it is coming along.  Planted some stevia just behind the moon face.  Later, I hung some Christmas lights across the garden shed to the left of this bed and carried them across to the post in the pic and down into the bed itself.  I had one little string of blinky lights, so tucked them under the front of the curly parsley.  As I was sitting out there having a beer just after dark, I noticed it looked like a miniature forest under there.  So magical!  I need to put a tiny fairy house in there with them. 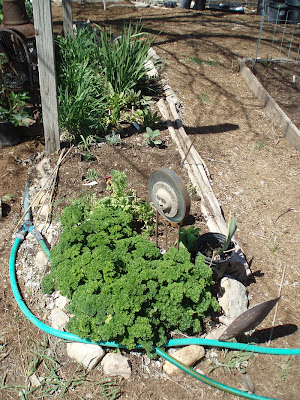 The potatoes are sprouting, the leeks I planted last week are doing well after the move...

... and the rest of the winter veggies are still doing great. 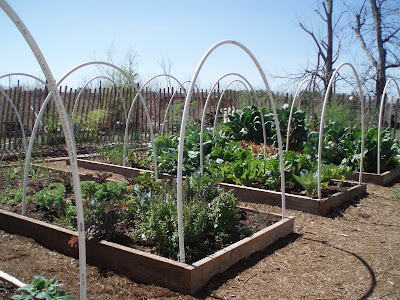 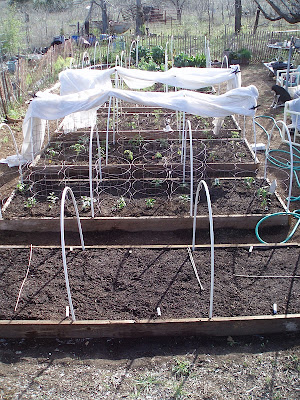 Right now, the first three beds at the top of the picture have the winter veggies in them, fourth bed coming this way has potatoes and leeks in it, next two beds contain tomatoes (I was a good girl and kept it to only 36 plants this year ... so far.), the next bed is peppers (second bed from the bottom of the picture), and the last bed has early bush beans and squash.  I'll plant some cukes in there, too, once I get some seeds.

I'm so excited about these raised beds!  I can pack so much more stuff in them than in the wide rows I had before.  Once I get the next four beds done along with some one-foot wide ones along the fenceline, I'll have room to plant everything I want to this year: more bush beans, yard-long beans, okra, purple hull peas, luffas, lots of basil, sweet potatoes, corn and more summer and winter squash, including spaghetti squash.  I'd found it hard to fit everything in before.  Not anymore!

Of course the warm season crops going in means that the cool season things are on their way out.  Bummer.