I have this bad habit of bringing in the harvest from the garden and not doing anything with it.  I have a few things I know exactly what to do with (I'm looking at you, collards and ham hocks...), but I keep doing those same things over and over again, rarely varying.  Can you say "Boring!"  I think it's because when I do try to vary, to expand out and stretch my recipe repertoire, I have more misses than hits.  So the veggies sit and wait, and wait ... and wait ... 'til inspiration strikes me.  By the time that happens, the veggies are past their prime, making for a rather lackluster performance in the pot, through no fault of their own.

I think part of the problem is not knowing what to do with them.  I think, "I really should find a recipe and try something new."  But I know that finding a recipe is only part of the process ~ there's also wading through that mess of a spice cabinet to find something suitable that might enhance the dish.  Trying to find inspiration by digging past the bottle of cardamom with a teaspoon left in it, behind the hard red lump in a jar that used to be fajita rub, and between the two bottles of ancient turmeric (from Mom's cabinet, and she's been gone nine years. Ack!) just sounds worse than cleaning out the junk drawer.  It seems such a daunting prospect that I just give up before I even get started. 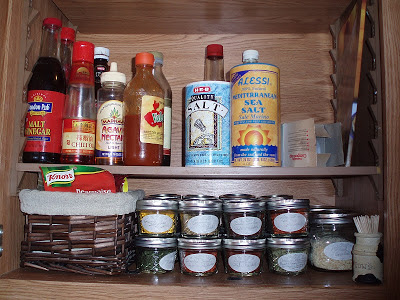 You know exactly what I'm talking about.  Admit it.  You know you should get rid of that pumpkin pie spice that's been sitting there since 1983, the last time you tried making Thanksgiving dinner completely from scratch.  Then there's that jar of cream of tartar your neighbor gave you after she found out meringue just isn't her thing.  And you know all those envelopes of dip mix and soup seasoning should be thrown out, but you just can't because they came free with that bottle of mayo!  And it's a sin to throw out something free!  Almost as much of a sin as throwing away something that's still good!  So you can't get rid of anything in there!  Not today!  Maybe tomorrow! When you have time to go through it all and see what's still good!

You, like me, likely know that most herbs (the dried leaves of seasoning plants) really start to go stale after about a year, and spices (ground seeds, roots, bark, etc.) after two.  Whole spices last longer than that, but not nearly as long as we've been hanging on to them.  So I'm giving you permission to chunk them, and some helpful tips on the easiest way to do it.

First, go to the bulk spice aisle at the grocery store and stand there for a while. Admire the organization, look at the colors, drink in the scents.  I was there yesterday, looking at all the containers containing all the lovely scents and flavors, feeling the possibilities.  Oh, the possibilities!  Steaming plates of ... warm bowls of ... aromatic spoonfuls of ... .  I made up my mind right then and there: Nigella Lawson here I come!

After I chose the things I was familiar with (celery seed, dill weed, Italian seasoning, thyme...), I picked a few things that I knew a bit about, but seemed a little different (sweet smoked Spanish paprika, herbs de Provence...).  I thought I was done and started to walk away, but stopped.  I wanted to be free, adventurous, gutsy.  I wanted to expand my cooking skills.  I wanted to be Nigella, right? 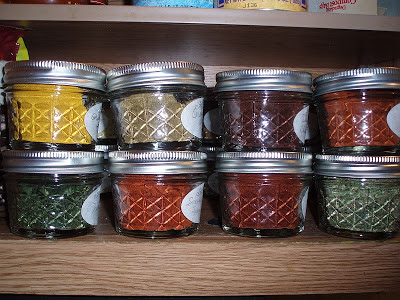 I went back and reached for the pretty colors.  I picked them up and smelled them, letting the aromas decide for me.  It's the bulk aisle ~ I could get a little bit of anything I wanted for less than a buck, sometimes way less ~ so I let myself go.  Anything that smelled good, I got some of.  What fun it was once I really let go and just did it!

Nineteen little baggies, twelve little dollars, and forty-five little minutes later, I was done.  I wheeled my cart and my new determination over to the canning aisle to get some jars.  If you keep your herbs and spices in airtight containers, they last a lot longer.  Plastic doesn't cut it ~ it's gas permeable.  And I didn't want to have a pile of baggies to look through.  I wanted easy-to-find.  And pretty.  I found some 4 ounce jars and got two dozen (eight bucks a dozen ~ cheap), along with a few larger jars for the things I bought a lot of (minced garlic, onion flakes).

Once I got home, I grabbed an empty box and headed for the spice cabinet.  I took everything out.  Once it was all there, sitting on the counter out of it's normal home, most of it looked like what it was ~ stuff that needed to be chunked.  It was wild ~ just getting it out of the cabinet made all the difference.  Suddenly it seemed easy to get rid of.  But as I took each jar in hand, looking for things to put in the box, I started wanting to keep things I knew I shouldn't.  So I changed my outlook and started to look for things to keep.  That's the ticket!  I picked out half a dozen envelopes and three jars to put back in the cabinet, washed out the shelves, and put everything else in the box.  Done. 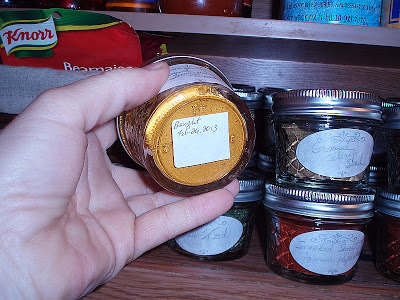 Helpful Hint Time: If you normally have a hard time getting rid of things, tape up the box and put it in the closet for a month or three.  Then, before taking it to Goodwill, try to think of anything that's in the box that you want to keep.  If you can think of something, you can have it, but nothing else, no matter what. NO. Matter. What.  Thanks to that hoarding gene that runs in my family. I have a tendency to keep things too long.  This strategy has helped me immensely in getting rid of things I never thought I could.

Now comes the fun part: putting all the treasures in the jars and lovingly labeling each one.  The jars came with cute little labels, but I got some different ones I liked better.  Whatever works for you.  Just make sure to also date them.  I didn't want to write that on the label on the front of the jar since I'd have to cross it out as I refill the jars.  After a while, there wouldn't be any room left on the label, and it'd make it look messy.  So I put more labels on the bottom of each jar for dates.

It's so nice now!  When I open that cabinet, I see all the pretty colors all stacked neatly on top of each other, ready to be used in my next masterpiece.  I feel like I just might be capable of making that masterpiece now, or at least capable of not screwing up as much as I used to.

Wheeeeeeeee!!!!!  I can't wait to cook now!  So I'll see y'all later.  I'm headed out to the garden to find something to pick.

Email ThisBlogThis!Share to TwitterShare to FacebookShare to Pinterest
Labels: Cooking