Man, the tomatoes are really coming in now!  Just look at how many I picked Thursday night.  We amended a couple more beds, planted a few more things (two Sugar Baby watermelon plants, a package of red seeded yard long beans from Kitazawa seeds [yes, more yard longs], and a bunch of orphan plants from work), harvested some of the garlic and picked a LOT of tomatoes.  You can see all sorts in the baskets in the picture, along with some onions I plan to use in sauce.  Underneath the hat (and booze) are a dozen or so bulbs of garlic, some of which will go in the pot, too.

The garlic did pretty good.  I planted a hundred each Inchellium Red and some other plain white garlic from work last October.  I'm leaving the plain white for a little while longer since it was still quite green, but the Inchellium was falling over, so we pulled it and got about 75 bulbs that made cloves, some small and some large.  I planted probably twenty really small cloves that I didn't expect to make much, so all told that's a good harvest.

I kept out a dozen or so of the biggest bulbs for replanting next year.  Some stems broke off the bulbs when we pulled them, so those came in the house with me for cooking first (I'm thinking trim the pointed top, stick a pat of butter on it and bake).  And the rest were braided.  I'm not sure if I did it right and the braids may fall apart before too long, but at least they're all not laying on the ground. 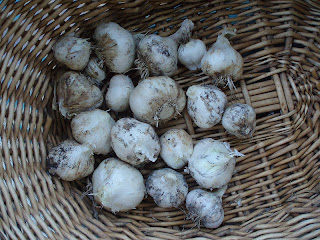 Overall, not bad for the third try.  First try, I left them in the ground waaaaay too long and the wrappers rotted away.  Second try, it got too hot way too early and they never made cloves.  So I'm happy with this year's gain.

Garlic is a member of the Holy Trinity of Cooking, so I'm not giving up on learning to grow it well.  And to find the perfect types for this area.  I hope to order some different ones from Gourmet Garlic Gardens this fall.  I also picked up some bulbs from a little old man at the farmers' market last week who said he's been planting it for thirty years, so long that he's forgotten what kind it is.  It's purple striped and looks like a hard neck, but I may be mistaken.  He said to wait until the first cold snap to plant it so it'll sprout right away.  Sounds like a good tip to me.  Faster sprouting = less time sitting there in the ground, getting exposed to disease and rot.

Speaking of that Holy Trinity, I've still got to work on growing onions better.  I think I'll order some sets from Dixondale early this year and get them in the ground as soon as they'll send them.  Got that tip from another grower at the market who was selling some gorgeous whoppers.  She said it was her first try at onions and got them in the ground in December.  Gonna' do that next year for sure.

Peppers, the last member of the Trinity, I think I have by the balls.  Check out the bell peppers in the picture on the left, and the one in the picture below.  It's as big as a baby head!  FINALLY I've figured it out.  Acidity.  They like acidity.  I read about that online, on a guy's website who had pictures of plants with beautiful colored bells dripping off his plants.  With success like that, you don't argue much. 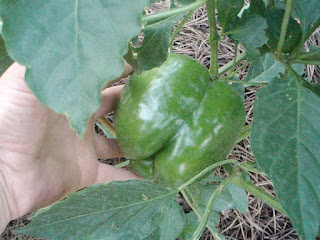 I put two 2 cubic foot bags of acidified cotton burr compost in the 2'x12' or so row the bells are in and they are going ca-RAY-zeee!  ALL eight plants.  In years past, I'd get maybe three or four sick little bells per plant per year.  Not this year.  I have that many on each plant already, and they're all whoppers.  Besides the ones I started from seed, I bought four plants of two types of bells at work and planted one of each in the acidified bed and a non-acidified bed.  So far, the acidified ones are doing much better.

The rest of the peppers, things like jalapenos, poblanos, cayennes, etc., I've had good luck with ever since I started feeding them extra nitrogen.  They just produce and produce and produce.  But the bells stymied me.  Not anymore.  HeeheeHEE!

The jalapenos, cayennes and poblanos are doing well.  The plants are just covered with fruit.  I want to make ristras with them.  Next year I think I'll grow a lot more of those.  I'm thinking Christmas presents.  Chili ristras and garlic braids.  Ooooh!  Garlic braids with three or four kinds on them!  And handmade parchment labels telling which kinds of garlic are on it!  Yeah.

The NuMex Joe E. Parker anaheim isn't doing so well ~ one fruit on the one plant.  Don't know what went wrong with it.  Could be just a bum plant, or maybe it just takes a bit longer to get going.  The one pepper on it does look good though!

And the tomatoes.  Man.  I have so many of them I don't know what to do with, so while preparing the Principe Borghese and Red Figs for drying, I eyed the Brandywine Blacks and Snow Whites and thought why not?  I cut them all in two, tossed them with some peanut oil and coarse sea salt, popped them into the oven at about 175 ... and proceeded to wait, and wait, and wait.  I checked on them every twenty minutes or so for four freaking hours ~ still not done.  By that time it was kind of late, so I kind of forgot about them.  Ooof.

But they were still great!  The little Snow Whites were a bit too burned.  They're a sweet tomato, so don't take well to a bit of blackening apparently.

But the Brandywine Blacks were FABULOUS!  And the little Figs were even better!  Up 'til now, I'd thought the Principe Borghese were good.  Nope!  I'm thinking I may not even grow those anymore, replace them with the Red Figs and Brandywine Blacks for drying.  Yep.

So I tried this drying thing again tonight.  Caught them early this time (mostly) and I also learned my oven gets hotter in the back than in the front.  Makes sense, seeing's how I left the door open a bit.  I need to remember to turn them halfway through the process.  This time, I turned them up to 200 so it only took two hours.  Surprise!  Ooof.  But no matter.  The Snow Whites are perfect!  No salt on them.  They're fruity sweet, so I didn't think that would be very tasty.  Turns out to be a good call.

I also talked to Marlena at the market today and she said a gas stove is much better for drying ~ just put them in and let the pilot light do it's thing.  Man, I miss my gas stove. But I get to have it back once I get moved into the cozy cabin!  Soon.  Very soon.

She also said don't bother with the oil and salt.  So I didn't on tonight's round.  Not bad.  And easier.  I like easier.