For the longest time, I've been fascinated by mushrooms.  The sizes and shapes and colors I would find walking along the creek always gave me pause. 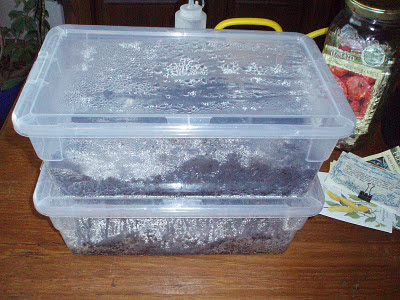 I had to stop, look, pick, dissect, and wonder just what kind this thing was.  I did research online to learn more.  Found out the mushroom was actually the bloom of a "plant" that was growing inside the tree or under the leaf litter level of the ground or in the manure deposited by the horses, that it would produce billions of spores that would be dispersed in the air all around, an invisible cloud, to fly on the wind or be carried off completely unawares by a little animal.  A precious, lucky few would take up residence somewhere similar to their "mother", grow unnoticed until conditions were right, then bloom and start the whole cycle all over again.

When the bug would hit, I'd read about how to grow them and dream dreams of becoming a mushroom farmer, spending my days tending my logs, inoculating new ones, and collecting my harvest.  Some mushrooms grow in manure, but others grow in wood, and still others grow in soil rich in organic matter.  So my dreams were populated by raised garden beds full of shit, bursting at the seams with 'shrooms, all lined up next to my veggies (that also produce mushrooms popping up in between the tomatoes).  And logs hanging from the trees above the creek, just waiting to be dunked down via their rope hangers to soak in the creek.  And, my favorite dream, an entire gazebo made of oak logs growing shiitakes.  I even thought of just inoculating everything in and around the creeks to let Ma Nature do the work for me (This dream almost became an obsession when I once found morels growing in a cedar break.  Yes.  Morels in Texas.  My Michigander brother in law confirmed it, but I still waited 'til he ate some and didn't die before I did.).

But, like so many things, I never found the time.  So I put "Growing Mushrooms" on my "To Do Someday" list and went on with the "To Do Today" portion.  Every few years, the idea would pop back up and take over my imagination for a while.  I'd read some more online, thinking maybe I could do it now if I rearranged some things, or found an easier way.

About a year ago, the mushroom bug came back.  I reread what I'd read before, but this time happened upon a post on some mushroom growing forum or another about growing ones from the grocery store on coffee grounds in a jar.  I could do this!  I got my jar, I got my grounds, and I got my grocery store mushrooms.  I picked ones like the post said, ones whose butt end wasn't trimmed, ones that looked like there was still some compost and mycellium on there that wasn't all dried out.  I even paid for pieces of the stem that didn't have a cap on it.  I got them home, put them in my jar and waited.  Little white things started growing horizontally from them, about an inch below the surface of the grounds where I'd "planted" the pieces, out to the edges of the jar.  Then stopped.  I added more water.  Still nothing.  I aerated them by taking the lid off for a while.  Still nothing.  I got busy with other things in life, neglected them, and gave up.

A month or so ago, we got a mushroom growing kit in at work from a business who wanted us to buy them to sell.  It was a brick of coffee grounds wrapped in a plastic bag and inoculated with oyster mushroom mycellium (the growing body of the fungus).  It was white and orange and all manner of shades in between.

Nancy at the info desk cut lines in the bag as was directed, soaked it in water (had to weight it down to keep it from floating), then put it on the info desk shelf in a bowl with some water in it and kept it misted with the little mister bottle that came with it.  In a few weeks it actually sprouted mushrooms!  Not a lot of them, but enough to make a lot of us talk about it.  And enough to pique my interest.

She gave it to Auscencia to take home, but before it went I broke off a little corner of it, took it home, put it in a new jar of coffee grounds and waited.  And waited.  And waited.  Little white areas grew to the right and left of the piece I'd added, but then just stopped.  I did all the same things I'd done before, but still no 'shrooms.  I was nervous because this was a type of mushroom that I hadn't been able to find untrimmed at the grocery store, so knew it would be harder to get a culture of it again.  I didn't want to lose it and have to pay a hunk plus shipping for another start.  I'm frugal (what a fancy way of saying I'm cheap) and this was a free start, so I really didn't want to give up on this this time.

I got to thinking ~ the culture at work was growing on a brick laid kinda' horizontally, not a vertical mass in a jar.  Maybe that's the way they preferred to grow?  And maybe the verticalness of the mass of grounds in my jar was making the water I added drain down to the bottom, so the part above would be too dry and the part below would stay too moist.  I mean, the mycellium in the jar was growing to the right and left instead of up and down.  Even over a couple months, it didn't grow anywhere other than to the right and left.  Maybe down was too wet and up was too dry?  And the mycellium on the brick seemed to be closer to the surface than an inch.  Heck, it was on the surface, from what I could see, and a little bit underneath it.  Maybe I was "planting" them too deep from the beginning.

I thought, "I'm going to lose this culture anyway if I don't do something, so why not try it."  I got a clear plastic shoebox, washed it out well, dumped in the contents of my jar containing the mushroom culture on one side, saved coffee grounds from my own morning ritual as well as from work on the other, put the cover on the box and waited.

This time I didn't have to wait long.  Within a week, there was quite a noticeable difference in the culture.  There were white areas growing all over and in the grounds!  Not at the very bottom, but all over in the top inch or so.  Woohoo!!  I'm growing mushrooms!!

Buoyed by my success, I headed back to the grocery store for another round of Portabella butts.  I trimmed off the bottom inch of stem and set them up in another plastic shoebox with a couple inches of coffee grounds.  This time it took a bit longer to see a difference, but a couple weeks later and man, they're growing crazy!

I think I've finally figured this out.  I can't wait for them to fruit.